Jet-setting liberals “said it was the first time that it was sort of chilling.” 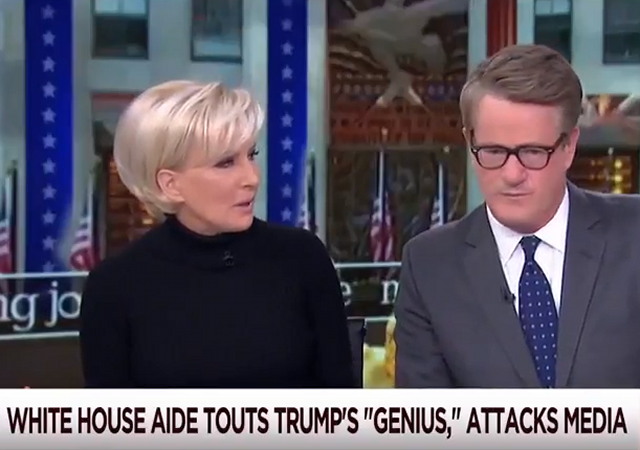 Bad news, everyone. We have failed Mika Brzezinski’s wealthy liberal friends. When they jet off to places like Paris, they are embarrassed to be Americans. Now we’ve done it.

In the months since the election, Morning Joe on MSNBC has become a one stop shop for Trump Derangement Syndrome. In this instance, Mika Brzezinski really went out of her way to show how in touch she is with average Americans.

“Morning Joe” co-host Mika Brzezinski said her jet-setting friends are embarrassed to be Americans while discussing if there was any reason for optimism in the Trump era on Monday.

“I had some friends that went to Paris over the holiday… and they said they were just viscerally embarrassed to be American,” Brzezinski said.

The MSNBC star’s co-host and fiancé, Joe Scarborough, perhaps realizing she wasn’t speaking to the average American, tried to intervene with a joke, asking, and “Paris, Texas right?”

“Paris, France,” she responded. “They said it was the first time that it was sort of chilling.”

Brzezinski said her friends “didn’t even want to share” that they were on vacation from the United States.

Amber Athey of the Daily Caller makes an excellent point:

Maybe Mika’s friends should stay in Paris if they’re too embarrassed to admit that they are American. We might be better off.

A great point is made here:

Any friend of Mika Brzezinski is probably predisposed to being viscerally embarrassed to be American, and have felt that way for years!

When @morningmika says her friends were embarrassed to be Americans during their holiday in Paris…https://t.co/y48hLs2WF3 pic.twitter.com/zHnWFF30K8

There’s a great episode of the Simpsons where Krusty the Clown decides to try stand-up comedy. He asks Jay Leno for some advice and then reveals how out of touch he is:

“These days, people like observational humor, about things they deal with in everyday life.” – Jay Leno
“Oh, yeah, you mean like when your lazy butler washes your sock garters and they’re still covered with schmutz?” – Krusty the Clown
“Well, kind of.” – Jay Leno

well, her friends could always stay there? Poor Mika can join them along with that foppish man/boy next to her. The aggregate of Liberal arrogance has yet to equal intelligence.

I would hate to be known as Mika Brzesiniski’s friend too! Actually, I didn’t know she had any friends – it’s not openly spoken of in polite society.

liberals are ALWAYS embarrassed to be Americans…but they just won’t leave!

I’ll bet the 3 men on the 15:17 to Paris weren’t embarrassed to be Americans.

I was going to say I defend Trump every time I go to Paris on business even if it’s not good for business. Not embarrassed at all even though I rarely meet someone who gets him in Europe. (Brexit voters do).

However this response wins the day. Americans been saving France since WW I. Someone needs to remind Mika of that.

Well not untrue, let us not forget that if not for Lafayette, Rochambeau, deGrasse, and the French navy (among others), we’d be going to the loo today.

Mika that’s funny, we’re embarrassed they are Americans too.

On a completely unrelated note, are you aware that when Joe goes over to the Hannovers pool, he spends a lot of time complaining about your uhm hygiene? How do you feel about that Mika?

…well, at least he’s not the turning up at galas bleeding from the face. That’s embarrassing.

The clock is running out for Joe. He won’t be stuck with just her, but with her friends too. Like the ones who are embarrassed to be Americans.

I don’t care how miserable his life is right now, it’ll get a whole lot worse.

The people who should be embarrassed are the cheese eating surrender monkeys of France who have allowed large sections of their major cities to become “no go” zones for the ethnically French. They are losing their country and culture as they sit in their cafés drinking wine, discussing everything except that in another generation the women on the streets will be wearing black sheets head to toe, instead of their fashionable gowns.

What you note should indeed be embarrassing… even more embarrassing when you consider this is the third time in modern history that they’ve rolled over, piddled the rug and surrendered. Is it possible they’ve actually evolved to enjoy being raped?

What’s worse is that – again – America will pull their irons out of the fire when the time comes. NO president will say “no” to that. So, – again – our blood and treasure will be spent on those who in peacetime despise us.

Were I president when the time comes, I’d tell them, “not this time; you’re on your own. Maybe Germany will help you out.”

Second time. The French fought valiantly in WWI. They very well may have genetically lost the best part of their manhood as a result of the massive loses they took due to the idiocy of their generals, but the men themselves were magnificent.

I will be visiting Paris briefly, and I just hope there is a bit of the old Paris left. This will probably be the only chance to I have to see it. The shame of it is, I have to wonder if it is safe. I guess wealthy people don’t think that way. They are too busy being concerned about what Parisians think of them.

I would think that Mika’s friends would be kneeling before their French Muslim Masters. Perhaps they feel rejected?

Were they also friends of Lori Klausutis?

It appears that Gershwin’s classic composition, “An American in Paris,” needs to be re-titled “An American Elitist Idiot in Paris.”

Considering that large segments of Paris are Paris-istan, I ‘d say ‘fearful to be American’ would be more prudent than a childish embarrassment.

I’m calling FakeNews on Mika. She made up these “friends”. They don’t exist. Else, bring them on the show or identify them. America wants to know who these people are.

Whew, I thought for a minute there that Mika’s “friends” were going to be messing up the good Paris. I wonder if that Asian place is still open? It was a buffet, but it was still good.

I am embarrassed that Mika Russianame and her marxist friends are Americans too. I would love to vote them all “off of the island.”

If you’re ashamed of being an American, don’t.

Did anyone else notice that her friends haven’t encountered any increase in anti-American sentiment? They’re just suddenly embarrassed to be Americans. It quite literally appears to be all in their heads.

I wonder if the friends were acting like the “ugly American”.

When I went overseas for business, I was told about the cultures and how I should conduct myself so that I didn’t embarrass myself as well as the company.

If those friends are embarrassed because the POTUS is “deranged”, “dumb”, or otherwise eligible for removal via 25A, they should take a look at the hour long video feed from the cabinet meeting room just completed. (I saw it on Fox, don’t know if other outlets covered it.) POTUS looked pretty alert, able to formulate thoughts, react to comments from the assembled lawmakers… He pretty well kicked the $h!t out of the 25A theory.

This may be off-topic somewhat; feel free to consider it with whichever recent post here that it fits for you. 🙂

Bozozinski forgets that not long ago, the likes of her rich French liberal friends were being lined up and executed on the guillotine.

Great Twilight Zone episode: Bozozinski fantasizing she his royalty, falls asleep during makeup (after abusing her assistant) and dreams she is Marie Antoinette – on the guillotine. The problem is, she doesn’t wake up.

Let Americans eat cake. Right Bozozinski? Off with your head.