Welcome to Texas, where politics are a blood sport and nothing, and I mean nothing is off limits, including crepes.

A day after Blocker announced his candidacy, Miller threw his first jab via Facebook:

“What in the world is a Nutella banana crepe? More importantly, where in the heck did my opponent go to stage this photo op? Probably some Yuppie Austin Coffee Bar. Man of the people? I’ll stick to biscuits and gravy! #LowLevelLobbyistTreyBlocker” 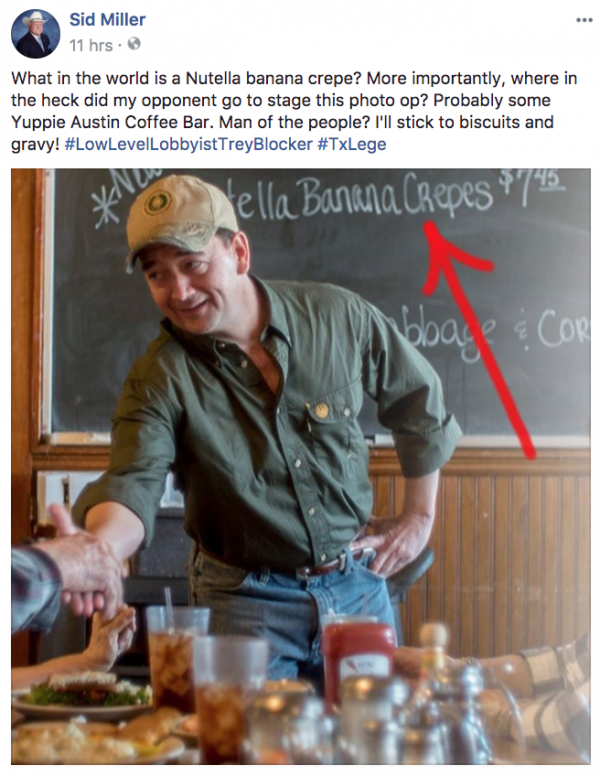 Since being elected to Ag Commissioner, Miller found himself in hot water numerous times, was investigated by several entities, raised taxes, and most notably, referred to Hillary Clinton as the c-word on his Twitter account. Ted Nugent is serving as his campaign chairman.

They don’t serve no biscuits and gravy, but they DO serve the best street corn in the world, along with other super-good stuff.

That doesn’t look like the inside of Torchy’s to me. Love their Trailer Park taco, and I think they make the best queso in town… love the hatch chilis. Next time you’re in town check out a new joint called Eldorado which was opened by one of the chefs over at Tacodeli. They have the best migas plate in Austin.

You misunderstood. Austin food is GREAT Texas food, and it can range allllllll over “eclectic”.

There are an amazing variety of great eateries in Austin, despite the idiot regulations there. I can’t remember the place that serves the Ron Burgundy burger, but it is awesome.

And, thanks for the recommendation. I’ll try to remember the name, and agree as to the queso. Amazingly good stuff…!!!

Opened a Torchy’s in my town not too long ago – those are some damn good tacos there!

and my wife and her sister are wild about Nutella, have been for a long time. Yeah, they love to make nacho’s with Ro-Tel, too.

The last time I was in Austin, I was on my way to Lockhart for real food.

You got that right, the food is one of the things (along with the music and the greenbelts, lakes and creeks) that makes it worthwhile fighting the hippies all the time.

And yeah, the Ron Burgundy from Gourdoughs… what’s not to like about a place that makes their hamburger buns out of donuts? With bacon, of course.

“street corn” is actually “elote”, and you gringos stealing the idea and re-naming is is a racist cultural appropriation.

have you no shame?

all the posts on that topic should be deleted.

Torchy’s is great. So happy they’re in Houston now. And yes, Austin has some fantastic eats.

Sorry, but Torchy’s is the Oscar Meyer of tacos. They have a very clever marketing scheme and the selections are funny/interesting/tasty. But I’ve never had anything resembling a taco from Torchy’s.

It’s for the children

Silly me – here I thought the big “C” word was
CLINTON!

snopercod in reply to notamemberofanyorganizedpolicital. | December 1, 2017 at 2:13 pm

Is Nutella banana crepe in the Pajama Boy Cookbook?

Both sound rather effete to me. (But what would you expect of a Yankee?) I can tell where this is headed, and I don’t want to be around to see it. The end game is, obviously, a cow pie-eating contest.

Not being a Texas voter, it’s all the same to me, but pardon me if I’m a bit skeptical of any notion that in that direction lies good government.

He is running for the position of TEXAS AGRICULTURAL COMMISSIONER.

Texas agriculture involves a lot of things, but Nuttella and bananas ain’t one of them.

Since crepes are made from eggs, it could be argued that they are related to Texas agriculture, but I’m pretty sure those are grown in either France or California.

Texas layers spit on the milk of the radiators of the chickens of Fraaaaaance.

Crepes are just pancakes/hotcakes/flapjacks without baking powder to make them rise.