Apparently he had NO idea that we paid this settlement. 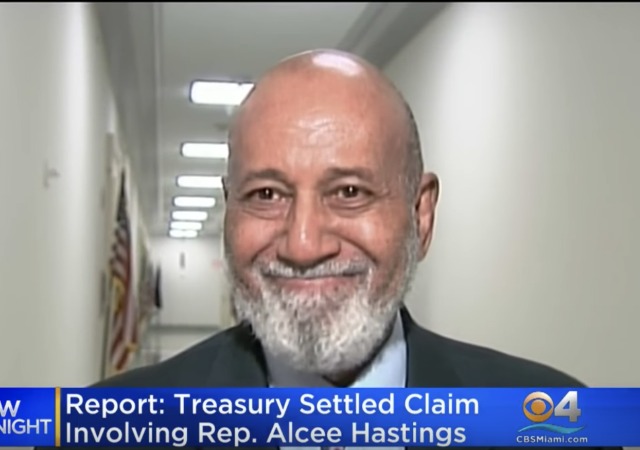 Roll Call has unveiled another instance of taxpayers paying for a lawmaker to hide his disgusting behavior. This time, us taxpayers forked over $220,000 so Rep. Alcee Hastings (D-FL) could settle a sexual harassment lawsuit:

Winsome Packer, a former staff member of a congressional commission that promotes international human rights, said in documents that the congressman touched her, made unwanted sexual advances, and threatened her job. At the time, Hastings was the chairman of the Commission on Security and Cooperation in Europe, where Packer worked.

Hastings has called Packer’s charges “ludicrous” and in documents said he never sexually harassed her.

“Until this evening, I had not seen the settlement agreement between the Commission on Security and Cooperation in Europe (CSCE) and Ms. Packer,” the congressman said in a statement Friday night. “This matter was handled solely by the Senate Chief Counsel for Employment. At no time was I consulted, nor did I know until after the fact that such a settlement was made.”

Hastings also expressed outrage that taxpayers paid that money to Packer. He claimed that the lawsuit and an Ethics Committee investigation were dismissed.

At the time, Hastings insisted on his innocence. From Politico:

“I have never sexually harassed anyone. In fact, I am insulted that these ludicrous allegations are being made against me. When all the facts are known in this case, the prevailing sentiment will be, ‘How bizarre!’” Hastings said in a Monday afternoon statement. “I will win this lawsuit. That is a certainty. In a race with a lie, the truth always wins. And when the truth comes to light and the personal agendas of my accusers are exposed, I will be vindicated.”

“Although Ms. Packer repeatedly rejected Mr. Hastings’ sexual attention and repeatedly complained about the harassment to the Commission Staff Director, Fred Turner, Mr. Hastings refused to stop sexually harassing her. Rather, Mr. Hastings and Mr. Turner began to retaliate against Ms. Packer—including making threats of termination—because she continued to object to Mr. Hastings’ conduct,” the Judicial Watch lawsuit filed with the U.S. District Court for the District of Columbia reads.

Hastings has a history filled with controversy. He served as a district court judge in in Florida before he became a congressman. The Florida Senate removed him in 1989 “by convicting him of eight impeachment articles, including one charging that he had conspired to obtain a $150,000 bribe.”

Many of those charges stemmed from a 1982 criminal trial connected to the bribe. The charges accused Hastings “of making false statements and producing false documents.”

Hastings was the sixth federal judge in history “to be removed from office by the upper chamber.”

In 1981, Hastings was charged with accepting a $150,000 bribe in exchange for a lenient sentence and a return of seized assets for 21 counts of racketeering by Frank and Thomas Romano, and of perjury in his testimony about the case. In 1983, he was acquitted by a jury after his alleged co-conspirator, William Borders, refused to testify in court, resulting in a jail sentence for Borders.[4]
In 1988, the Democratic-controlled U.S. House of Representatives took up the case, and Hastings was impeached for bribery and perjury by a vote of 413–3. He was then convicted in 1989 by the United States Senate, becoming the sixth federal judge in the history of the United States to be removed from office by the Senate. The Senate, in two hours of roll calls, voted on 11 of the 17 articles of impeachment. It convicted Hastings of eight of the 11 articles. The vote on the first article was 69 for and 26 opposed.[1]

The Framers did not include in the text of the constitution a proscription against felons serving in Congress or being elected POTUS. They assumed that the people voting would always be smarter than a rabbit and that being a felon would be a de-facto prohibition on service in Congress. They could not have foreseen that with expanded suffrage that they would be proven so wrong.

over the past 200+ years we came from needing to have property
to non citizens and felons having the right to vote (without showing ID’s).
as POTUS would say ‘sad’ state of (DummyCrp) affairs.

the only ‘franchise’ requirement (and in some locals not enforced) is breathing.

In Chi town, Phily and other (D) jurisdictions the graveyard vote is always there to help out – doncha know.

When are we going to see the names & number of times of these accused sexual harassers? We want to know and the Congress works for us (we think).

This Dem Congressman is a former Federal Judge who was removed by the U.S. Senate for perjury and obstruction of justice. So DNC tell us again about the moral standards that you say some GOP members have failed to meet.

Looking at the picture I said, “wait a minute, I thought Hastings was black, here he looks 100% white.” Indeed, black ancestry is central to his biography and other pictures show him appearing to have substantial black ancestry, at least 25% it would appear. Did CBS play with the coloring of its picture to make Hastings appear white when tainted by scandal? Our FakeNews media does seem to do this kind of thing almost systematically.

I want the money back. He can pay for his own perversions.

I agree, but all we hear is that this is just a drop of a drop in the ginormous deficit, so it doesn’t actually matter.

Funny how we might save billions cutting crazy crap like this and other known wasteful spending if only we could see the big picture. Instead, it’s “oh, THAT $500k doesn’t even make a dent in the deficit,” “That other long list of millions spent on ridiculous studies like ‘how many gay turtles are there?’,” and “200 billion? Are you kidding? That’s POCKET CHANGE!”.

One of the most discouraging moments in my political life was discovering that people who claim to be conservatives and libertarians shrug off stuff like this. If this misuse of our tax dollars means nothing, what matters?

Years ago one of my state’s last republican governors was on the radio and he causally mentioned of course they could balance the budget.

The host challenged him and the ex governor said eliminate all the conferences and unnecessary committees. It not only would have balanced the budget it would have created a surplus. But the show host couldn’t imagine giving up those sweet, sweet chances to schmooze. I kind of guessed there might have been a bit of a uni party then almost thirty years ago.

Innocent until proven guilty (“due process”). But, yeah, the settlement is damning evidence. Still, no lynchings. Americans are not Pro-Choice on principle. We do not deem lives unworthy, inconvenient, or [politically] profitable, and sentence them to a summary abortion of career, life, etc.

Anytime a settlement such as this is made, is if there is clear and compelling evidence that the claim is valid. Otherwise it is a misappropriation of public funds. Now, while it is possible that some mid-level bureaucrat is willing to lose his job and go to jail for dispensing funds without such a level of evidence, it is not real likely. And, being a bureaucracy, detailed records of such transactions are always kept. Bureaucrats do not care how much money they dispense, as long as they can show it was dispensed properly. This is the reason why Congress Critters are terrified of transparency with regard to these payments.

A majority of Congress had to approve of the slush fund intended to pay settlements and also to keep it from the public. Congress needs to be purged. Drain the swamp!