Bill signing will take place at a later date. 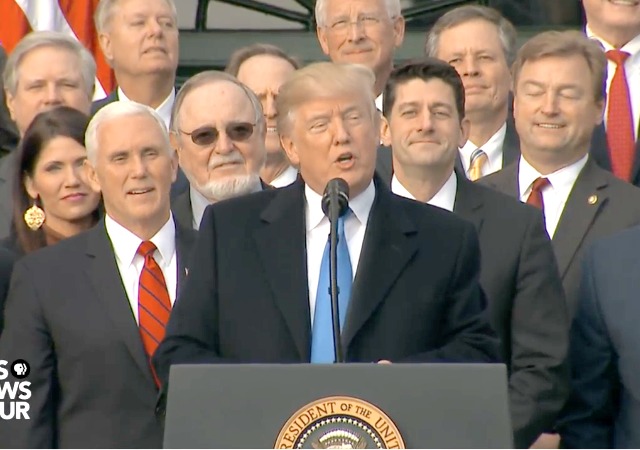 Congress passed the tax reform bill today, which will now head to President Donald Trump. We do not know for sure when Trump will sign the bill, but he is holding a press conference with members of the GOP at the White House to celebrate its passage through the two chambers.

Trump thanks Senate Majority Leader Mitch McConnell and Speaker of House Paul Ryan for their hard work along with a few others who helped it move along. A big thank you went to Alaska Senator Lisa Murkowski because the bill contains language to open ANWR to drilling.

Trump still says that repealing the Obamacare individual mandate basically repeals Obamacare. It cuts off a large chunk of the funding, but Obamacare still exists unfortunately.

Not Signing the Bill?

As I noted in my previous post, Trump may wait until the new year to sign the bill. Bloomberg explained:

Under the so-called PAYGO law, automatic cuts to Medicare and other spending categories would be triggered by the tax bill in January because the bill is scored as increasing the deficit by $1.5 trillion over ten years. Waiting until January means that those cuts would be delayed until 2019, according to budget expert Ed Lorenzen of the Committee for a Responsible Federal Budget.

Majority Leader Mitch McConnell and Speaker Paul Ryan have vowed that the cuts would not be triggered. They will need Democrats to waive them this year, however, since doing so would require 60 votes in the Senate. Nearly the entire House Democratic caucus last week threatened to block a PAYGO waiver unless Republicans made concessions like restoring the Obamacare individual mandate.

At his cabinet meeting, Trump praised the bill and the congressional GOP members who voted for it. From The Wall Street Journal:

“We got it done,” he said, thanking Senate Majority Leader Mitch McConnell (R., Ky.) and House Speaker Paul Ryan (R., Wis.) by name. “We have a tremendous amount of talent” in each chamber, he said.

Mr. Trump also addressed other provisions of the tax bill: “When the individual mandate is being repealed that means Obamacare is being repealed.. we have essentially repealed Obamacare and we will come up with something much better,” he added, saying block grants might be one approach.

Vice President Mike Pence was invited to give remarks and praised the president for regulatory rollbacks and the delivery of “historic tax cuts.. in just a short period of time, that promise will be fulfilled… you’re delivering on that middle class miracle… and you got Congress to do what they couldn’t do for seven years” in repealing the ACA’s individual mandate. Mr. Pence gave shoutouts on taxes for Steven Mnuchin, Gary Cohn and Ivanka Trump.

After the meeting, Trump said that housing secretary Ben Carson would say a prayer and welcomed the media to stay for it:

“You need the prayer more than I do, I think,” Trump said, adding: “A good solid prayer, and maybe they’ll be honest.”

The Democrats are stuck in a box now. They have to vote against everything.

notamemberofanyorganizedpolicital in reply to RobM. | December 20, 2017 at 8:14 pm

That “box” is called their coffin.

I wouldn’t prematurely ejaculate praises on the GOP in Congress. If the government shuts down in 2 days and this thing doesn’t kick in until 2019, it won’t go over very well.

If I read correctly, the tax cuts kick in on 1/1/18. AT&T has already announced per/employee bonuses and a $1 BILLION investment plan.

The lefties would OWN a government shutdown, since their no-votes would be predicated on their support for non-American criminals.

notamemberofanyorganizedpolicital in reply to bear. | December 20, 2017 at 8:16 pm

That’s what I understood from comments I heard on conservative tv shows today.

So I’m hoping those “standard deductions” almost double for this reportable tax year of 2017 that has returns going in by April 15, 2017.

Maybe Trump will sign it on Dec. 25th.
Would seem kind of appropriate.

“If you like your money, you can keep your money.”

Since the suicidal democrats are now on record as opposing tax cuts for Americans, why not force a Medicare cut and a government shutdown for good measure?

That would be too much winning for McConnell. He wants only enough to not get thrown out of office, and no more.

Breitbart is reporting that AT&T will be giving all union employees a $1,000 bonus as soon as the President signs this bill. Winning!

Sign it new years day. Nice way to bring the new year in.

It’s not so simple. Time will tell. Hopefully, this will not become the son of Obamacare.

Could you elaborate on how?

First and foremost, remember this: the rats of GOPe will stab us in the back at the first opportunity they can.

We are the ONLY people who would vote for a rino hack trying to hog a position in the GOP. Don’t.

Destroy the GOPe, and you’ll destroy the left. Don’t, and the GOPe will see to it the left destroys us.

One of the things I really don’t like about this tax plan is the 30% of income limit on deductible interest. It greatly advantages large firms over small, since small firms generally carry a lot more debt as a percentage of total capital than large firms and large firms generally have access to much cheaper equity capital than small firms (if the small firm can raise equity at all, private placements are a minefield and are in many cases useless given the restrictions).

Trump +1 in the results column.

Cant be done until you get more “real” conservative Senators in to the Senate. Get rid of McCain, McKaskill, and the other flakes and THEN you can worry about repealing Barry Care!

In the mean time, with the individual mandate gone Barry Care is all but dead!

Obamacare isn’t dead, the regulatory mandates that have massively increased the cost of insurance and shrunk care networks are still in place.

Insane of the Democrats to think that this is going to be a winner for them, the way Obamacare was for us.