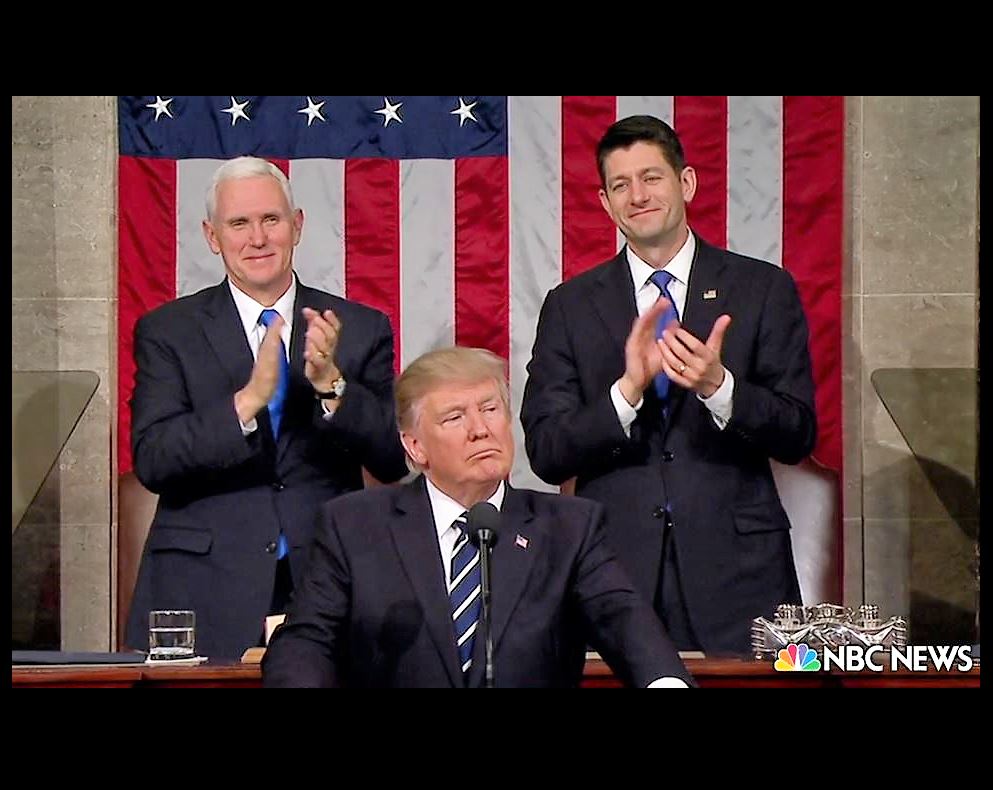 One of the earliest, and dumbest, mantras of #TheResistance since Trump won the election was that Trump’s continued business interests violated the Emoluments Clause of the Constitution.

No Title of Nobility shall be granted by the United States: And no Person holding any Office of Profit or Trust under them, shall, without the Consent of the Congress, accept of any present, Emolument, Office, or Title, of any kind whatever, from any King, Prince, or foreign State. [ARTICLE I, SECTION 9, CLAUSE 8]

It was at the heart of the efforts to delegitimize Trump supported by the leftist activist group CREW, which used to be run by David Brock. Brock’s replacement as Vice Chair, Richard Painter, is a Twitter star and frequent cable news anti-Trump hothead who plays off his former position as an ethics advisor to George W. Bush.

Law professor Larry Tribe and other anti-Trump law professors, gave a false patina of credence to the claims.

Yet there never was anything of substance to the Emolument Clause claim, and the Court just threw it out. A full copy of the Order (pdf.) is embedded at the bottom of this post.

A federal judge on Thursday dismissed a lawsuit brought by one of the organizations claiming that President Trump’s continued ownership of his businesses create conflicts of interest that violate the Constitution.

The judge, US District Judge George B. Daniels, also ruled that it is up to Congress to decide whether there are any valid concerns raised by foreign governments doing business with Trump’s businesses and, if so, what to do about those concerns….

Daniels ruled that CREW lacked standing because it could not point to an injury it suffered due to the alleged constitutional violation and that the hospitality industry-related plaintiffs could not show that their claim of “competitor standing” could be redressed by the court — or even that the emoluments clauses were intended to protect competitors.

“CREW’s entire reason for being is to investigate and combat corruption and reduce the influence of money in politics through, among other things, education, advocacy, and litigation,” Daniels wrote. “CREW is thus not wasting resources by educating the public and issuing statements concerning the effects of Defendant’s alleged constitutional violations or even by filing suit; this is exactly how an organization like CREW spends its resources in the ordinary course.”

Discussing the the hospitality industry plaintiffs, he wrote, “Nothing in the text or the history of the Emoluments Clauses suggests that the Framers intended these provisions to protect anyone from competition.”

As to the Foreign Emoluments claim specifically, Daniels wrote that it “is an issue committed exclusively to Congress.” To that end, he continued, “If Congress determines that an infringement has occurred, it is up to Congress to decide whether to challenge or acquiesce to Defendant’s conduct.”

Law Professor Josh Blackman tweeted some of the key findings:

2/ The court indirectly addressed the argument advanced by @SethBTillman and me. Rather than accepting Plaintiffs' position that Foreign Emoluments Clause applies to *all* federal officials, Judge Daniels said it applies to "certain" officials. pic.twitter.com/vrqaCAmb2p

5/ Crux of competitor standing analysis: "It is wholly speculative whether the Hospitality Plaintiffs' loss of business is fairly traceable to Defendant's 'incentives' or instead results from government officials' independent desire to patronize Defendant's businesses" pic.twitter.com/LYqX493omf

8/ Court finds"@CREWcrew fails to allege either that D's actions have impeded its ability to perform a particular mission-related activity or that it was forced to expend resources to counteract and remedy the adverse consequences or harmful effects of Defendant's conduct" pic.twitter.com/B2SRCv0cMm

12/ Court finds that FEC is "a textually demonstrable constitutional
commitment of the issue to a coordinate political department" and thus "Congress is the appropriate body to determine whether, and to what extent, Defendant's conduct unlawfully infringes on that power" pic.twitter.com/SPRxcHXpC6

Seth Barrett Tillman notes the court never decided whether the Emoluments Clause applies to the President:

CREW v Trump slip op. at 2 n.1: "Because Plaintiffs' claims are dismissed under Rule 12(b)(l), this Court does not reach the issue of whether Plaintiffs' allegations state a cause of action under either the Domestic or Foreign Emoluments Clauses, pursuant to Rule 12(b)(6)." /1

"Nor does this Court address whether the payments at issue would constitute an emolument prohibited by either Clause." /2

Oh, yeah. The rule of law is SOOOOOOOOOooooooo dead…

The mythical pendulum seems to be swinging, in favor of T-rump.

As a #NeverTrumper, please explain 1) such malleable political application of justice, and 2) pseudocredibility of the original charge given by the TDS media.

It has nothing to do with anything I’ve ever said.

You should limit yourself to reality.

Yoda to Luke, “No, young one, rags is not your father. However, the butt-hurt is SOOOOOooooo strong in him when President Trump wins.”

No, you poor moron. You got my comment backwards and inside out.

I’m the guy here to mocks the various doomsayers who declare the rule of law is dead in the U.S.

It isn’t, of course, and rulings like this prove it.

Additionally, I don’t consider T-rump “won”, as I never felt he was in peril on this issue. The law won, though, and that’s very good!

‘Emoluments Clause’ smelled like desperation from the get-go. The same for the 25th amendment lunacy. Of course, a lifetime ago, there were the birthers and their wack-a-doodlery. I guess all parties have a crazy aunt in the attic faction.

From the Washington Times: “The Supreme Court said Wednesday that the Trump administration doesn’t have to turn over a massive load of documents relating to the decision to phase out the Obama-era DACA deportation amnesty, and delivered another spanking to a California court that’s repeatedly ruled against President Trump.”

Is all this winning creating a ‘teflon’ president?

Well, not according to his popularity numbers…

The whole emoluments thingy was a non-starter from the beginning.

Ah yes, the same popularity numbers that, prior to the election, said that Hillary had a 93% chance of winning.

Why, no, Tom, the numbers to which I refer are quite different, and from many sources.

For instance, a FOX measure shows Donald Duck’s favorables with FOX viewers to be in sharp decline over a several month period.

Raghead is a “moby,” a troll variant. Don’t feed the trolls.

“The whole emoluments thingy was a non-starter from the beginning.

And there’s the real rub, right? You don’t have a valid misdeed or misstep to point to, so you stumble back to “I hate him.” Well, yeah, we know that. So what?

There’s nothing wrong with disliking Trump, lots of us do on varying levels (I find him personally loathsome, boorish, ill-mannered, and slimy), but your blind, knee-jerk venom is off-putting. No matter how loathsome I find Trump personally, I do like his campaign promises, and I do think he’s done a great deal to move in the direction of fulfilling them. He’s not a boogeyman, and he’s ten thousand miles better than Hillary would have been (that was our only other option).

If Trump’s “pathological personality” is your problem, then outline the reason you feel that way and how you feel it has demonstrably harmed (or even might hypothetically harm) our country. If you just want to spout hate because you see the word “Trump,” you’re a sad Pavlovian subject reacting to bells and whistles, not thoughts and principles. Salivating to the sound of a bell is something even a dog can manage with relatively little training.

I find Trump to be amazingly Reaganesque if you do two things: (1) read what he says, verbatim, rather than watch him say it or video of him saying it, and (2) watch the results of the things he does.

The polls are BS. Remember the polls during the primary and the election? Propaganda!

With media coverage of Trump running 90% negative, even if accurate it’s surprising that his poll numbers are as high as they are. The MSM must believe that its continuing propaganda campaign against everything Trump is failing. They probably expected much worse numbers for Trump considering the effort they’ve put into poisoning the well.

That’s odd, CREW skipped right over Clinton’s Uranium One scandal, a no brainer, and went to a drug induced conspiracy theory about Trump? Hmmmmm…

The left forgot all about the trick of invoking the 34th Amendment.

All points I raised when they first brought this nonsense up — including Tillerson’s argument that the presidency is not an “office under the United States” and therefore the foreign gifts & emoluments cause doesn’t apply. (No “great minds think alike” stuff; I read Tillerson’s paper in 2008 and was convinced by it.)

…and this from US District Judge George B. Daniels, a BJ Clinton appointee…

The fact that he’s a Clinton appointee is the reason for his ruling. NO ONE in this country’s history did a more thorough job of violating the Emoluments Clause than Hildebeeste and Bill; this ruling makes sure no one outside the Deep State bureaucrats who love them will have any standing to bring them to trial.

Ahhh, so close … all they needed was an emanation of a penumbra, and they could have kept this silliness alive …

Always interesting when some lying SOS suggests I’m a narcissist.

I’m the NOT-narcissist, and you can tell by the fact that a real narcissist like T-rump craves approval. They’ll tell any lie, and adopt any guise to get it. They have very insecure, delicate egos that they hide behind a veneer of super-confidence.

No narcissist would expose themselves to the jibes of morons by stating simple truths, or asking hard questions. They’d stroke the morons and adopt the popular GroupThink.

Trump’s success is just painful for you. Just call him some more names and make it all better

Mar 28, 2017 – Norm Eisen, former chief ethics counsel for Barack Obama, told The Independent that he is suing President Trump for allegedly violating the so-called “domestic emoluments clause” … Eisen isn’t mentioned in the article but is in the video. He was SO certain he was right and, with all the “standing” issues that prevented lawsuits against Obama, I find this “standing” judgement quite delicious, especially given how much Eisen just grates on me.

[Federal Judge] Daniels ruled that CREW lacked standing because it could not point to an injury it suffered due to the alleged constitutional violation and that the hospitality industry-related plaintiffs could not show that their claim of “competitor standing” could be redressed by the court — or even that the emoluments clauses were intended to protect competitors.