Press “Humiliated” Because Sarah Sanders Asked What They Are Thankful For

Press “Humiliated” Because Sarah Sanders Asked What They Are Thankful For

No, she did not require they say what they are thankful for 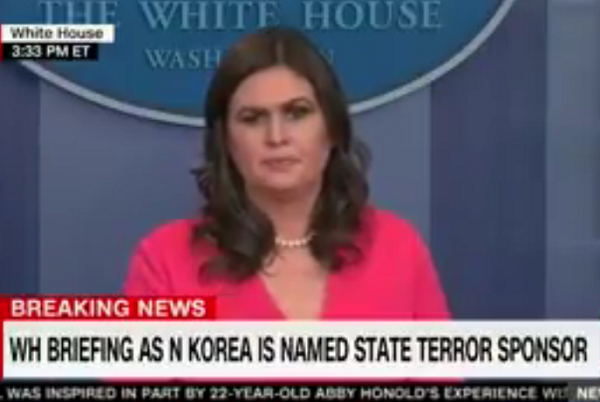 Earlier this week, White House press secretary asked reporters what they were thankful for and has since been castigated for “humiliating” and “degrading” the press.

White House press secretary Sarah Sanders encouraged reporters to first state things they were thankful for before asking their questions. Most of them obliged. They shouldn’t have.
Reporters ask questions at press briefings. Spokespeople answer them.

It’s neither the time nor the place for kibbitzing or moralizing, and it’s certainly not appropriate for a press secretary to lay down special rules for who gets to ask questions or how those questions need to be prefaced or proffered.

To be clear, Sanders did not insist reporters cooperate with her new “tell-me-what-you’re-thankful-for-first” rule. But she certainly set the expectation.

“This is how it’s going to work today,” she said. “If you want to ask a question I think it’s only fair since I’ve shared what I’m thankful for … you start off with what you’re thankful for.”

It seemed like a fun briefing, and everyone was quite friendly and open, even laughing convivially. Maybe that’s what has the media running scared?  Any sign that the White House press corps, even during a holiday week, is thawing toward the White House must be met with derision lest partisan divides start bridging.

Even I have to admit it was nice to see hard-bitten reporters express thanks to their families, to the troops and to our democratic ideals. And one had to feel just a little warmer inside when American Urban Radio Networks correspondent and CNN contributor April Ryan told Sanders she was thankful “to be able to talk to you and question you every single day.”

In an unmistakable jab at the administration, Cecilia Vega of ABC News said she was thankful for the First Amendment.

Were that we all. And I guess that’s the point.

Sanders goaded reporters into participating in what she couched as an aw-shucks, good-natured, can’t-we-all-just-get-along holiday kumbaya, but the real effect of the exercise was to underscore the disdain this White House harbors for the press. And the press shouldn’t have taken that bait.

The whole cringe-worthy exercise made me embarrassed for the reporters and angry at Sanders and this White House for their arrogance and condescension.

The exercise had established that the White House press pool consists primarily of straight, pious white men. The press secretary had enlisted the reporters’ help in mocking the purpose of the briefing; no information was conveyed from the White House to the public. She had shown who was boss: she could hold journalists to an arbitrary rule by making them offer thanks before asking a question, which diminished the journalists’ ability to hold her to the task of answering their questions. She reaffirmed that both the President and she herself lie easily and blatantly—as he did when he issued a “rhetorical response” on the U.C.L.A. students, and as she did at the beginning of the briefing, when she claimed to be thankful for the reporters in the room.

By making them laugh when she said that, and when she mocked April Ryan, and when she called the forced ritual a “fun exercise,” she gave them a role in debasing their profession and the job of reporting on the White House. This is how it happens: the matter was trivial, the whole spectacle lasted all of sixteen minutes, and we were all the worse for it.

What would we do without CNN?

(I mistakenly hit the down vote button instead of the reply button. Such is life at 3AM with no coffee. Sorry)

The press humiliate themselves more than all others possibly could.

Yep, they are outing themselves as a bunch of butt-hurt little lovies with the depth of an oil slick.

I take it they are not thankful for Trump. LOL

Best. Election. [Etc, you fill in the rest.]

More Fake News from CNN entertainment. I watched the news conference live and each of the reporters responded with the various things they were grateful, including the announcement of a few soon to be expected children among the White House press corps. Everything was natural, unrehearsed and in the spirit of Thanksgiving so common throughout the USA. A very relaxed press conference. Great way to start the Thanksgiving holiday celebrations.

CNN is totally incapable of honestly reporting anything. Why are they not banned by the Fake News Censors of social media?

“…but the real effect of the exercise was to underscore the disdain the press has for this White House.”

Fixed it for ya, CNN.

Shut the daily ‘bitch’-grandstanding session down… Bunch of wining snowflakes

Acosta wants his own reality show like Honey Boo Boo.

There was one, perhaps mentioned in the links, that claimed this was a “threat to our democracy”.

Sarah sure knows how to make them show their true colors.

Sarah H Sanders has done a terrific job herding the stray Pussycats of the MSM, she learned from Soicesr not to lose her cool with humor and tact.

Given the corruption of most of the news media,the whole thing is a waste if time at best, and at worst,is enabling tha a-holes.

Dump these stupid ‘press’ conferences, or sit the democrat media hacks in the back.

What ‘press?’ You mean the democrat media?

We shouldnt referto them otherwise.

If the press expressed gratitude more often, they would be HAPPIER. Scary!!!

Never a day goes by that the lefties at CNN don’t find something to whine about.

Look, the bottom line is the likes of CNN, etc. are the democrat propaganda machines. Period.

Don’t EVER expect “news” out of them.

This back and forth discussion about their corruption and bias is akin to doing the same about Pravda during the time of the Soviet Union.

It’s an enormous waste of time, but worst, the attention and arguments legitimize the democrat propagandists.

Ignore them, disrespect them like the ignorant clowns they are, and they’ll die on the vine.