GOP Rep. Jeb Hensarling Plans to Retire at End of His Term

GOP Rep. Jeb Hensarling Plans to Retire at End of His Term

He’s the chairman of the House Financial Committee. 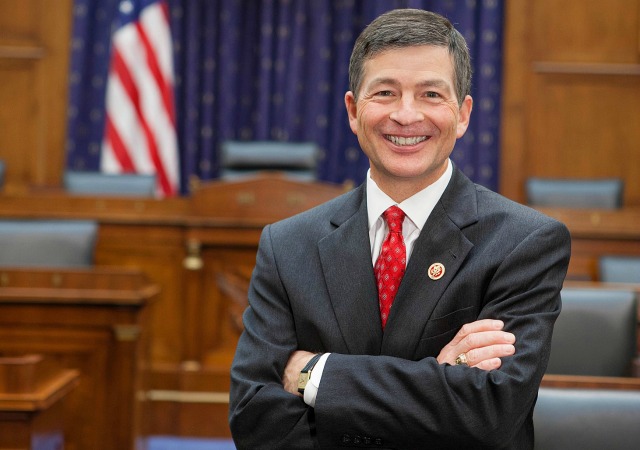 Rep. Jeb Hensarling (R-TX) has told The Dallas Morning News that he will retire at the end of his term:

“Today I am announcing that I will not seek reelection to the US Congress in 2018. Although service in Congress remains the greatest privilege of my life, I never intended to make it a lifetime commitment, and I have already stayed far longer than I had originally planned,” Hensarling wrote to supporters today.

Hensarling has represented Congressional District 5 in the Dallas area since 2003. He chairs the powerful Financial Services Committee and has been a strong voice in regulating the financial industry.

Hensarling wants to spend more time at home with his family:

“Throughout this time, my family has graciously sacrificed for my service. As the parents of two teenagers, Melissa and I know there are only a few years left before they leave and make their own way in life. I want to be there for those years. Since my term as Chairman of the House Financial Services Committee comes to an end next year, the time seems right for my departure.

He plans on using his last 14 months in Congress and on the committee to fight for limited government and the Constitution:

“Much work remains at the House Financial Services Committee in the areas of housing finance reform, regulatory relief, cyber security and capital formation to name just a few,” he said. “Furthermore, important work remains in the Congress as a whole – especially pro-growth tax reform. I look forward to continuing this work on behalf of the people of the 5th District of Texas and all Americans.”

Those close to Hensarling were not surprised by the announcement.

While on the committee, Hensarling has helped produce “dozens of bills to restrict or eliminate major portions of Dodd-Frank.” which led to “the foundation for Hensarling’s Financial CHOICE Act.” From The Hill:

House Speaker Paul Ryan (R-Wis.) called the CHOICE Act “the crown jewel” of the GOP agenda, and included it in the party’s 2017 policy platform. The House passed the bill along party lines in June, but GOP senators have shown little interest in a bill they consider too partisan to pass the upper chamber.

Hensarling has also advanced a slew of other fixes to Dodd-Frank through the committee, several with major bipartisan support, earning high marks from the financial services industry.

“He has had – and continues to have – a tremendous impact on the financial sector,” said a financial services industry lobbyist of Hensarling, calling him “the leader in Republicans efforts to reduce financial regulation under President Trump.”

The district is heavily Republican, which means it will probably stay Republican in the upcoming general election. But it looks like the heavy fighting will occur during the GOP primary.

This is going to be one hell of a mid-term election season.

Priming for a run as Texas Gov? Seems good so far.

Wow his internal numbers must be catastrophic for him to pull out the old ‘spend more time with his family’ line.

elected office wasn’t meant to be a lifetime sinecure…

and, even though it seems otherwise, not everyone there is a fing crook.

Nobody could tell by your comments (i.e., Romney lives 2/3 of the way across the country from Utah, and would be a carpetbagger).

last time i looked, he lived on the east coast. Governor of MA, and all that.

unlike you, i have a life, so i didn’t get the memo he had re-located. should we go back in the record and list all the times you’ve been wrong?

it would be good for a about a month worth of new article here, at least.

You should have the balls to at least admit you were STUPIDLY wrong on a matter you could easily have checked, and over which you were trying to smear someone.

Nope, he’d still have a lock on the job if he wanted it. Most of the district isn’t in Dallas (a bit of NE Dallas, part of “bedroom communities” Garland and Mesquite, Balch Springs, Seagoville and more rural/semi-rural points east and south.