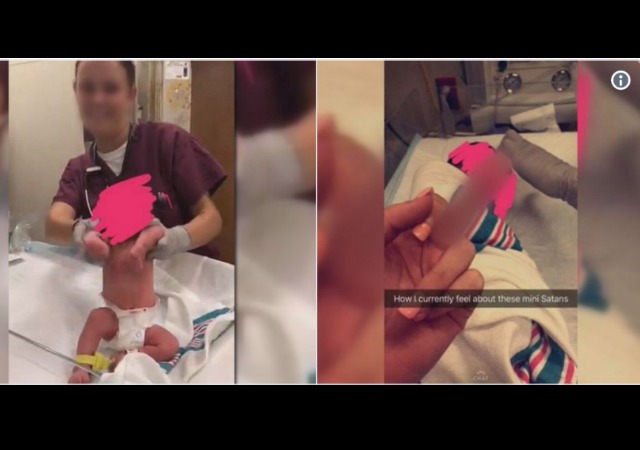 The Naval Hospital Jacksonville has removed the employees who mishandled infants and called them “mini Satans” in photos that went viral. From The Washington Post:

One video shows a female staffer in gloves and medical scrubs holding the infant by the armpit, moving the arms and body as music played in the background. One photo shows a staffer flipping a middle finger at the infant. Its caption reads: “How I currently feel about these mini Satans.”

It’s unclear from the images if the female employee in the video is the same person flipping her middle finger in the photo. ABC affiliate WFTS reported that the photo is an image from a Snapchat account belonging to one of the employees. The post also said that the “navy nurse” and her friend held up the baby and made it dance to rap music, according to WFTS.

Capt. Brenda Malone, spokeswoman for the U.S. Navy Bureau of Medicine and Surgery, which oversees several hospitals around the country, said the employees are corpsmen or medical officers for the Navy, not nurses. Malone said they are still assigned at the Jacksonville, Fla., hospital but are no longer providing direct patient care.

The hospital said in a statement that the infant’s parents have been notified of the incident.

As a 20+ year Nurse this is just disgusting. Both of these morons need to be subject to criminal charges and loss of licensure.

Sure patients get on your nerves, they can be abusive, irritating, and just plain mean, but these are infants, not teens or adults. Infants cry for a reason and these idiots should have been working to find out that reason and not getting their scrubs in a twist.

Though I do have to question the intelligence level of these morons not only taking pic’s of patients for no good reason and further posting them on social media to try to make people feel sorry for them.

They’re not licensed. They’re enlisted personnel of the Navy which they were assigned there as part of their service. They’ll eventually be drummed out of the Navy and get a bad conduct discharge on their record.

Hopefully, that will be the result. An Art.15 would be inappropriate.

Agreed,, these IDIOTS must be held accountable,,, arrest, prosecute and sentenced to prison. If that was my child that BITCH would be subject to my size 14 Boot !!

This is similar to the US soldiers who took pictures with dead suicide bombers in Afghanistan.

All people, living or dead, need to be treated with dignity. Especially if you are in a professional capacity

I don’t see the connection, but then I think killing the enemy is cool and injuring babies is not.

Nope, taking pictures of worthless pot bellied savages who have gotten exactly what they deserve, is no where near the same as as abusing newborns.