Cincinnati Bengals Player Stands for Anthem: “I Love My Country”

Cincinnati Bengals Player Stands for Anthem: “I Love My Country”

“I stand because my cousin is a pilot in the United States Air Force, risking his life flying F-15s in active war zones.” 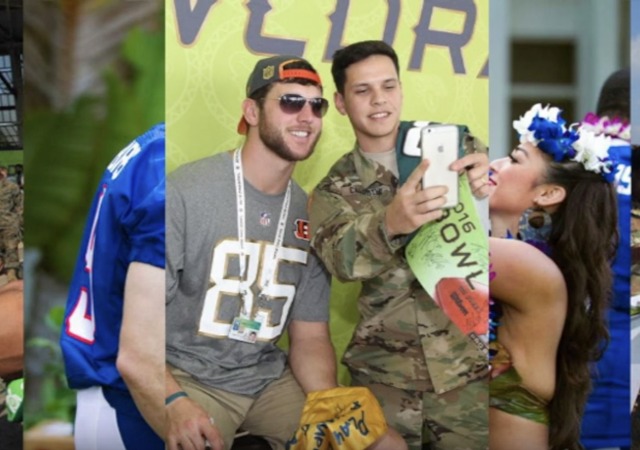 Eifert wrote at Medium that his passion for standing for the national anthem and when someone feels passionate about something, “it gets to the point where you want both sides to be heard.” He is correct. The only ones who receive the attention are those football players who kneel or sit, not those who stands.

Kaepernick decided to kneel for the anthem due to racial inequality, but Eifert points out that “has gotten lost in the media” and now all the hot takes are simply about whether one should stand or kneel. He continued:

I stand because I love my country.

I stand because I want to honor the people putting their lives on the line for me on a daily basis in the Army, Navy, Marine Corps, Air Force, and Coast Guard.

I stand because my cousin is a pilot in the United States Air Force, risking his life flying F-15s in active war zones. He takes pride in his job protecting Americans, a sacrifice that all members of every branch of the United States military willfully take.

Eifert mentioned Pat Tillman, the Arizona Cardinals player who gave up his multi-million contract to fight in Afghanistan after the September 11, 2001, attacks:

When you look at what is happening all over the world today, as a fellow professional football player, I am in awe of Pat Tillman’s courage. In 2002, he walked away from millions of dollars and a “dream” most people couldn’t imagine achieving to do one thing, fight for his country. Pat wasn’t fighting for himself, he wasn’t fighting for one group vs. another; he was fighting for Americans.

That day of tragedy, which we commemorate today, brought us together as a nation, but sometimes it seems that 16 years later we are divided. Eifert wrote that “[I]n this world of turmoil, I still believe in one thing strongly and that’s the flag and everything our country was built on.”

That includes everyone’s right to protest, which Eifert stresses he supports. He stated that he respected his “fellow players right to kneel during the national anthem.” But it’s a two way street:

I hope everyone now knows why I stand, and respects that as well.

Eifert is showing his admiration for those who have served in other ways as he explains in his article. During the Bengals’ first game Eifert wrote Pat Tillman’s name on his cleats. His cleats will always have “another person’s name from the United States military, whether active, retired, killed or missing in action, or a prisoner of war.” He wants to use this as a way to thank those who have sacrificed so much so he has the ability to play professional football.

He has also decided to support K9s For Warriors:

To make an impact and help with the people I respect, I am moving forward supporting the K9s For Warriors charity. Something that many people in our country overlook are the negative affects war has on the individuals putting their lives on the line for our freedom.

Posttraumatic stress disorder (PTSD) is a serious issue and something that sadly results in suicide from many military veterans when not treated correctly. Meeting and talking with the leaders from K9s For Warriors, they worry that doctors are masking the issues of PTSD by just giving these individuals pills to mask their traumatic experiences. One thing they are finding that helps more than anything is highly trained service dogs.

In supporting this charity, I want to raise awareness for the real issues affecting military veterans who suffer from PTSD while also raising money to train more dogs to improve the lives of military veterans.

USA Today reported that a large of members of the Cleveland Browns stood with law enforcement and military personnel during the national anthem at the game as a few players kneeled.

A show of unity: Members of the Cleveland Browns and law enforcement agents locked arms for the national anthem https://t.co/2noXIDLSXI

Players on the Houston Texans and Jacksonville Jaguars protested the anthem.

Looks like no national anthem protests by either the Texans or Jaguars today. Saw no kneeling, sitting or fists raised. pic.twitter.com/CaeXhmiMSw

I think you meant law enforcement not “lawn” enforcement, although I’m glad they do still protect private property rights, too…albeit those have sadly dwindled over the years through litigation as well.

“Lawn Enforcement”. That would be a good name for a lawn company.

a large of members?

Players on the Houston Texans and Jacksonville Jaguars protested the anthem.

followed immediately by a tweet saying the exact opposite?

“Lawn enforcement” is what HOAs are for.

Lawn enforcement by HOAs. You will find some real Nazis hiding in those groups. Surprised Antifa hasn’t showed up at their doorstep. Might improve their popularity too.

Guy stands for national anthem, says he loves his country.

It gets a headline (because it’s controversial).

We surely live in interesting times.

Are there no copy editors at Legal Insurrection?

None at any publication of any sort.