“This bill will ensure that veterans continue to have the ability to see the doctor of their choice,” 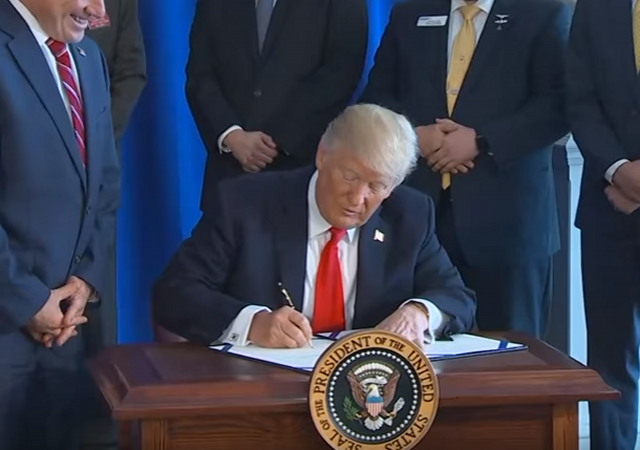 Improving healthcare for veterans was one of the central tenets of Trump’s presidential campaign. This weekend, he took another step towards that goal by singing a bill which will allow veterans to seek private care.

“This bill will ensure that veterans continue to have the ability to see the doctor of their choice,” Trump said during a press conference at the bill’s signing. “You’re going to have immediate medical care for our veterans.”

The legislation, which passed the House unanimously, provides funding for veterans who seek treatment from a private doctor in certain cases. It also allows the Veterans Affairs department to lease 28 new facilities around the country, in an attempt to expand access to government-provided care. That makes it a compromise in the larger debate between conservative and liberal proponents of VA reform.

“We’re grateful President Trump is taking decisive action to ensure veterans using the Choice Program won’t see lapses in their care due to a lack of funding,” Dan Caldwell, policy director for the conservative Concerned Veterans for America said of the bill signing. “Unfortunately, this bill took far too long to get to the president’s desk and is $1.8 billion more expensive than it needed to be.”

ABC News has more on how this all works:

The Choice program was put in place after a 2014 wait-time scandal that was discovered at the Phoenix VA hospital and spread throughout the country. Veterans waited weeks or months for appointments while phony records covered up the lengthy waits.

The program allows veterans to receive care from outside doctors if they must wait at least 30 days for an appointment or drive more than 40 miles to a VA facility. VA Secretary David Shulkin has warned that without legislative action, the Choice program would run out of money by mid-August, causing delays in health care for thousands of veterans.

The bill will extend the program for six months. Costs will be paid for by trimming pensions for some Medicaid-eligible veterans and collecting fees for housing loans…

Leaders of the House Veterans Affairs Committee said the six-month funding plan was urgently needed and would give Congress more time to debate broader issues over the VA’s future.

Better care for veterans is something about which all Americans should be happy. They deserve the best.

On a political note, this also gives Trump a significant bipartisan legislative accomplishment, something many people have been saying he needs heading into 2018.

Monopolies are the provenance of mortal gods, left-wing ideologues, and people who leave home to live on beachfront estates in Hawaii.

Have the perpetrators of the wait time fraud been brought to justice?

THAT’S unpossible. There are those here who soberly declare there is nothing we can do that would be bi-partisan.

Along with the rule of law is dead, and we’re in a civil war that is just about to start the shooting part, etc., etc., and some more nonsense etc.

I do not, like some, believe bi-partisanship is dead – I do believe it is wounded. Badly.

If left and right can get together on the few things they can agree about, without their fringe supporters going nuts, perhaps something can be accomplished that benefits the country as a whole.

I don’t hope out much hope for that, politicians being what they are, but I do hope.

(And don’t stick your head in the mud… There is good in the world!)

It should have been this way from the beginning, but this is a good start.