He also made Poltergeist and Salem’s Lot. 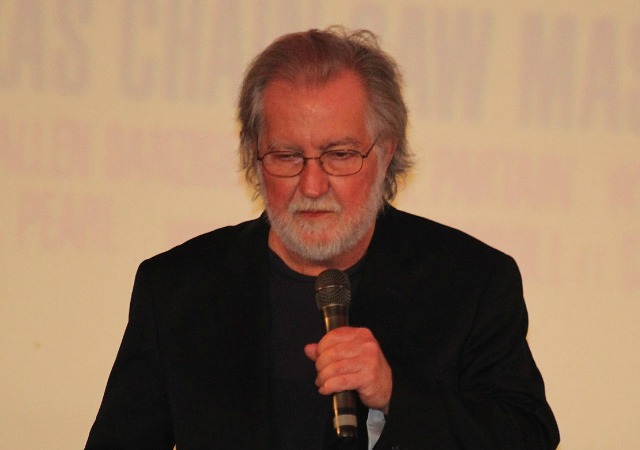 The horror movie genre has lost another great. First we lose George Romero. Now the Los Angeles County Coroner announced that Tobe Hooper is dead at the age of 74. They did not releases the cause of death.

Hooper shot to fame with Texas Chainsaw Massacre in 1974. He followed that up with the TV movie Salem’s Lot in 1979, based on the Stephen King novel, and Poltergeist in 1982.

Like Romero’s Night of the Living Dead, Hooper’s Texas Chainsaw Massacre is one of the most influential horror movies in history and a go-to for those who made slasher horror movies.

Hooper made the movie for $300,000 and it quickly became the highest-grossing independent film until John Carpenter released his iconic Halloween in 1978. This happened even though numerous countries banned it for violence. In 2014, Decider showed how influential this movie became:

With money pooled from director Tobe Hooper, writer Kim Henkel, and investors, TCSM was cast, filmed, edited, and marketed for under $300,000. This DIY, low-budget nature of horror was unheard of prior to the New Hollywood era of cinema, but it quickly became the hottest trend thanks to the success of the film, inspiring college kids with cameras at their disposal to say, “Hey, I can do that at home!” Currently, DIY horror has been divided into dozens of subgenres, filling midnight screening spots at festivals and creating Vine celebrities who like to tinker with stop-motion effects and try-this-at-home-gore.

But NOTHING scared people more than the weapons of choice in TCSM:

Prior to TCSM, audiences were used to seeing guns, knives, ghosts, goblins, aliens, and vampires as threats on the silver screen. Never had anyone dreamed of seeing your dad’s power tools being used to slice and dice innocent travelers. TCSM encouraged filmmakers to get creative with their violence, which was both a blessing and a curse to the horror genre and the suspension of disbelief. Anyone remember Ghost Ship and the tension rope? I remember thinking, “That’s fucking stupid. Whoever OKed that deserves to be smacked.” It’s worth arguing that the most creative slasher/gorefest to be inspired by TCSM in recent years is Saw. For example, I’ll never forget that bear trap scene for as long as I live.

I can’t tell you how many times I’ve seen this movie…it still scares the crap out of me. The movie didn’t use fantasy monsters, but used human monsters. Hooper based Leatherface off of serial killer Ed Gein, who would make costumes out of the skins of his victims.

Yes, the gore is disturbing, but hardly anyone speaks about the psychological terror it inflicts on the viewers. The fear also comes from the isolation…middle of nowhere, trapped. No form of communication. No one can hear you scream.

Look at the infamous dinner scene, which is one of the hardest scenes to watch in movie history. The family ties up Sally, the final girl, and seats her at the table. During the dinner party, the family torments her and mocks her screams. She knows they’re eating her dead friends. Then the family puts a hammer in the almost dead grandfather and encourages him to bash in Sally’s head.

Hooper directed the scene so well it’s hard to put into words:

Hooper made more news when he adapted Stephen King’s novel Salem Lot into a TV movie. Critics consider it one of the greatest TV movies ever and one of the best adaptations of a King novel. The cultural publication Time Out gushed over Hooper’s adaptation:

A surprisingly successful small screen adaptation of Stephen King’s vampire novel. In the Maine town of Jerusalem’s Lot, it slowly dawns on writer Soul that antique dealer Mason is a harbinger of blood-sucking evil. Edited down from the 190 minute, two-part TV movie, this cinema release version is slightly gorier and tighter than the original. Paring away the excessive plot exposition of Paul Monash’s teleplay, it places the emphasis on Hooper’s fluid camerawork, creepy atmospherics, and skilful [sic] handling of the gripping climax.

Salem’s Lot has made quite a few greatest of all time lists. Entertainment Weekly ranked Kurt Barlow as the #8 greatest vampire vampire. The window scene with child vampire Ralphie Glick received the #4 spot on Empire Magazine’s list for its top ten scariest movie scenes.

I’m 36 years old and Poltergeist was one of the movies that got me into horror movies. Yes, I cannot remember a time I didn’t like scary movies. This movie also contributed to my brother’s fear of clowns!

But not only is Poltergeist a classic and influence in horror, many put it as one of the best movies of 1982. Yes, the horror part is fantastic, but Hooper also incorporated the importance of family and kin. It also showcased the connection between a mother and her child, how we will do anything and risk our lives to save the children.

There’s a controversy around this movie, though. Some people believe Steven Spielberg, who produced the movie, actually directed more of it than Hooper. Some say it’s more on par with Spielberg’s movies than Hooper’s movies. However, those who have seen Poltergeist and Salem’s Lot can make the argument that Hooper helmed the camera and direction. The smooth camerawork….the intense and creepy atmosphere….I honestly side with those who say Hooper directed this movie.

Poltergeist remains on the lists of greatest horror movies ever, but also on lists for greatest movies ever, those that combine all genres.

Hooper also made Lifeforce and remade Invaders From Mars.

His later movies did not have as much of an impact. His last film was Djinn in 2013 and set in the UAE. He made two episodes of Masters of Horror.

Hooper ventured into music when he directed the stellar video for Billy Idol’s “Dancing With Myself.”

Romero’s death hit me hard, but Hooper’s is harder to swallow. Rest in peace, you horror genius. You may no longer be here physically, but you will remain forever with us. Thank you so much for everything you have given.

Why is this drivel worthy of a post on a legal oriented blog?

I just watched Leslie Eastman go several rounds with a Share Blue troll today over a movie, and you have to ask this question? Movies are part of our culture.

Not only are they part of our culture, the culture is fighting back.

People are not going to the Hollywood “Hillary Clinton” movies for a reason. That reason is probably Donald Trump. The boycott is working:

Report: Hollywood Is In No Shape To Bounce Back From Box Office Bust
http://www.dailywire.com/news/19348/report-hollywood-no-shape-bounce-back-box-office-john-nolte#

Perhaps because the products of these violence-porn creators have probably contributed to a lot of desensitization to violence among our young, and are responsible for horrific copycat crimes that have occurred:

TFR: May I suggest a link shortening service like Tiny URL?

Your long link may not work well for some to try and copy, so this: http://tinyurl.com/yba3amwn may work better.