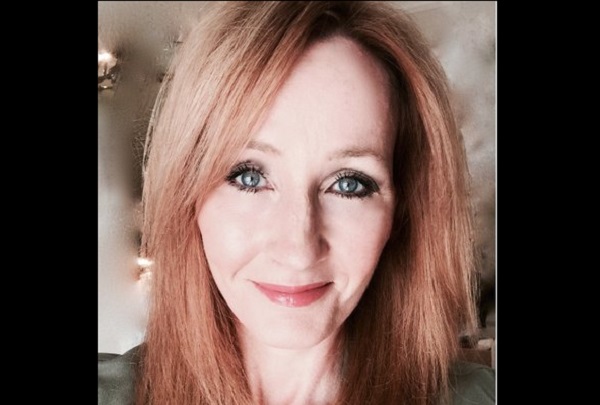 JK Rowling found herself in the midst of a Twitter storm after retweeting a partial video that misrepresented President Trump’s interaction with a boy in a wheelchair.   Rowling, however, didn’t stop at a mere retweet, she went on a six tweet tirade against the president.

She’s now apologized, not to the President whom she wrongfully accused, but to the boy to whom the president paid special attention and to the boy’s family.  She has also deleted the original, misguided tweets.

The whole thing started when an aide to Representative Pramila Jayapal (D-WA) tweeted the misleading video with a snarky comment about President Trump.  He subsequently deleted the tweet, but not before Rowling hopped on her anti-Trump soap box via Twitter.

Ansel Herz, the deputy communications director for Jayapal, tweeted out a video which appeared to show the president ignoring a youngster in a wheelchair reaching up to try and touch Trump’s hand or shake it.

Child in wheelchair reaches up twice to shake the president’s hand pic.twitter.com/v2cNVwX9Je

The clip came from a statement on health care Trump delivered on Monday, amid the Senate’s haggling over their repeal-and-replace bill for Obamacare.

“If you’re disgusted by this, follow my boss: @RepJayapal. People call her ‘the anti-Trump,'” Herz wrote in a follow-up tweet.

Deleted an earlier tweet because it turned out to be missing some context. Apologies.

Though Rowling’s tweets have now been deleted, we have them archived: 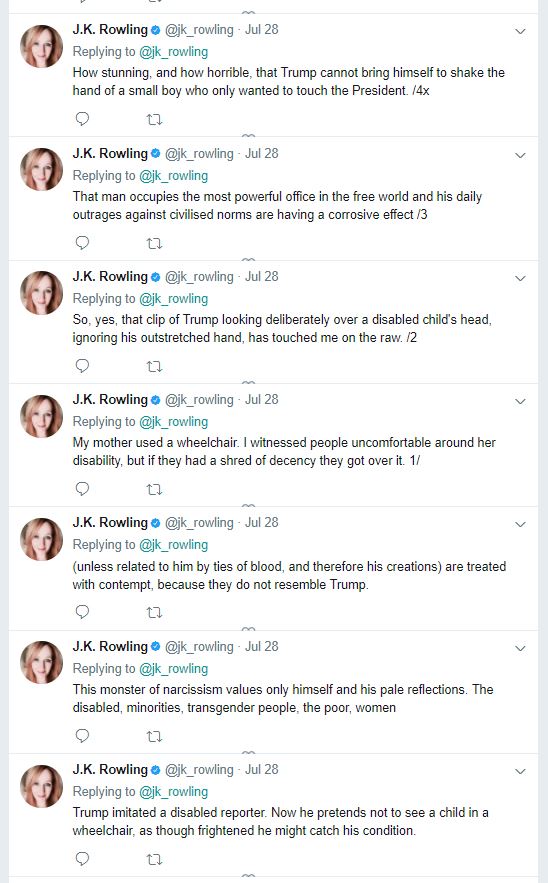 Rowling faced fierce backlash for this unhinged tirade, including from former CNN host Piers Morgan, who noted that Rowling left the misleading and false tweets up for three days:

For 3 days she has left this up, knowing it's a lie.
Quite extraordinary. https://t.co/toQFxfFiiw

The mother of the boy in question blasted Rowling.

A mother has lashed out at JK Rowling, saying that the Harry Potter author wrongly said Donald Trump ignored her disabled son during a recent meet-and-greet.

Rowling had criticised the President for what she described as a snub against the small boy. Marjorie Kelly Weer, the mother, said that the author’s interpretation of a clip showing their meeting was simply wrong.

“If someone can please get a message to JK Rowling: Trump didn’t snub my son & Monty wasn’t even trying to shake his hand,” Ms Kelly Were wrote in a post on Facebook.

The mother clarified the events further, saying that her three-year-old son isn’t all that keen on shaking hands anyway. She also said her son was excited about a secret service patch he had been given, and was more excited about showing that off.

Eventually, after letting her tweets stand for three days, Rowling finally responded to the intense criticism, deleted the tweets, and apologized to the boy and his family, but not to President Trump.

In their article, “Rowling apologizes to family of disabled boy but REFUSES to say sorry to Trump for falsely saying the President refused to shake his hand after outrage led by Piers Morgan,” the Daily Mail reports:

JK Rowling has apologized to the family of a disabled boy after she hit out at President Donald Trump on Twitter for falsely accusing him of refusing to shake the boy’s hand.

The author’s apology came after her tweets were called out by Piers Morgan, however she has still refused to apologize to Trump for her accusations.

‘Re: my tweets about the small boy in a wheelchair whose proferred hand the president appeared to ignore in press footage, multiple sources have informed me that that was not a full or accurate representation of their interaction,’ Rowling tweeted just after 2pm on Monday.

‘I very clearly projected my own sensitivities around the issue of disabled people being overlooked or ignored onto the images I saw and if that caused any distress to that boy or his family, I apologise unreservedly.

‘These tweets will remain, but I will delete the previous ones on the subject.’ 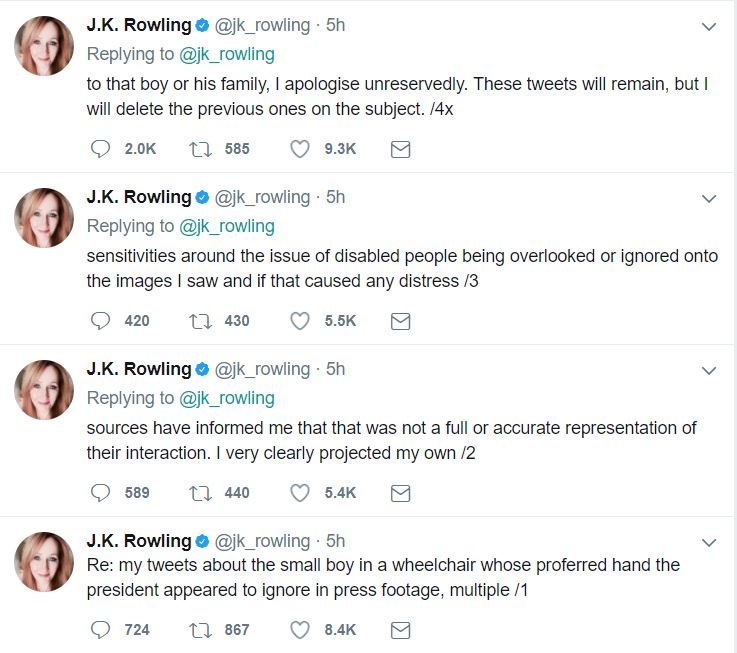 Her refusal to acknowledge that she besmirched President Trump unjustly is a boon for the president.  It reinforces the perception that the left is unrepentant in its unhinged, incredibly biased, and inaccurate casting of our duly-elected president as some sort of monster.

JK Rowling and the anti-Trump left: 0

JK would rather give up her Harry Potter money than apologize to PDT!

notamemberofanyorganizedpolicital in reply to HamiltonNJ. | August 1, 2017 at 1:13 pm

That’s fine by me. She can send it all back to MAGA!

It just goes to show….. “progressives,” leftists and Democrats are just the most racist, bigoted people around…..

Patrice Lewis | Racism, the single most powerful weapon in the left’s arsenal

JK Rowling is the real Voldemort!

I always wondered who was the inspiration of this Harry Potter character…now we know!

and –> if <– that caused any distress to that boy or his family, I apologise unreservedly.

that is NO apology, that is equivication

JK Rowling and the anti-Trump left: -999

Trump should sue. JK has deep pockets, her statements were malicious and false, and British libel law makes it much easier to win than in the US.

Her comments were not malicious. She believed them to be true.

Can the deliberate ignorance of the truth of her comments be any different than “I did not know my comments were false?”

She either spread a lie by having no interest in its falsity or she is stupid.

Malice has no connection with intent to cause harm. Malice, in the context of US defamation law for public figures, means that the defendant either knew that her statement was false, or showed reckless disregard for whether it was false or not. Mere failure to investigate due to an assumption that it was true is not malice.

The whole point of Sullivan is that one has no duty to investigate every allegation against a public figure before publishing it. One must merely have a good faith belief that it is likely to be true, which Rowling clearly had. She had grounds for her belief, because she’d seen the video clip after the speech; she had no duty to find and watch the whole thing before tweeting her reaction, though she’s just learned the hard way why that’s a good idea anyway.

Rowling’s failure (refusal) to apologize to Trump for spreading a comment that she certainly now knows is a lie confirms her intention to harm Trump (she wants the harm to remain). And, intention is all that matters per a former Director of the FBI!

BS. Intention to harm is not a factor in a defamation case, and nobody with knowledge of the law has ever claimed it was.

Let’s re-work this a-hole rowling’s tweets to reflect her reality:

How stunning, and how horrible that Rowling cannot bring herself to apologize to the President of the United States after rowling used a handicapped boy to create and spread the most vicious, vile lie about the boy and the President.

Rowling occupies a powerful position in children’s media and her daily outrages against civilized norms are having a corrosive effect.

So, yes, that clip of Trump looking over a disabled child’s head and ignoring his outstretched hand: like the sleazy ignoramus I am — I made it up!

My mother used a wheelchair. I witnessed people around her – and I lied about them, too!

This monster of narcissism values only herself and her pale reflections. (That’s me folks, looking in the mirror.)

Rowling imitated a real reporter. Now she pretends to not see how she exploited a disabled child in a wheelchair, and Rowling is now frightened the world sees her as the ignorant, arrogant dumbass she is.

Rowling wrote 1 good book. Then she re-wrote it 6 times to keep the royalties rolling in. She tried to write a more mature themed story under an assumed name, and it was a bomb. Hemingway she ain’t.

She ain’t anything anymore.

She stole one good book. The core premise of the Harry Potter novels is a direct ripoff of Jill Murphy’s The Worst Witch series. Most of the characters are a direct map.

Oh, rubbish. There’s no real similarity at all. If you want a real parallel, look no farther than the Dark Lord V.

Honestly, sometimes it’s as if people had never read any school stories, or even heard of the genre, before Potter. No Tom Brown’s Schooldays or Stalky & Co, no Billy Bunter or Molesworth, no Chrestomanci, no Naughtiest Girl, or a hundred others. They think Rowling invented the genre, and then when they find she didn’t they turn on her. Idiots.

Rowling demonstrates the characteristics of a good leftist:
a) Ignorant – facts have no standing
b) arrogant
c) hateful
d) dishonest
e) bigoted

Trump saw the boy as a person. Rowling saw him as disabled and therefore a useful political tool to be exploited.

There are two things that ALL liberals are incapable of.
1. Admitting a mistake.
2. Saying they are sorry.
Have you ever heard either from a liberal? This fictional fool is right up there with Dan Rather with his “Fake but true” story.

Oh, they say they’re ‘sorry’, no problem: that’s their pass to anything. Snowflake survival rule #1: you can do anything bad – simply apologize for it if you’re caught. Then do it again, but try harder now to get caught.

You are correct that leftists will never admit they are wrong: their egos could not stand the reality they are actually ignoramuses.

J.K. is is need of some remedial make-up lessons, it seems.(and, probably a lobotomy, also)

She already had the lobotomy.

“This monster of narcissism …”

Have you no mirrors?

The children she wrote about (for the most part)possessed more honesty and integrity than she does.