“very, very, weak-minded women, who are afraid of him” 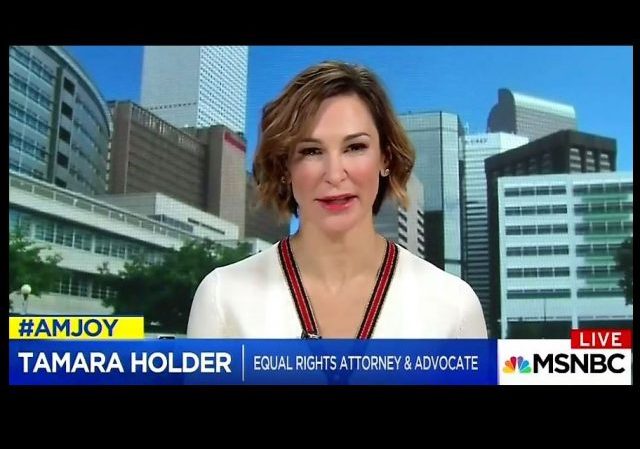 Holder was upset that they had failed to condemn the president over his tweets directed at Mika Brzezinski and Joe Scarborough.

“I think the women in Donald Trump’s life probably have smaller minds than his small hands . . . he has continued to surround himself, Donald Trump, with very, very, weak-minded women, who are afraid of him.”

The women who had been cited prior to Holder’s comments were Sarah Huckabee Sanders, Kellyanne Conway, and First Lady Melania Trump.

Wouldn’t you love to see Holder go toe-to-toe with any of them? 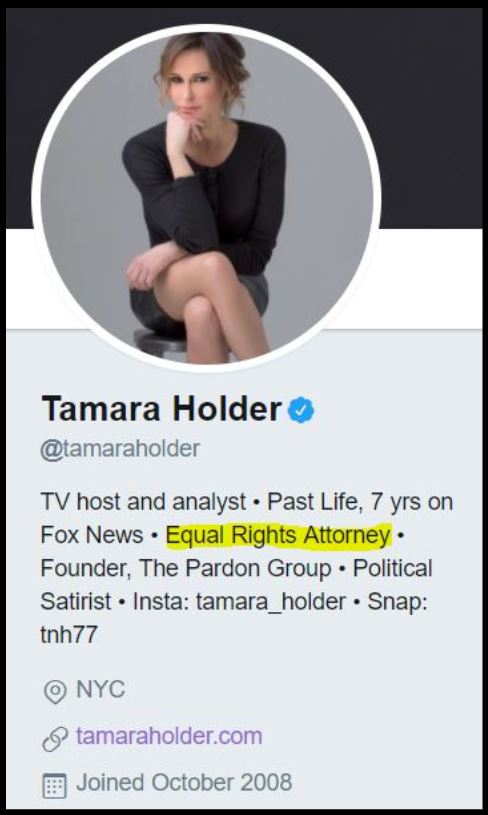 Good God, what is the matter with this woman? As I recall, Melania made her way to the top with a highly successful modelling career in the high-stress international fashion world. I also read she speaks several languages. And this nobody chick calls her small-minded? Can you say “meow”?

Your screen name is very apt for this one! 🙂

I guess it takes a “small-minded” and “weak-minded” woman to manage a successful presidential campaign.

Google “Tamara Holder and Gavin McInnes”. After that interview, she left Fox News, got married, and had a kid. For all of her irrationality, some part of her knew that McInnes was right and took action.

GREAT video! Thanks for the tip!

Let’s see Tamara go head-to-head with Kellyanne whose specialties are castration and disembowelment. We’ll see who cries first, the whiner or the slasher.

Sorry, but I cannot accept Tamara Holder as a arbiter of who is strong minded or weak minded, smart or not so smart, etc.

I’m not going to follow suit and call her names. But when I recall seeing her on panels on FNC where at least one other attorney was present, she was almost always incorrect in her position on the law. And very often her points were made in the most basic way without much backing. More like talking points and repeated SJW expressions.

She is no judge of mental strength.

I have’t seen any signs that Melania or his daughters or daughters-in-law are afraid of him, or that they are particularly weak-minded.

The comment to which Holder, et al., object, alleged that Mika showed signs of having had some kind of cosmetic surgery, which Trump called a “face lift.” Mika’s response is that it wasn’t a face lift! It was a chin tweak! Seriously?

Whatever it was, it didn’t work.

That sure looks like a turkey wattle under her chin. Or maybe it’s excessive scar tissue.

Now, now. Many men and women over 50 get that turkey neck. It’s my understanding it’s genetic. I don’t have one, but not because of any surgery, just luck. I also understand that many women and men who appear on TV do get cosmetic procedures done to extend their time of looking reasonably good on TV. So far, so good. What I thought was tremendously silly was the response that it wasn’t a face lift. If she didn’t want anyone to know about her cosmetic procedures, she shouldn’t have gone begging for admission to Mar-a-Lago with the scars (and bleeding!) still visible.

Hmmmm. I don’t doubt who is small minded here. And it is not Trump’s wife and employees.

How “large minded” is she who posts a photo of herself as an attorney in a thigh-high dress? Really?

Honest question here: when do smears and other comments like the ones regularly slung our way by leftists cross over the line into actual slander? What sort of evidence is needed to win a slander case in court?

They don’t, ever, not for public figures. But that’s not the point, what’s happened is that now MSNBC is exposed as nothing more than a gutter outlet that spews insults and talks trash and nothing more. Trump has aggravated them to this point, and now there is no way that anyone can reasonably call them a “news” organization.

And so why does this matter? Because now Trump will be justified in banning anyone associated with that network, and also anyone at their big brother NBC, from entering White House grounds for any reason, he can ban them from all briefings, and he can order all administration officials to refuse to appear or talk to anyone associated with either of those organizations.

They can watch Fox if they want to find out what’s going on. You may not think that’s what we are coming to – I saw absolutely that is where we are going next.

After reading Tamara’s take on things and a Holder being our brightest AG, I am worried about the Holder clan.

Another leftist commentator outs herself as completely controlled by rabid partisan hatred of the most basely emotional sort, making her completely unfit for the role of objective or at least reasonable information interpreter that she is getting paid for. By any professional standard she needs to recuse herself.

Trump has managed to goad them all into revealing the massive conflicts of interest between their personal agendas and hatreds and the informational role they are assuming vis a vis their customers. They won’t recuse themselves, but now that they are making their rabid bias so severed-head-drippingly clear even our low information voters will get it and do the recusing for them. Snd all it takes is an occasional tweet 1/100th as strong as they deserve. It’s looking more and more like genius.

An attorney whose publicity photo puts her legs first.

Now, why would I ever listen to anything someone like that had to say?

With that bad face lift job of hers, you might have done the same thing!

She’s part of The March of the Democrat Hysterics: people who will say anything and do anything for attention.

I have a PhD and two masters’ degrees and I support Trump.

This reminds me quite a bit of those people who tell me that I am an idiot and do not understand science in the least because I do not support global warming like they demand. They proceed to tell me that they are the real expert, how they really understand the science behind it, and how I am not only unqualified to have an opinion, but I am antiscience. What makes this so absurd is some of those people telling me this are incoming freshmen, fresh out of high school, and telling me this as they sit in my Introduction to Chemistry class where I am their professor. It would seem that a Ph.D. in Chemistry with 30+ years experience as a well published research chemist is nothing compared to that of a high school graduate.
>
What is utterly amazing is how these people have no grasp as to how foolish they sound whether it is them arrogantly talking about climate change or insulting the intelligence of those who they think voted for the “wrong” presidential candidate.

Ask your freshmen about the pause–the planet hasn’t demonstrably warmed since they were born.