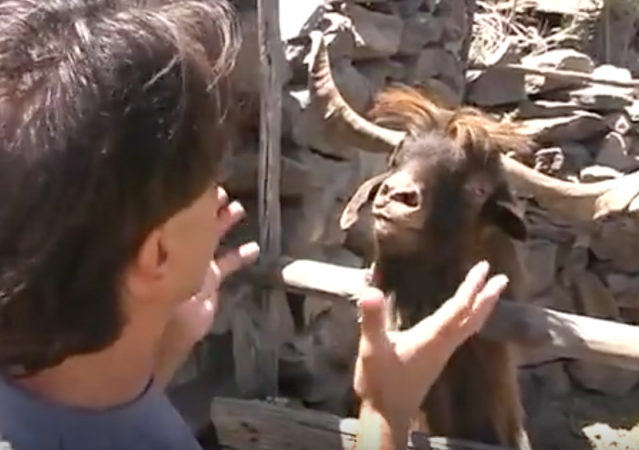 A Michigan labor union is less than happy with a group of hungry goats they claim are taking jobs from unemployed union members at Western Michigan University.

The American Federation of State, County and Municipal Employees, a 400-member strong union, filed an official grievance claiming, “the work the goats are doing in a wooded lot is taking away jobs from laid-off union workers.”

Goats are often used by local and county governments to assist in keeping ground cover and brush ‘trimmed’ without the expense of hiring a ground crew.

“AFSCME takes protecting the jobs of its members very seriously and we have an agreed-upon collective bargaining agreement with Western Michigan,” said Union President Dennis Moore. “We expect the contract to be followed, and in circumstances where we feel it’s needed, we file a grievance.”

The grievance alleges that the university did not notify the union that it was planning to use goat crews on campus, according to a chief steward report supplied to the Battle Creek Enquirer.

University spokeswoman Cheryl Roland said a small goat crew has been on campus this summer, but not to cut grass.

“For the second summer in a row, we’ve brought in a goat crew to clear undergrowth in a woodlot, much of it poison ivy and other vegetation that is a problem for humans to remove,” Roland said. “Not wanting to use chemicals, either, we chose the goat solution to stay environmentally friendly.

“The area is rife with poison ivy and other invasive species, and our analysis showed the goats to be a sustainable and cost-effective way of removing them,” she added.

The goats were formally introduced to the campus and local community on June 2 in parking lot 51 of the Sindecuse Health Center.

Unlike anything union related, the goats are ahead of schedule.

No word on if union members have directly confronted the goat crews, though I imagine an encounter would go down something like this:

Just keep them out of “Little Mogadishu” or you’ll have the Prostitute Union all over you!

The funniest thing that I’ve seen on the intermess this week.

Before,
“The area is rife with poison ivy and other invasive species, and our analysis showed the goats to be a sustainable and cost-effective way of removing them,” she added.

After,
“The area is rife with liberals and other invasive species such as uneducated, illiterate, non-English speaking, “refugees” [cough] from an entirely alien culture such as those from Muslim countries who likely will be on welfare for their entire lives, and our analysis showed the Trumpian idea of Personal Responsibility and productive work to be a sustainable and cost-effective way of removing adverse forces,” she added.

PS,
Meanwhile, a tsunami of robotic workers is about to hit the beaches in the coming years, and the unions are worried about goats?

Amazing. And I was impressed by a roomba.

I would always pull for a goat over a labor union.

I grew up in the country, and people out there were on the leading edge of this great movement in sustainability, environmentalism, and cost effectiveness. We used them to clear kudzu out of wooded property in Georgia by staking/tying them out with a collar on the neck and chain or rope to a stake or tree. We as kids did not like that system because those dumb goats would get those ropes or chains wrapped around every tree, bush or vine there was and create a lot of work for us untangling them. We wanted them fenced in and ranging within the fence, but fencing was time consuming and more expensive, and often times defeated the purpose.

Goats and sheep are hell on kudzu, and they will get as fat as a hog on it.

When I lived in Washington State, the livestock ads would include ads for “brush goats,” old goats that no longer gave milk or were too tough to eat. They were employed as you stated. They’re great on blackberries and devil’s club, too.

They aren’t called ‘scape goats for nothing.

I bow before your punnyness, sir. Even my wife and kids groaned upon hearing it.

Wouldn’t that be land scapegoats.

When your skill set is so low you can be replaced by a goat….

If the union sherkers had done their job, there wouldn’t have been acres of the campus overgrown and full of poison ivy and invasive species. And there would have been no need to hire the goats.

But doing their job is not part of their contract…

I liked goats even before I read this.

These goats should be deported to Mexico, Greece, Sicily and various other locales where they will be put to a much better and tastier use,completing the Great Circle of Life.

We don’t need to deport them. There’s at least one small business owner near me who can make very tasty use of free-range goat.

You must not have ever been to the Texas hill country. After you have enjoyed some bbq goat, eating brisket is like kissing Hillary. Okay, I might exaggerate a little, but it’s danged good.

Cooper’s in Mason usually has one going, but it goes fast. Back in the day before Mac and Ernie’s in Tarpley became a sit down place they made a goat bbq burger. I miss my bike. It was a constant quest for good food and pie.

talk about the goats getting their goat!

I LOVE that video!

I could only hope that the Unions get the same response, especially after the goats have been dining on poison ivy for a couple of days.

What’s it say about you if you can be replaced by a goat?

Why doesn’t the union just unionize the goats?

Then they wouldn’t be taking union member’s jobs.

Are goats the new mule?

I passed this on to a buddy of mine who raises goats. His comment on the video: “The behavior shown on that video is goat for ‘You shore got a purty mouf!’ The guy really shouldn’t turn his back….”