The House may have the votes to override Rauner’s veto. 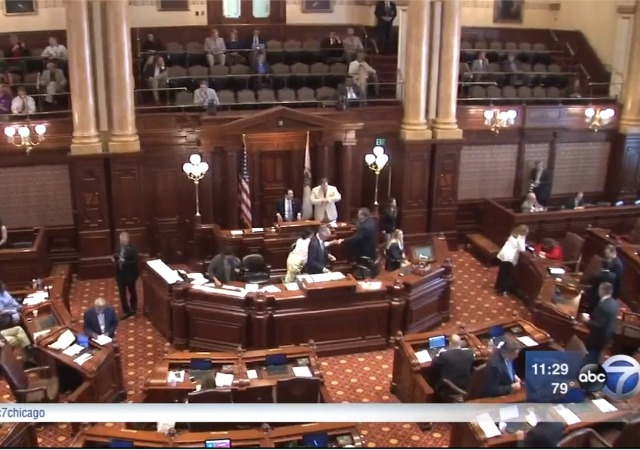 The Illinois Senate has just approved the massive income tax hike, two days after the House approved it. This bill will permanently raise the income tax 32% from 3.75% to a little under 5%. It also raises the corporate tax rate from 5% to 7%.

Republican Governor Bruce Rauner vetoed the bill this afternoon. The Senate voted to override Rauner’s veto 36-18. Now the bills go back to the House, which will vote tomorrow. 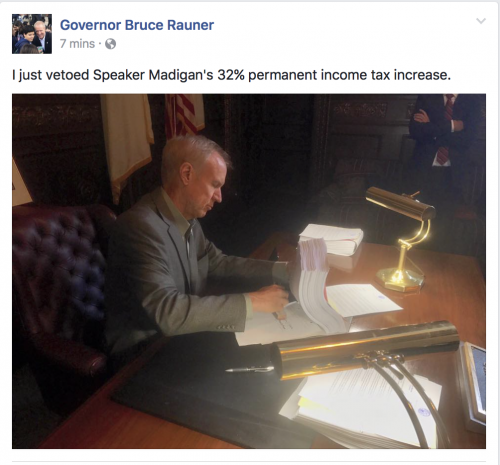 Here is the roll call on the override votes:

The Senate voted 36-18, with one Republican voting yes and two Democrats voting no.

Under the tax measure, the personal income tax rate would increase from the current 3.75 percent to 4.95 percent, which would generate roughly $4.3 billion. An increase in the corporate income tax rate from 5.25 percent to 7 percent would bring in an additional $460 million. The surplus revenue could be used to cover the cost of borrowing to pay down unpaid bills, Democrats said.

The legislation also would reinstate the research and development tax credit, which would expire in 2022, and increase the earned income tax credit for low-income families. It also would end several corporate tax breaks, including those for companies that operate on the continental shelves or shift production out of state.

The Tribune mentioned a little reported part of the bill:

An accompanying budget plan, which the Senate also quickly approved 39-14, would have the state spend a little more than $36 billion, about $4 billion more than it currently takes in from taxes.

Wait a second. The government wants to spend MORE than it brings in? Another prime example that the two houses have no desire to actually fix Illinois’s financial problems.

Here’s the other problem with that. You want to spend more than what you bring in, which means you need a loan. As I have blogged numerous times, Illinois’s credit rating is JUST ABOVE JUNK.

Fitch Ratings and S&P Global Ratings have urged “Rauner to accept” the bill when he receives it. Of course Democrat House Speaker Mike Madigan cheered at this idea, but Fitch told him to calm down:

Fitch wants to see a full-year spending plan, not a stop-gap measure like the one that financed Illinois’ government for just the last six months of 2016.

“Temporary or partial measures, or a failure to enact a budget within the context of this session, would result in a downgrade,” it said.

S&P also stated that “long-term damage has already been done.” From The Chicago Tribune:

“Even with a budget, however, it’s likely that Illinois’ finances would remain strained and vulnerable to unanticipated economic stress,” the agency said. “In addition to having accumulated record amounts of payables, the state’s university system has been deprived of state funding since January 2017. If a budget is enacted, the degree to which it closes the state’s structural deficit, provides a pathway for addressing the backlog of unpaid bills, and its impact on cash flows, will be important factors in our review of its effect on Illinois’ credit quality.”

But even if the ratings agencies don’t downgrade Illinois, the state still holds a crap rating, which will make it harder and more expensive to receive loans.

As mentioned above, Rauner has officially vetoed the bill. But the House may have the votes to override the veto since it passed the bill 72-44. Illinois legislative rules state:

After the House passed the bill, Madigan acknowledged that Rauner will probably try “to change the minds of 15 House Republicans who joined a 72-vote supermajority” to pass it. Madigan needs those 72 votes to override the veto.

They want to keep digging, as long as they dig only in their own hole, I’ll hand them another shovel. Only precaution would be to make sure they can’t get a bail-out later on.

They’re shooting for the legislative equivalent of a Federal disaster area, which means gobs of free money. So the worse they mishandle their own problems, the bigger the disaster, and the more likely a free payoff becomes. They’re not even subtle about it.

Why give them another shovel? If they insist on digging a deeper hole, a backhoe or an excavator would do a better job faster. Basically they are just doing his now.

Nobody wants to say it but Medicaid’s CHIP program makes up a significant portion of the state budget. Illinois currently covers children without legal status under CHIP while surrounding states don’t. This along with ‘sanctuary city’ status of Chicago and many surrounding suburbs provide a strong incentive for illegal immigrants to settle in the area. Dems won’t end the practice as it’s political suicide, but the tax base is leaving in droves. The answer isn’t ease taxes…

when all else fails, double down on stupid.

We now just need popcorn. And a wall, all around Illinois, to prevent the socialist-voting fools from fleeing the Frankenstate they’ve created.

May I remind you that not all who are stuck in Ill-annoy are socialist-voting fools. Some of us are trying to escape to sanity. Take away Chicago and the bulk of the collar counties, and the remainder of Ill-annoy is much more normal – just like an individual probably wouldn’t want his family to be judged solely on the basis of a crazy uncle….

Get out. For your own sake, and for your childrens sake.

Spoken by one who doesn’t have to walk a mile in crappy Illinois shoes…I’ll get out, as soon as I can find a job somewhere else. Easier said than done, unfortunately.

Workers in the state should vote them out of office.

the repubs should resign and let the state go into receivership and sale of state resources to highest bidder –
Soros owns these pols anyway so let him bail them out, if he wants to.
maybe google, apple or facebook.
twitter and amazon can kick in a few kronas.