‘For the love of God, treason is defined in the Constitution. This is not treason.’

‘For the love of God, treason is defined in the Constitution. This is not treason.’ 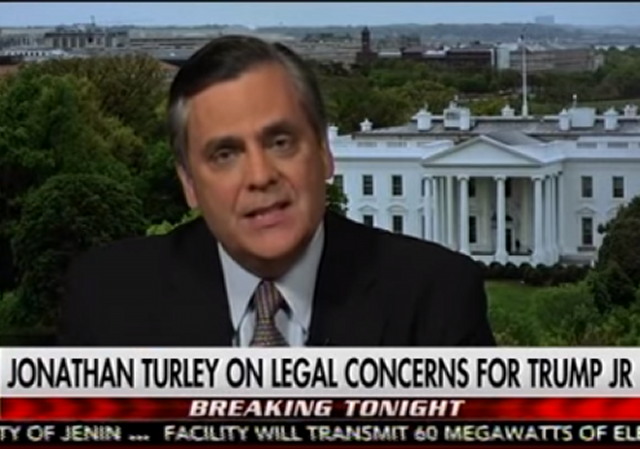 Democrats and their media allies are acting as if they’ve finally hit the Russian collusion jackpot over the revelation that Donald Trump Jr. met with a Russian lawyer. Hillary Clinton’s running mate, Senator Tim Kaine, has even suggested this could be evidence of treason.

Professor Jonathan Turley of George Washington University threw cold water on all of this during an appearance on FOX News with Martha McCallum last night.

GWU Law Prof. Jonathan Turley on Trump Jr. Meeting A Russian: “For The Love Of God… This Is Not Treason”

It is like we have this giant Rorschach test and people see whatever they want to.

The criminal code has defined elements to it. You just don’t find these ambiguous crimes. Some people have said this could be treason. For the love of God, treason is defined in the Constitution. This is not treason. Other people have said this could be a Logan Act violation. Well, Logan Act has been used once in 200 years and is facially unconstitutional. One said, well, if you take things of tangible value under the campaign laws and treat information like that, then maybe you have a campaign contribution violation. Well, yeah, but we haven’t seen that done. You could also treat it like a panda and say it’s an endangered species violation, but courts haven’t done that. So, I think that people need to take a breath…

What I’ve said to a lot of my friends who do legal analysis is, is this really the world you want to live in, where we broaden the definition of crimes so far that most any conversation could be a criminal act?

That’s a very dangerous world to live in, but more importantly, if information is now a thing of tangible value under federal campaign laws, then the Clinton campaign could be charged with the same type of offense, and a wide variety of other campaigns could be charged.

If you treated information as a campaign contributions every single politician of the moder era would be guilty many times over on both sides.

The ‘Law’
The Constitution
The ‘Love of God’
NONE of these things are going to quench the burning fires roasting the hatred in the hearts of the Democrat party!

A man convinced against his will is of the same opinion still!

If talking to a foreign citizen during a campaign is treason, what about Hillary and the Ukrainians?
Why can’t the news just report instead of create scandal out of nothing. (Selective scandal at best).
This is why non politicians do not run for office. As long as you either have a D next to your name or you go along to get along as a R, you don’t get a moment of rest. Ever.

Is Kaine Able to express an Ethical thought ?
He ‘personally’ is against abortions, but supports Plant Parenthood Slaughter including at time of delivery and first few months after that. (just a little hyperbole).

we escaped a horrible outcome if PantSuit and NoEthics had been elected.

How far behind is McLame in all this ?

And in January, Winnipeg is almost as hot as Fargo.

Kaine (one of my leftist Senators) is a 1000% sold-out SHILL for the Democrat Party.

For Pete’s sake – he WAS HILLARY’S RUNNING MATE!!!!

Not a biased opinion at all…… /sarc

Please PLEASE someone pull the plug on all of these idiotic, pretty yet empty-headed lemmings, these propagandists pretending to be journalists!!! It is POISONING the US both here and abroad (because these 24/7 LIARS are listened to by THE WORLD, not just the TV-brain-dead, gullible lemmings in the US).

I just FEEEEEEEEL like it has a “truthiness” (re: old-school Oprah) to it, ya know.

Surely it must be in lurking in one of those penumbras somewhere, behind a dusty file cabinet or something, right???

I feel your pain 😉

It seems to me, using the Hilliary standard, the important thing is: did Donald Trump, Jr. have any intent?

Better question might be, did he have a clue? Because many in the Trump camp are neophytes when it comes to politics it often seems like amateur hour. Is that always a bad thing I wonder. Those with experience have gotten us to where we now are – is that a good thing?

My take on these email “revelations”:

This is totally BS and bluster. If there is a provable link to Fusion GPS, then the whole sordid affair was a political hit job. If the Rock Star promoter had written Don Jr and said he had a captured Unicorn in his garage, would that be any more believable than his Russian collusion assertion?

get an eye test (and some Kava) – unless this was someone in ‘drag’.

4th, see “Emin” in relation to this story.

You need to follow your own advice because you’ve totally lost the script. Reading for comprehension is important.

Many of the comments from pundits and politicians have been on the level of “If we can find evidence of Z, then clearly it would mean he is guilty of Y!”

Well, yeah; and if we can find evidence that Trump, Jr. had someone kidnapped, killed, encased in cement and dropped in the river, clearly he would be guilty of murder. Call me back when you have that evidence. Until then, where there is apparently smoke, there may well be a dry ice machine.

If, if, if — if your bubbie had beitsim, she’d be your zaidy.

There remains no proof of anything other than a meeting which resulted in nothing. Everything else is hearsay, much of it second- & third-hand. The jackals are inventing new crimes on the fly. It may have been ‘careless’, to borrow Comey’s term, but in no way a crime.

All of the evidence I see confirms the stunning stupidity of the Democrats and MSM. And they keep offering up more evidence of this each day.

This “Russia” obsession is needed by the left and the those on the right suffering from TDS because it’s all they have. Other nonsense is too foolish for anyone other than their bottom feeding base.

Never mind there is plenty of other things, important things, to talk about, obsess about…

Oh wait, what about Ivanka’s pink dress with the big bows?

Never forget that this isn’t just Democrats; #NeverTrump gives cover without which this could not survive.

I would only disagree on the point of survival. As long as the MSM pushes it, it will survive. When the Democrats decide there is no more money to be raised on the issue, or the public is becoming hostile on being beaten about the head and shoulders by the issue and it won’t be a worthwhile issue for the 2018 Midterms, then it will no longer survive.

It gets more interesting by the hour:

This is more fun than the old Spy vs. Spy comic: