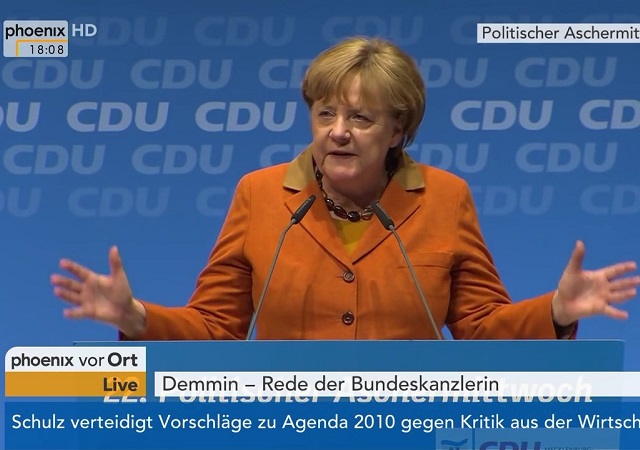 Since German Chancellor Angela Merkel embarked on her feckless and reckless refugee policy, Germany has encountered many problems with rising crime rates.  The latest serious problem is a gang of self-appointed “Sharia police” who are terrorizing women and gay people in Berlin.

A gang of armed Chechen Muslims are terrorising women in Germany who do not adhere to their strict interpretation of the Quran.

Reports suggest up to 100 men belong to the vigilante group, which ‘punishes’ Chechen women who are seen to behave immorally, including fraternising with non-Chechen men, smoking, drinking or visiting swimming pools.

Gay Chechens – many of whom sought asylum in Germany because of the Islamic Republic’s purge of homosexuals – are also victimised by the Berlin-based mob.

Two young Chechen women were seriously injured as a result of recent attacks in Berlin, while another two were threatened and chased, according to Tagesspiegel.

A video has been circulated among Berlin’s Chechen community in which a masked man points a gun at the camera and says:

“Here, in Europe, certain Chechen women and men who look like women do unspeakable things…

“Those who have lost their national mentality, who flirt with men of other ethnic groups and marry them, Chechen women who have chosen the wrong path and those who call themselves Chechen men – given half a chance, we will set all of them straight….

The gang does not discriminate between Muslims and non-Muslims, treating all who stray with equally-ferocious violence.

The self-appointed morality police involve Salafists from Chechnya, a predominantly Sunni Muslim region in Russia. The vigilantes are using threats of violence to discourage Chechen migrants from integrating into German society; they are also promoting the establishment of a parallel Islamic legal system in Germany. German authorities appear unable to stop them.

. . . .  The gang members, who also come from Dagestan and Ingushetia, have attacked Muslims as well as non-Muslims, including Christian asylum seekers at migrant shelters in Berlin.

The gang is linked to several Salafist mosques in the German capital, including Fussilet 33, which once served as the headquarters of the so-called Berlin Caliphate. The mosque was shuttered by German authorities in February 2017, after they learned that Anis Amri, the Tunisian jihadist who carried out the suicide attack on a Berlin Christmas market, had sheltered there.

Around 60,000 Chechens live in Germany, according to official statistics, although the actual number is believed to be much higher. Nearly 40,000 Chechens have applied for asylum in Germany during just the past five years; many have crossed the border illegally from Poland.

An internal paper produced by the Federal Audit Office (Bundesrechnungshofes) revealed that “the majority of the unauthorized persons in Germany are Russian citizens of Chechen ethnicity, some of whom have been linked to the Islamic terrorist environment.”

So far, Merkel’s ideas for combating this type of violence from Syrian refugees and immigrants is offering classes in how not to rape women (and boys), taxpayer-funded German language courses, and public admonitions to “integrate” into German society.  It’s not yet clear what, if any, solution she has for this Chechen volunteer “police” force that is terrorizing the German people in their own city.

Have these historical illiterates never heard of the Freikorps? Particularly the Weimar Republic version?

The vigilantes are just brownshirts for today’s German government.

Wake up, Europe: This is the future your “leaders” have planned for you.

Hate to admit it, but I feel myself moving toward not being concerned about mussi-on-mussi crime.

Except the Muslims aren’t simply preying on each other.

They should prey on one another 5 times a day, when they hear the call to preyer.

LOL. Embrace the suck, Germans. It will only get worse from here. Just ask the Swedes.

The problem is not radical Islam, but Islam itself.

Where Islam takes root, freedom will begin to die.

No biggie, they have the full confidence and support of the German Courts now.

“As your President, I will do everything in my power to protect our LGBTQ citizens from the violence and oppression of a hateful foreign ideology.” — Donald Trump.

what will 9th circuit say about that ?
how about muslim brotherhood ?
pester wright ?
B Hussein Obama ?
DummyCrap Party ?
JINOs ?
RINOs?

An article in this morning’s San Jose Mercury News reported that in California, there has been a year-over-year increase in reported hate crimes, those being where the intended victim is targeted on the basis of race, ethnicity or religion. Religious based hate crimes account for about 20% of all reported hate crimes.

Perhaps the author should delve further into his investigation and identify which group is most likely to have an inbred hostile, animosity towards Jews and gays. Next would be determine if there is any correlation to this group’s increasing percentage representation in the general population and the percentage increase in crimes specifically targeting Jews and gay men.

Duh! Read the koran if you want to see what awaits those who let these radical “Worshipers” into their countries. The violent ones that make the news are the tip of the islamic iceberg. The rest will silently agree with the violence perpetrated on the victims. This has been proven worldwide, poll after poll, of “Moderate” muslims. They agree at anywhere from 60 to 90% of the time with death for apostates, gays, and adulterers. The list is long for the things that “Moderate” muslims agree with the koran on concerning death to the infidel.

Ahh, but if you just read the context the Muslims will claim your taking their scripture out of context.

So I highly recommend you read the ahadith, the sirah or biographical literature, the tafsir (exegesis) of the scripture, and the Islamic histories.

There are both Shia and Sunni versions of the above. Take your pick. They’re all complete BS as the first biography of Muhammad wasn’t written (or at least the only one we have) until 200 years after he died. And ibn Isham, who supposedly edited an earlier work by ibn Ishaq, is quite frank about how he went about things. Anything thing ibn Ishaq wrote that wasn’t entirely flattering to the prophet of Islam got s***canned.

Folks, this isn’t how you do history. The funny part is, the later versions of everything have more detail than the earlier version. To a historian, that’s like a neon sign flashing the word “fake.” But it’s how Muslims do history. It’s all complete garbage. The first collection of ahadith, or teachings or “traditions” of Muhammad wasn’t compiled until about 240 years after, we are told, Muhammad died.

I really wish there was an edit function as my first sentence should have started out, “Ahh, but if you just read the Quran…”

Germany has been playing Russian Roulette with a PPK…

This is why it’s important to distinguish between Islam and Muslims. I like all decent people despise Islam. And that includes Muslims, though the don’t know it. They aren’t taught Islam. They are taught to believe in a 20th century version of Muhammad, which didn’t exist when Islam was ascendant where he’s a cross of Santa Claus and Jesus Christ.

It shakes their faith when us infidels are so bold as to point out that Muhammad as no such thing (If he even existed). That according to their own sources he beheaded up to 900 men of the Banu Qurayza and sold their women and children into slavery. Or after the battle of Khaybar tortured the location of buried treasure by lighting a fire on Kinana’s chest.

It’s in their histories. It’s why Salman Rushdie has a price on his head.

“14But even if you should suffer for what is right, you are blessed. “Do not fear their intimidation; do not be shaken.” 15But in your hearts sanctify Christ as Lord. Always be prepared to articulate a defense to everyone who asks you to give the reason for the hope that you have. But respond with gentleness and respect, 16keeping a clear conscience, so that those who slander you will be put to shame by your good behavior in Christ.…”

Christ did not deliver us the spirit of fear.