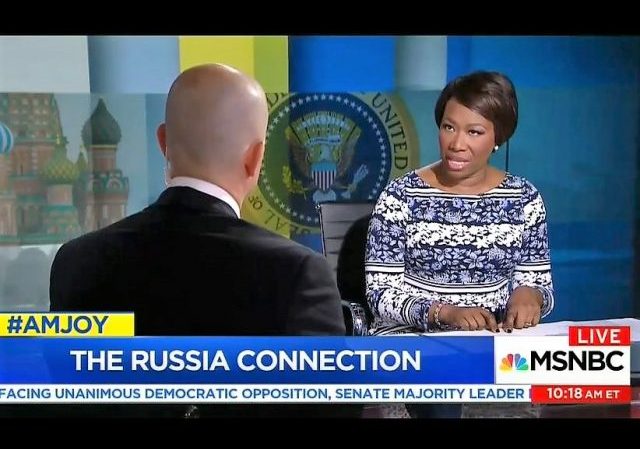 Yesterday, we noted Kellyanne Conway mocking CNN’s Russia fixation. Conway told Alisyn Camerota: “I know that we just like to say the word ‘Russia, Russia’ to try to mislead the voters. And I know that CNN is aiding and abetting this nonsense as well.”

Well, if CNN likes to say “Russia, Russia,” we’ll need to multiply that 28 times to understand the depth of MSNBC’s obsession with the subject. In the first hour of Joy Reid’s MSNBC show this morning, the word “Russia” or “Russian” was heard . . . 56 times!

Check out the YouTube we’ve prepared, in which we caught 56 Russky iterations. Good thing people didn’t agree to a drinking game of a shot of Stoli every time Russia was mentioned: the ER rooms would be full!

Watching Joy is particularly painful. For the life of me, I do not understand how this rude, racist, imbecile got a job. Any job.

Because Melissa Harris-Perry was a little too crazy for MSNBC…

While NO-Joy Reid is just as racist as Harris-Perry it seems Reid, thus far, sees no need to wear tampons as earrings. For MSNBC that’s an upgrade.

What…. you expected them to obsess over calculus or quantum mechanics?

Yes, yes .. it is odd to watch what appears to be “John Bircher’s on acid”, but it’s the sign of the times.

Obama’s legacy of forcing catastrophic anthropogenic global climate change from Africa to the Middle East to Eastern Europe and beyond is at stake, and all that Pro-Choicers can do is project, project, project.

Interesting they’re all fat, isn’t it?

They sure eat more than they are worth. If they were household pets, they’d be given up for adoption.

… the only thing you missed… the CNN russian salad dressing commercial!

Somebody in America has been trying to warn us the Russians were coming from at least the day I was born in 1955.

File into the hall and sit in front of the lockers with your hands protecting your head. Those were the days. Then later the Marines taught me that was not much protection and I should dig a hole. Now days protection is a 10 character password with upper and lower case letters with at least one special symbol and no dictionary words allowed. I guess that “password” wasn’t enough protection for the demorats. Maybe they should have dug a hole.

Oh, they dug a hole all right…and buried themselves in it.

Yes, but back then the left would have celebrated their arrival. Suddenly, after decades of having wet dreams about the kind of power Russian (Russian, Russian) leaders have exercised, they’re persona non grata.

Black, racist, hostile…what’s not to love?

That they’re fat. (See above.)

Oh m-m-m-a-a-a-n-n-n-n! Are they STILL talking about Malaysian Airline flight 370? I thought it had been established years ago that the Russians didn’t do it! When will CNN drop that story?