And then bragged about how JVP physically disrupted their participation. 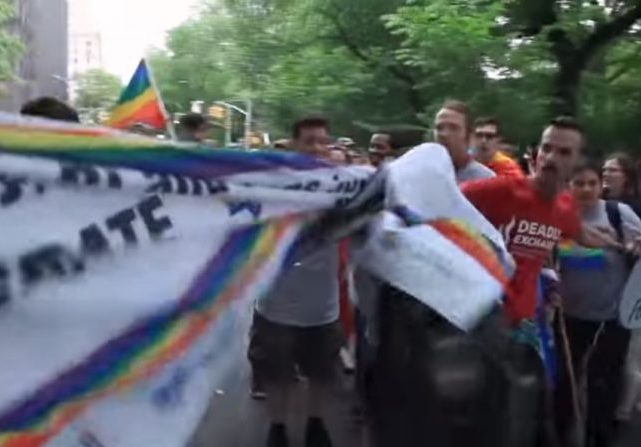 There apparently is no depth to which so-called Jewish Voice for Peace will not go in its anti-Zionist activism.

For those who are not familiar, JVP’s name itself is highly misleading, as it is not Jewish and is not for peace. Rather, JVP provides a Jewish cover for the anti-Semites and Israel-bashers of the Boycott, Divestment and Sanctions movement. One of JVP’s primary modus operandi is disruption — to make it difficult for pro-Israel voices to be heard without being shouted down or pushed off stage, or having their events disrupted.

JVP once even disrupted a NYC Council vote commemorating liberation of Auschwitz:

JVP also has a history of attacking the very sizable pro-Israel (or at least, not anti-Israel) LGBTQ community. We covered how in 2016 Jewish Voice for Peace helps disrupt Israeli LGBTQ group Sabbath event:

The targeting of the LGBTQ pro-Israel community is becoming an obsession for JVP. During the recent Israel Day Parade in New York City on June 4, 2017, JVP activists sought out and physically disrupted a particularly vulnerable group, Orthodox Jewish youth who had “come out” and were marching openly in the parade.

The group that organized the contingent, Jewish Queer Youth (JQY), wrote what happened:

This past Sunday, over 80 people courageously marched in the LGBTQ cluster of the New York Celebrate Israel Parade. JQY believes it is an incredible act of bravery for LGBTQ youth to proudly and openly march through an audience of over 40,000 predominantly religious Jews. Marchers included teens who were kicked out of their homes, schools, and synagogues just for being who they are. These are teens who often struggle with self-harm, suicidal ideation, and internalized shame. Yet almost miraculously, they muster up the courage to face the communities that rejected them. Their message to the Jewish community is very simple: “We all belong.” As far as JQY is concerned, these youth are heroes.

However, in their moment of courage and pride, this most vulnerable cohort of the Celebrate Israel Parade was targeted for sabotage, bullying, and harassment by an organization called Jewish Voice for Peace (JVP).

Seven JVP “disrupters” secretly infiltrated the LGBTQ marching cluster. They pretended to be part of our group, marching side by side with our teens. As our contingent approached 72nd Street, one of the JVP disrupters lunged toward our speaker system, pulling out as many wires as she could until our music went silent. At that moment, five other disrupters removed their shirts to reveal red shirts brandished with the words “DEADLY EXCHANGE” in black. In the absence of our music, they began yelling to cause a disturbance. They proceeded to block our marching banners with their own anti-Israel signs.

The disrupters had formed a human chain, aimed at preventing our group from moving forward. Efforts to move forward were met with physical resistance, intimidation, and screaming. Finally, police and security swarmed into our group creating more disarray and fear. People were pushed, trampled, and shoved. Our marchers were terrified and shocked. In this confusion, some in our cluster thought it was a terror attempt and immediately fled the parade route. Ultimately, five JVP members were arrested. Despite this sabotage attempt, our group managed to turn the music back on and completed the march with our heads held high.

JQY made clear that this targeting was deliberate by JVP:

This was an act of homophobia: According to Rebecca Vilkomerson, JVP’s executive director, “the LGBTQ contingent was a carefully chosen target”. Seth Morrison, a JVP board member told JQY, “We take pride in targeting the entire LGBTQ contingent”. The LGBTQ cluster was not targeted because of any organizational action, position or statement made; we were targeted because we had the audacity to march as an LGBTQ community. Had we not openly identified as LGBTQ this would likely not have happened. We were singled out for sabotage because of our sexual orientations and gender identities. There is a word for this kind of prejudice. Frankly, the idea that a non-LGBTQ protest organization is explicitly targeting and sabotaging LGBTQ people is unacceptable and terrifying. If a right wing organization admitted to doing the same we would call them a “Hate Group”. JVP must be held to the same scrutiny.

According to reporting in Algemeiner:

Hannah Simpson, who was among the LGBT cluster marching down Fifth Avenue, wrote about the confrontation on Facebook shortly after it occurred.

“None of our group was injured [but] we were shaken as all hell,” she said.

The Tablet magazine provides more details about the attack:

According to Mordechai Levovitz, one of the organizers of the LGBT contingent as well as three others present, a female protester interrupted the sound system, causing it to go silent. Then, as seen in footage below, an estimated five protesters from Jewish Voice for Peace, a fringe group that advocates the total boycott of the state of Israel, disrupted the LGBT group. What many people described to me as a “whirlwind” ensued. Four of the five people that had been marching with the LGBT group took off the pride shirts that were given out to the marchers, revealing red shirts that said “Celebrate the end of apartheid all together.” They formed a barricade around the group, held up signs that read “Queer Jews for a free Palestine” and “No pride in apartheid,” which they also began chanting. The five were arrested.

Levovitz said the protesters had “infiltrated” the group by pretending to be a part of the march and then “sabotag[ed] us.”

Rebecca Vilkomerson, the Executive Director of Jewish Voice for Peace, said the LGBT marching contingent was “a carefully chosen target.”

Alissa Weiss, a JVP “Rabbi,” also admitted to deliberately targeting LGBTQ participants in the parade, including the JOY contingent:

“…one of the six actions that day targeted the LGBTQ contingent, and one segment of the LGBT contingent that the protesters disrupted included Orthodox youth who are newly finding their voice and their place in the Jewish community as out, queer Jews.”

JVP bragged about the supposed success of the disruption on its website: 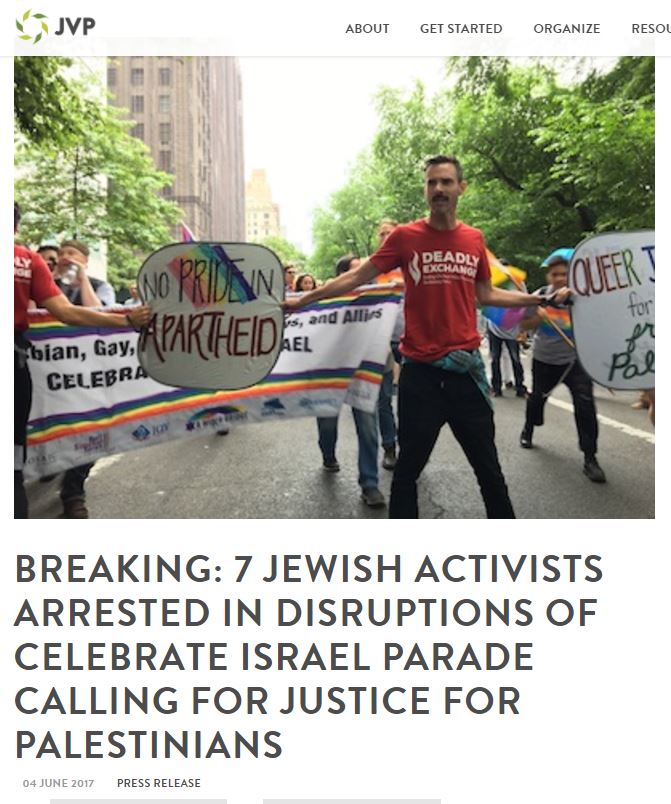 Such a brave group of people, JVP, picking on at-risk LGBT Jewish youth. The infiltrators wore t-shirts reading “Deadly Exchange” and held signs reading “Queer Jews for Palestine.” How they thought that pushing and shoving fellow queer Jews would help the Palestinians is beyond me.

JVP isn’t trying to help Palestinians. They are a group so driven by hatred of Israel that it has become their religion. Bashing at-risk LGBTQ youth is acceptable for their cause.

Of course, these “social justice” twits are so manifestly idiotic and utterly incapable of rational thought that the exceptionally unpleasant realities of life for gay men or lesbians or the “transgendered,” in any Islamic country (or, the Palestinian territories, for that matter), with death penalties being commonplace, and, a whole slew of punishments short of death being meted out, escapes their consciousness.

And, to top it all off, Israel — the target of the infantile ire of these twits — is, in actuality, the only place in the Middle East where an LGBT person could actually visit and live without fear of the reprisals and persecution that are de rigeur under the benevolent and tolerant banner of Islam.

More like lemmings — or the “kapos” (the Jewish “prisoner self-administrators”) of the nazi concentration camps: in a system designed to turn victim against victim, as the prisoner functionaries were pitted against their fellow prisoners in order to maintain the favor of their SS overseers. Of course, the SS murdered them as well. Some did escape, but were caught and executed after the war.

These “activists” area sick bunch, but they’re going down alone – and when THEIR backs are against the wall. good luck looking to the rest of us for any help.

At what point does a severe physical beat-down become a legitimate option?

“At what point does a severe physical beat-down become a legitimate option?”

It already is in places NOT NYC, which is one of the only places JVP can operate freely.

They wouldn’t try that in Garland, TX.

These are the same people who sat on Judenrats, sending their fellows to the camps, and who were kapos in the camps, abusing and exploiting them.

Hit them hard in their wallets with civil rights lawsuits. Identify them and put them on defensive with investigations and limit their movement with travel limitations. Make it very expensive for them to operate.

Cute. They exercise their intolerance and Israel get the blame.

notamemberofanyorganizedpolicital in reply to Humphrey's Executor. | June 12, 2017 at 2:19 pm

Methinks that is these PLO-lovers’ intentions.

When it comes to a dispute between the Jew-haters and the homosexual/deviant lobby, I don’t think I could root for either of them.