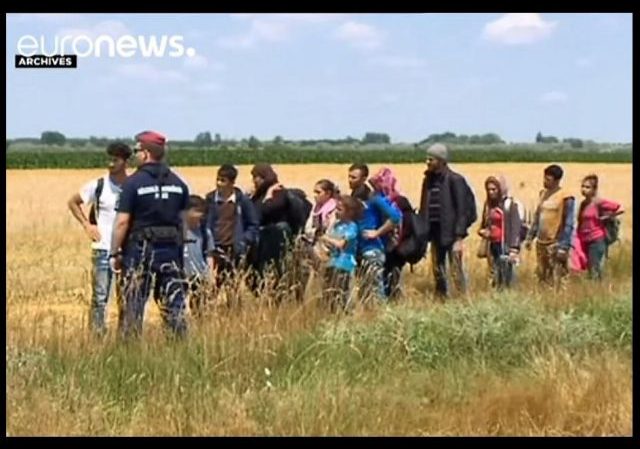 The Czech Republic, Austria and other countries in Central Europe are forming a coalition which opposes demands by the European Union that they meet certain quotas on accepting migrants.

Defense officials of six Central European countries and the Balkans have pledged close cooperation in tackling migration with all possible means including use of armed forces.

The countries — Austria, Croatia, the Czech Republic, Hungary, Slovakia and Slovenia — have created a grouping called the Central European Defense Cooperation and want to be a role model for the entire European Union.

Among the group’s goals is that all migrants who want to apply for asylum in EU countries have to do it in centers outside the bloc.

Austrian Defense Minister Hans Peter Doskozil said after a meeting in Prague on Monday that his country has been preparing a detailed action plan of cooperation for the six whose military forces will train in a joint drill in next few months.

Here’s another report from Euronews about actions the EU is taking to punish these nations:

The European Union announced this week that it would begin proceedings to punish Poland, Hungary, and the Czech Republic for their refusal to accept refugees and migrants under a 2015 scheme the E.U. commission created. The mission’s aim was to relieve Greece and Italy of the burden from migrant waves arriving from the Middle East and Africa, largely facilitated by European rescues of migrants in the Mediterranean.

The conflict between the EU and these three nations of the Visegrád Group is not just about the authority the EU can arrogate to itself when facing an emergency (one largely of its own making), but about the character of European government and society in the future. It is hard not to conclude that the dissenting countries are correct to dissent. Hungary, the Czech Republic, and Slovakia had voted against the 2015 agreement. Poland’s government had supported it then, but a subsequent election saw a new party come into power that rejected the scheme.

There is no doubt that Italy and Greece are under strain. This week the mayor of Rome, Virginia Raggi, pleaded with the Italian government to stop the inflow of people to her city. Raggi is a member of the Five Star Movement a Euroskeptic and anti-mass-migration association. Her election was a distress signal in itself, sent by the electorate. And Raggi has sent another such signal to Italy’s government, saying that it is “impossible, as well as risky to think up further accommodation structures.”

Remember during the Brexit vote, when supporters said they didn’t want bureaucrats in Brussels telling them what to do? This is one of the things they were talking about:

Part of what’s fueling this fight on both sides is the tidal wave of migrants in Africa who are just waiting for the chance to flood into Europe.

Up to 6.6m migrants waiting to cross to Europe from Africa: report

Europe could face a new wave of migrant arrivals this summer, a leaked German government report has warned. Up to 6.6m people are waiting in countries around the Mediterranean to cross into Europe, according to details of the classified report leaked to Bild newspaper.

They include more than 2.5m in North Africa waiting to attempt the perilous crossing by boat. Angela Merkel’s government has not commented on the report, which the newspaper says was marked for internal use only.

There are fears of a dramatic rise in arrivals as the summer weather turns favourable for sea crossings. Growing numbers of migrants are known to be attempting to reach Europe by boat in the wake of the closure of the Balkan land route last year.

migrants ?
nope, INVADERS, and the 6 middle european countries have been invaded numerous times in the past and can tell what is going to happen and their expense.

this is what obumbler and the klintoons are trying to do to US(A) as well. We should get on our knees and thank our lucky stars that DJT is POTUS.

DJT as President doesn’t matter until a few thousand Democrat judges are no longer on the bench.

Yup. Colonists. The advance force. They’ll get the place ready and then send for the wives and children.

I wouldn’t be surprised if Poland joins this group soon.

Indeed. Poland is a big country. It’ll be interesting if Italy joins that group. Look up how Italy fights ISIS and tell me if they’re more aligned with Germany or the Central Europeans. Whatever happens there will be key to the future of the EU. Other than that, if CNN (and other mainstream outlets that lean left) reported on the Mongol Horde they would have sided with them and against the countries who pushed them back.

‘Retaliatory actions.’ How is this not the soft fascism of unelected bureaucrats?

I always thought immigrants were a mixture of men, women and children but if you look at some of the hoards marching into Germany or at the resettlement camps they are mostly young men. As we see in our own nation with young black men with no work skills and poor social skills, there is not much of a future for them and leads to civil unrest, just like here. Why is this so difficult for our social engineers to understand? These nations opposing this wave of unwanted immigrants may be our salvation.

I like the outline of their plan. Hope they stick to their guns (pardon the pun). Wish our government had our nation’s interests held foremost as they clearly do.

EU bureaucrats in Brussels are a first-order forcing of catastrophic anthropogenic immigration reform. If they cared, they would vow to position forces in Obama et al’s elective war zones in order to secure people where the live and not merely the survivors following a trail of tears. Russians did this (back the refugees) in Ukraine following the violent coup in Kiev. Europeans could certainly do this in Syria, Libya, Somalia, and wherever else peace is being waged.

I like how 6 different countries in Europe, many of whom have historical animosity towards one another, all agree on the devastating costs of this unilateral action and the EU’s response is to hammer their fist from on high and say no.

Perhaps you should listen to that many members of your coalition? It’s a real shame they are financially dependent on Germany.

I can see Brussrls trying to do something stupidly heavy handed and the central europeans saying bye bye and forming the new Central European Union.
Maybe their monetary unit will be called the Clue.

There i also an EU rule that you must apply for asylum at the first EU country you enter before moving on. The Central EU countries are NOT those countries!! Greece and Italy are usually those countries!

Here in Slovakia, a CHRISTIAN Country with a HUGE Cross in the middle of our flag we will not cow-tow to those who would remove that cross.

The Socialist PM Fico says: “There are no mosques in Slovakia! Nor will there be”….

…and we have a law that you need 20,000 signatures of citizens to start a new religion (or a branch of an old one….LOL) in Slovakia, and we just do not have that many Slovak muslim citizens.

“They include more than 2.5m in North Africa waiting to attempt the perilous crossing by boat.”

Actually the crossing isn’t all that perilous, as these reporters well know but don’t want their readership to know. A EU agency, the Border and Coast Guard Agency more commonly referred to as Frontex, will pick these invaders up and transport them to Europe if they manage to get a certain number of miles from the North African coast. Some of these invaders don’t get the requisite number of miles off of North Africa to qualify for “rescue” and transportation to Europe in their rickety, overloaded boats and for them life sucks. But the distance is still short, most boats make it, and the Frontex ships are entirely seaworthy. So for them there is nothing perilous about it. The EU is safeguarding their transit to the land of welfare benefits, blond girls (or boys), and rape.

“Remember during the Brexit vote, when supporters said they didn’t want bureaucrats in Brussels telling them what to do? This is one of the things they were talking about…”

Yes, just one of many things. One of the things that put the BREXIT supporters over the top was the release of documents from the Prime Minister’s office dating back to the early 1960s. They detailed exactly how the EU intended to abolish national sovereignty of the member states. Incrementally, and with the attendant need to lie about how the next step, again well detailed in the documents, was just some loony conspiracy theory. The architects of the EU recognized the need to boil the frogs slowly lest they jump out of the pot. As the Brits did.

Richard North who blogs at EU Referendum wrote an excellent post about the intentional, decades-long con game that the architects had planned in the 1950s well before France, West Germany, Italy, the Netherlands, Belgium, and Luxembourg established the European Economic Community, also known as the Common Market, by signing the Rome treaty in March 1957.

That was all that was intended, the signatories agreed to lie. And who could object to a common market? They lied both because they had to deceive their own electorates about the intended end state while their voters still had a chance to do something about it as well as suck other countries into the scheme. And those other countries’ governments didn’t need to be deceived; they were quite willing to be in on the lie. The documents from the UK’s PM’s office indicate he found the idea of giving up the UK’s national sovereignty attractive but he didn’t think he could get away with it.

It’s also no accident that the EU waited until the day after the BREXIT vote to announce their plan to impose an EU military on its member states. And somewhat later announced their plan to create an EU central bank. Both of which would essentially abolish national institutions. It was baked into the cake from the start. But saying so would have swung a referendum they were confident of winning against them; admitting the truth before the BREXIT vote would have inflamed UK public opinion against them. It was only after they lost that they could allow the mask to fall off.

I wish I could find that post, but unfortunately Richard North put it up a few years ago. It might even have been a series of posts, so detailed were they. But my search skills aren’t up to the task. Suffice to say one of the reasons the referendum to leave the EU was successful is that Britons knew they had been lied to. They had been lied to by the EU, and their own government was in on the lie.

Those six countries have always been victims of the likes of Germany, France or Russia. Looks like once again, Europe’s elites are pushing them into the corner again with nowhere to go. I like to see them stand up for themselves, but they’re going to need some additional help.