California Democrat Official Yells at Gay GOP Volunteer: “Which one of you —holes is the gay?”

California Democrat Official Yells at Gay GOP Volunteer: “Which one of you —holes is the gay?” 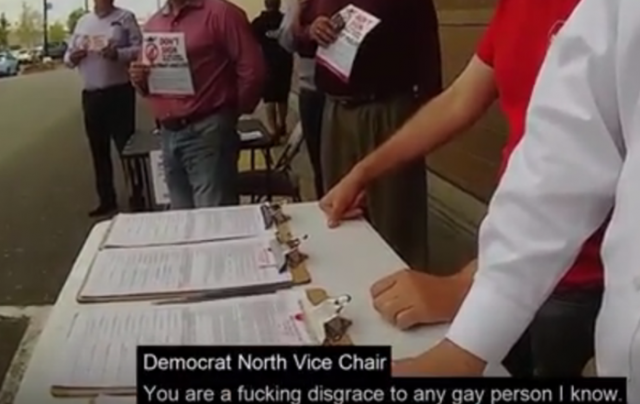 Legal Insurrection readers may remember my post on a launch of a California recall effort to remove state Senator Josh Newman (D-Fullerton), who voted for the $52 billion road repair package, paid for by fuel taxes and registration fees, just four months after he took office.

Unhappy that their super-majority status is in jeopardy, Democratic politicians in Sacramento inserted language into a bill for a veteran’s cemetery that would kick a recall vote into the next general election.

Over impassioned objections from GOP lawmakers, California Democrats on Thursday used a budget maneuver to help out a freshman colleague, Sen. Josh Newman, who faces an ugly recall battle in Southern California after voting for increasing the state’s gas tax six months after he was elected.

Slipped into a budget-related bill on a veteran’s cemetery was a provision to add new requirements for qualifying a recall petition for the ballot. Such changes would almost certainly delay a Newman recall to a general election.

Independent-minded Californians are angry at the political manipulation and dirty tricks. On The Liberator Today website, San Diego pundit B-daddy pointed out that while the rest of the nation was focused the shooting of Congressman Steve Scalise, as well as congressional associates and police responders, California was solidifying into a monolithic, one-party state.

Going Hugo Chavez one better, the Democrat controlled California legislator is taking action to ensure that one of their own who voted for the hated gas tax won’t get recalled….How long before a third party movement among disaffected Democrats arises to resist this tyranny?  Don’t hold your breath.  Meanwhile, people are voting with their feet, leaving California.

San Diego conservative talk show host, Carl DeMaio, is one of those leading the recall efforts. DeMaio is gay, as are several of the volunteers who are assisting in gathering signatures for the petition. They were verbally assaulted by a leading Orange County Democratic Party representative during an event this weekend.

A local Democratic Party official was caught on videotape verbally accosting signature gatherers in California during Pride weekend with a torrent of curse words and demanding to know, “Which one of you —holes is the gay?”

The official, Jeff LeTourneau, followed up by saying, “You are a f—ing disgrace to any gay person I know, you piece of s—.”

The exchange occurred in the parking lot of a Fullerton, Calif., Walmart where LeTourneau, a Vice-Chair with the Democratic Party of Orange County who is gay, discovered that gay volunteers were helping a grassroots group collect signatures to unseat Democratic state Sen. Josh Newman. The effort is in response to a gas tax hike that recently passed the Legislature along party lines.

…Throughout the exchange, DeMaio and the publisher of a gay news site could be heard trying to placate LeTourneau with phrases like “Don’t be hateful” and “Don’t be so angry.”

At one point, LeTourneau got into an exchange with a shopper who approached the petition table and criticized the Vice-Chair for blocking access. She asked him to move.

DeMaio’s team went on to collect a number of signatures after the incident, despite having a slow start prior to LeTorneau’s verbal assault. DeMaio shared these thoughts about the tirade.

It is both arrogant and offensive for a Democratic leader to suggest that, unless you toe the Democratic Party line, you are unwelcome in the LGBT community. Democratic politicians do not get to say who is LGBT or not. Being LGBT is not a choice – we are born this way. But we do get to choose our political party and which issues and candidates we want to support or oppose and that is exactly what the gay volunteers in the Recall against Senator Josh Newman are doing. They oppose the higher gas and car taxes that Senator Newman has voted for and simply want him removed from office before he raises more taxes on working families.

For a party that preaches tolerance and diversity, this Democratic leader is showing intolerance and is resorting to bullying tactics to force conformity of political thought.

Americans don’t take kindly to being bullied. If the approach in the video is the one that the party intends to use nationally, then 2018 should be another epic year…for Republicans. And, given the response of Californians who witnessed the exchange and coupled with the legislative dirty tricks, the Golden State may get a bit redder then as well.

Doubt me? Stranger things have happened.

We should probably expect the “Gays for Sharia” LGBT rioters to start harassing petition volunteers soon. No word on the “Jew for Hitler” rioters. The Soros funding is probably still pending.

Oh, I don’t know … The Faithful of at least one party seem to lap it up.

Classic exchange:
“I’m going to make sure everyone in the LGBT community knows…”
“They already know. I publish San Diego Gay & Lesbian News. They know who I am.”

[T]his is a wake up call to the LGBTQ community: You have lost your political power within Liberalism. You will still be used as convenient victims because Socialist Intelligentsia knows you will dutifully respond to the call, act all enraged and go away as told. They know they trained you well and can perform on cue. But you are now unpaid volunteer clowns in their circus. why?

Granted, Miguel was talking about the anniversary of the Pulse nightclub massacre, but the point stands.

Liberalism considers the LGBT community a voting block — more specifically, THEIR voting block, firmly in their back pocket — and will apply the “No True Scotsman” argument to any member of the community who strays from the party line.

More importantly, because among LGBT-ers, voting Republican usually makes one a pariah, Liberals don’t feel they need to worry about catering to LGBT needs or concerns.

So, this is a wake-up call to the LGBT community: The Left considers you firmly in their pocket. They won’t listen to you; they feel they don’t need to. You are the battered spouse: “Where are you going to go? Who’s gonna take you in?”

Sound familiar? That’s what you are to them.

So stop being the battered spouse. Leave the bastards. Empower yourselves with the freedom that is your birthright as Americans.

Come on over to our side. You are welcome to stay as long as you like. 🙂

notamemberofanyorganizedpolicital in reply to Archer. | June 16, 2017 at 4:48 pm

RE: “…because among LGBT-ers, voting Republican usually makes one a pariah, Liberals don’t feel they need to worry about catering to LGBT needs or concerns.”

Archer in reply to notamemberofanyorganizedpolicital. | June 16, 2017 at 5:53 pm

I had meant to explicitly say that the Leftist indoctrination is complete and the community backlash is self-enforcing when it comes to voting ‘D’ or ‘R’, but forgot to include that part.

Glad you got it anyway. 🙂

The Right encourages freedom of thought in a way that the Left does not. The Left has intentionally cultivated “an unaware and compliant citizenry” (https://wikileaks.org/podesta-emails/emailid/3599) as their voting base. Independent thought jeopardizes the work they put into cultivating such an electorate.

The Left mocks conservatives for being so argumentative. They are smug about their solidarity. But that solidarity is the result of group think – a program enforced by brain washing and hypnosis techniques that discourage thinking and encourage blind obedience, with serious consequences for any deviation. It must be very convenient not having to think for oneself.

You should add: “Don’t believe us? Look how they’re treating the black community vs illegal immigrants. They know they can get more illegals in for votes.”

At some point, and not too far in the future, someone is going to decide they’ve had enough of this kind of crap by the Party of Non-Tolerance and just knee-cap the mouthy idiots…though I must admit I’m more in favor of the taser approach, with multiple jolts, until there’s an admission of idiocy.

They are so damn Pro-Choice. They really need a conservation of principles.

In the [class] diversity spectrum, transgenders are just another color in the rainbow. With proper filtering or constructed congruence (“=”), they can be deemed worthy or unworthy, selectively.

The suspense is killing me: so which one of the a-holes is the gay?

I think the case could be made that this guy committed simple assault by using fighting words and was intimidating the signature gatherers by invading their space. Certainly nobody in the county DemocRat party will do anything but applaud their vice-chair’s tirade, and more’s the pity.

This is exactly how the shooter got all pumped up to kill Republicans this week.

I do believe that the shooter was mentally unstable. But when a conservative does something similar, the same applies. The reason so many shooter-types are liberals is because liberals have a larger pool of unstable people from which such extremists can come. Evidence for this theory are the riots and lesser lashings out since Trumps election. No such analog (mass protests against Obama’s elections) exists on the right, demonstrating that conservatives are far more stable as a group than the Left.

And for those who will point at the Tea Party, that was way more of a protest against policies, and certainly less violent.