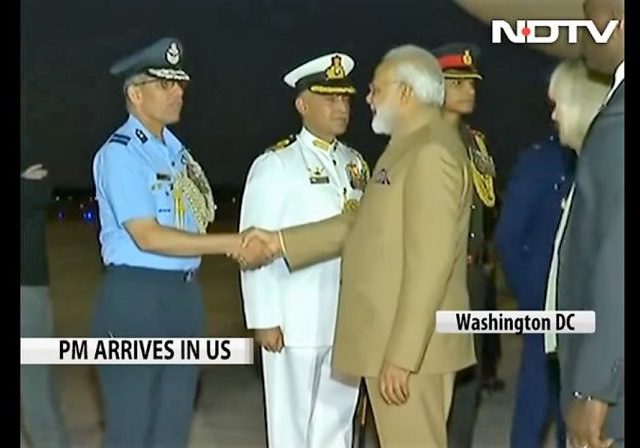 “Donald Trump will host visiting Prime Minister Narendra Modi for a “working dinner” on Monday, the first for a foreign leader by the US President at the White House in his five-month term,” leading Indian daily India Express reported.

Ahead of Monday’s meeting, President Trump took to Twitter to welcome Indian Prime Minister, calling him a ‘true friend.’

“I think you can expect the two of them to set forth a vision that will expand the U.S.-India partnership in an ambitious and worthy way of both countries’ people,” White House Press Secretary Sean Spicer told reporters.

Look forward to welcoming India’s PM Modi to @WhiteHouse on Monday. Important strategic issues to discuss with a true friend!

Thank you @POTUS for the warm personal welcome. Greatly look forward to my meeting and discussions with you @realDonaldTrump. https://t.co/lOfxlLI7v0

With more than 30 million followers, Prime Minister Modi is the second most followed world leader on Twitter after President Trump.

President Trump approved a $2 billion defense deal ahead of the bilateral meeting. Faced with Chinese naval build-up near India’s western coast, the country hopes to procure U.S.-made unarmed surveillance drones to keep an eye on the coastline. China is building naval presence in Pakistan’s strategic Gwadar Port on the Arabian Sea.

The bilateral meeting comes in the wake of renewed Chinese sabre-rattling, with Communist regime reaffirming its claim on South China Sea, where its military continues to build artificial islands.

“As Prime Minister Narendra Modi heads to Washington, China has warned India and the U.S. that any moves to deepen military ties in the Asia-Pacific should steer clear of the contested South China Sea,” India’s leading current affairs magazine India Today reported:

Apart from tackling Chinese expansionism, a closer U.S.-India strategic alliance could have a stabilising effect on Afghanistan and the region. “[There’s a] real opportunity for Modi and Trump it reach strategic convergence on Middle East, where our interests are increasingly aligning,” said James Jay Carafano, Heritage Foundation’s senior national security expert.

After U.S. pull-out from the Paris Agreement, global climate change agenda led by German Chancellor Angela Merkel rests solely on China and India. Unlike liberal Western leaders, the Asian giants have no ideological commitment to climate change. India as a net beneficiary of the Paris Agreement and has sound economic reason to support the agenda. After the U.S. withdrawal, France and Germany will be alone in footing the huge bill to keep India and China on board.

During his visit to France and Germany earlier this month, Prime Minister took the moral high ground on climate change. India will go “above and beyond” the 2015 Paris accord, vowed Prime Minister Modi. This is in sharp contrast to his pervious positon. “Climate has not changed,” he told a group in Indian students, responding to a question on climate change in 2014.

However, going by Indian Prime Minister’s recent statements, he will not be raising the issue of climate change in Washington.

After eight years of Obama administration’s internationalist and ideology-driven foreign policy, Monday’s meeting offers both leaders the opportunity to reset the bilateral ties on the basis of mutual and national interests.

Twenty-five years after Jerusalem and New Delhi established diplomatic relations, India has become one of the largest buyers of Israeli military hardware with annual defense deals worth over $1 billion. Prime Minister Narenda Modi is expected to undertake the historic first visit by an Indian PM to visit Jerusalem in early July, to highlight the growing bilateral relationship between the countries.
http://www.jpost.com/Israel-News/Defense-ties-with-India-booming-like-never-before-492237

India and Pakistan are now full members of the Shanghai Cooperation Organization along with China, Russia, Khazkhstan, Kyrgyzstan, Turkmenistan, and Uzbekistan. Also, Russia remains India’s main arms supplier. India is merely playing nice with all the major powers, and its dealings with the US do not portend any realignment.

There’s more to the story than military hardware purchases:

I never fully grasped the dynamic between U.S. – India relations. The U.S. and India always seemed to me to be natural allies. India’s legal and business traditions are firmly rooted in the Anglo tradition, as is the U.S. Yet during the cold war, India aligned itself with the Soviet sphere of influence.

Instead the U.S. and Pakistan were diplomatically aligned. The U.S propped up Pakistan’s president General Zia who was a dictator par excellence. The legal and business traditions of Pakistan antithetical to the Anglo traditions.

The alliance with Pakistan was formed during the Cold War, when India was leaning socialist domestically and the linch-pn of its foreign policy was to pose as the leader of what was then called the non-aligned movement. It was essentially pretending to be neutral. But it was only a pretense as the USSR was its arms supplier of choice.

Even the appearance of an alliance with the US would have undercut their foreign policy pretenses. As a Sailor who spent 20 years in, much of it in the Indian Ocean, I can tell you that the definitely saw us an adversary back in the old days. India was more favorably disposed to the USSR because they didn’t have much of a navy while we were the 900lb gorilla anywhere we chose to sail. Since India fancied itself as the regional power in the Indian Ocean area they greatly resented our presence. And the Indian navy was a credible force compared to other regional navies. But not when confronted by a single USN Carrier Battle Group or CVBG as it was known back then (now referred to as a Carrier Strike Group or CSG).

But the Indians seem to have come to their senses now. I think the growing power of the Chinese People’s Liberation Army Navy or PLAN and its designs on the Indian Ocean has something to do with it. They are trying to establish a naval base in the region, probably through an agreement with India’s neighbor, Burma. And there even rumblings that Chinese naval strategists even view the Andamans and the Maldives as part of its “island chain” defensive strategy. 30 years ago when I signed my life away to the Navy that would have been a thought so ridiculous nobody could have conceived of it. But given that the Chinese are attempting to lay claim to the entire South China Sea it’s not so far-fetched anymore. Now the Indians are more worried about China than they are about us.

Thank you very much for that very informative explanation.

Here in Silicon Valley, I have worked with many Indians and count them and their families among some of our closest friends. They are also more American than many other people, i.e., white progressives, I know. They maintain deep respect for our our Constitution and the rule of law. They also tend to be conservative in this deep blue area.