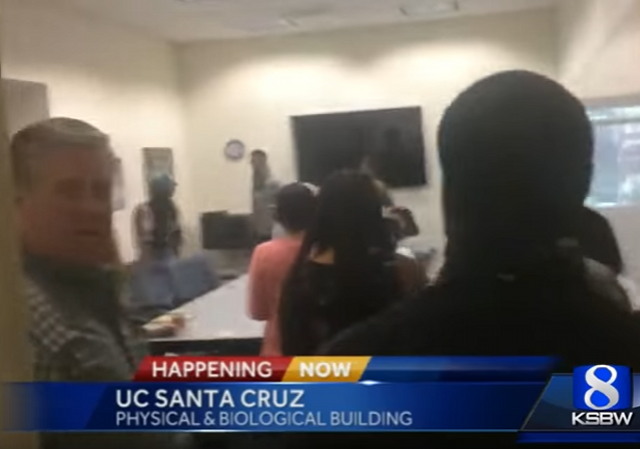 As we reported in an earlier post, the Afrikan Black Student Alliance took over a building at UC Santa Cruz this week and issued a specific set of demands, including mandatory diversity training for other students, repainting of Rosa Parks house and housing guarantees for “ALL African Black Caribbean identified students.”

Along the way, some of those students shouted anti-Israel and anti-Semitic slurs.

The university has agreed to all of the student demands.

UC Santa Cruz has agreed to the demands of the Afrikan Black Student Alliance after a three-day occupation of Kerr Hall, the primary administration building on campus.

To loud cheers of victory, UCSC director of News and Media Relations Scott Hernandez-Jason stood before hundreds of students at Kerr Hall about 5:30 p.m. Thursday and announced that the university was committed to better serving its African, black and Caribbean-identified students.

To illustrate this, UCSC Chancellor George Blumenthal agreed to the Alliance’s demands and made the following commitments:

• UCSC committed to extending up to a four-year housing guarantee to all students from underrepresented communities who applied to and live in the Rosa Parks African American Theme House.

• UCSC committed to converting the first floor lounge area of the Rosa Parks African American Theme House from housing back to a community lounge space.

• USCS committed to painting the exterior of the Rosa Parks African American Theme House in the Pan-Afrikan colors red, gold and green.

• USCS committed to delivering a mandatory “educational diversity” orientation to all incoming freshmen and transfer students.

KSBW News provides this video report. Apparently the meeting between officials and the students was moved to a separate location on campus because administrators “feared for their safety.”

Buried at the bottom of the Santa Cruz Sentinel report is this curious tidbit (emphasis added):

In addition, during the rally that preceded the occupation of Kerr Hall on Tuesday at Quarry Plaza, members of the Afrikan Black Student Alliance verbally attacked Jewish students, according to Santa Cruz Hillel Director Sarah Cohen Domont.

“Our students were, on three separate instances, subjected to protesters yelling, (expletives and anti-Semitic insults) and one of our Israeli flags was torn down,” wrote Cohen Domont in a public statement. “The ABSA called for protesters to stand in solidarity with their Palestinian brothers and sisters.”

Tuesday was Israel Independence Day. Santa Cruz Hillel and its “pro-Israel partners” had gathered in Quarry Plaza to celebrate.

UC Santa Cruz has had a problem for years with such attacks on Jewish students arising out of the anti-Israel activism:

Another form of intimidation is the disruption of events sponsored by Jewish organizations, now routine on some campuses. “If it’s something that has to do with Jewish students or Israel, it will just get shut down routinely.” explains UC Santa Cruz Hebrew lecturer Tammi Rossman-Benjamin to Aish.com….

“The implication that I, as a Jewish student and leader in the Jewish community, should not be allowed to vote on an issue that so deeply impacts the Jewish community, and that I should abstain because I cannot be trusted due to an alleged, ‘Jewish agenda,’ echoes the racism Jews have faced all over the world throughout our history,” Bernstein posted on Facebook. “I am calling on the leadership at UC Santa Cruz, from the student level on up to start taking concrete action to get the anti-Semitism at this campus under control.”

This is sadly not a surprise. As Professor Jacobson has pointed out, Anti-Israel activists have exploited U.S. racial tensions and used the Black Lives Matter movement and black student groups to their own ends:

…there has been a multi-year effort by left-wing and Islamist anti-Israel, anti-Zionist, and openly anti-Semitic activists to hijack racial tensions in the United States and redirect that anger towards Israel.

That effort has been on overdrive since the shooting of Michael Brown in Ferguson and is accomplished through a combination of false and misleading statements regarding the militarization of domestic U.S. police departments and U.S. police training in Israel.

The intellectual rubric is “intersectionality,” by which anti-Israel activists try to forge links with minority (particularly black) activists by holding out Israel as the key link to oppression around the globe.

This Lower-than-Vichy administration at Santa Cruz should all be unemployed if not hanged.

White guilt, at least on the part of progressives, continues to divide the races and “keep the black man down.” Either they don’t have a clue, they don’t care, or both. I vote for both.

So, these black students favor segregation and mistreatment of groups not their own. History shows these are really, really bad ideas.

No parent who cares about their child’s future should allow them to go to any University of California school. And by “allow” I mean refuse to cosign the loans if they are going to one of those schools. If the kid wants to try to work their way through and fund it themselves, the character building part of that exercise may well counter what they will be taught there.

Maybe they will change the demand and paint the building to resemble a Birmingham bus.

This is the only appropriate response to these whiney snewflakes.

Inconceivable that those supposedly “in charge” of an entire campus cave to small group because they tantrum. This is certainly a bad precedent leading to more and more such instances. When are the mature grown ups going to use common sense and make rational decisions? Gave in to every demand? Nuts!