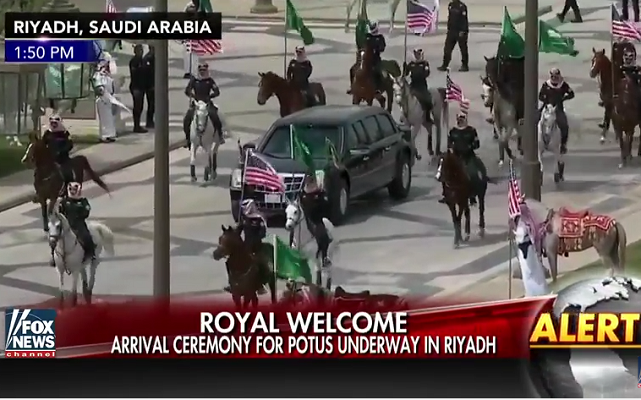 President Donald Trump, in the first stop of his maiden trip abroad, received a regal welcome Saturday in Saudi Arabia, feted by the wealthy kingdom as he aims to forge strong alliances to combat terrorism while pushing past the multiple controversies threatening to engulf his young administration.

On one day, Trump appeared successful in keeping his domestic woes an ocean away, as he basked in the pageantry that began with an elaborate airport welcome ceremony punctuated by a military flyover and a handshake from Saudi King Salman.

Fox News reports that the city of Riyadh is elaborately decorated with American flags alongside Saudi ones, images of President Trump and King Salman, and the motto “Together we prevail.”

Saudi Arabia offered Trump the elaborate welcome ahead of his two-day stay. Billboards featuring images of Trump and the king dotted the highways of Riyadh, emblazoned with the motto “Together we prevail.”

Trump’s luxury hotel was bathed in red, white and blue lights and, at times, an image of the president’s face.

I’m not seeing any weapons on those guards in the background. Good.

What wonderful “pomp and circumstance!” And those horses are simply spectacular!!!