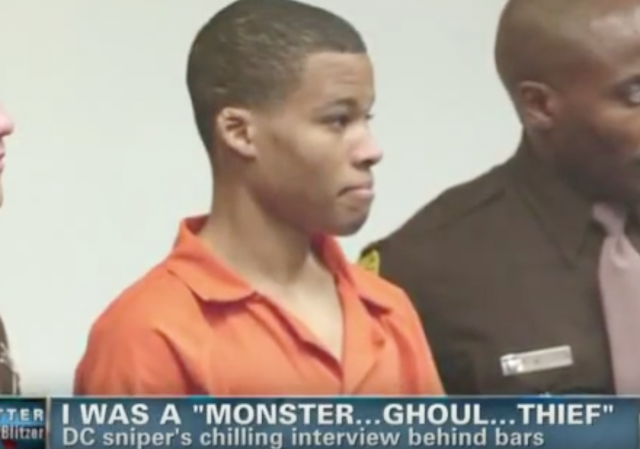 A ruling released by a federal court Friday overturned the two life sentences of DC Sniper Lee Boyd Malvo. Malvo was one of two shooters who killed ten people and injured three others in October of 2002. The sniper-style attacks had the entire District of Columbia on edge for three weeks until the shooters were apprehended.

Malvo appealed his life sentences on the premise that he was seventeen-years-old at the time of the murders, making him a minor exempt from a life sentence (based on Miller v. Alabama).

The other shooter, John Allen Muhammad, was executed for his crimes in 2009.

The decision in the Supreme Court case ruled juveniles are constitutionally different from adults for the purposes of sentencing “because juveniles have diminished culpability and greater prospects for reform,” which makes them “less deserving of the most severe punishments.” Judge Raymond Jackson agreed and made his ruling to vacate Malvo’s sentence.

Malvo was convicted in one trial in Virginia and entered an Alford plea in another. He had previously filed two motions for writs of habeas corpus that failed.

Now, Malvo’s case has been remanded back to Spotsylvania County Circuit Court to issue a new sentence.

In an interview with the Washington Post a few years back, Malvo said, “I mean, I was a monster. If you look up the definition, I mean, that’s what a monster is. I was a ghoul. I was a thief. I stole peoples’ lives.”

Malvo claimed a long history of sexual abuse, starting at the age of six and also said the other shooter, John Allen Mohammad sexually abused him for years:

In the decision, the court found Malvo had not been made fully aware he was waiving his Eighth Amendment rights to a sentencing hearing: 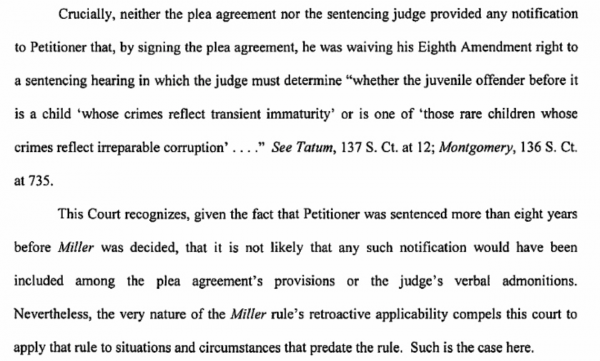 The court concluded that while the convictions would stand, the life sentences would be tossed out, and Malvo would be resentenced.

My first year in law school I clerked for an attorney who defended murder suspects. (N.B. criminal law is not a field I wanted to enter but this job and others were necessary to pay for tuition, and the basic necessities of roach infested apartments and a can of beans for dinner.)

Back on point, I will never forget what he told me about defending murder suspect clients. Invariably, he said, the first thing they say is don’t let them give me the “chair.”

One of the first home-grown terrorists and a US district court weakens us further.

Ghoul and thief? Malvo, you’re letting yourself off easy. You were a mass murderer – as vile as any terrorist.

You’re also a lying sack of excrement – as transparent as that other sociopath, hillary clinton:

“The “real plan,” as told by Lee Boyd Malvo:”
In Muhammad’s May 2006 trial in Montgomery County, Maryland, Malvo took the stand and confessed to a more detailed version of the pair’s plans. Malvo, after extensive counseling, admitted that he had been lying in the statement he made after his arrest when he had admitted to being the triggerman for every shooting. Malvo claimed that he had said this in order to protect Muhammad from the death penalty, because it was more difficult to achieve the death penalty for a minor. Malvo stated, “I’m not proud of myself. I’m just trying to make amends”, expressing his regret in the shootings.[18] In his two days of testimony, Malvo outlined detailed aspects of all the shootings.

Part of his testimony concerned Muhammad’s complete, multiphase plan. His plan consisted of three phases in the Washington, D.C. and Baltimore metro areas. Phase One consisted of meticulously planning, mapping, and practicing their locations around the D.C. area. This way after each shooting they would be able to quickly leave the area on a predetermined path, and move on to the next location. Muhammad’s goal in Phase One was to kill six white people a day for 30 days. Malvo went on to describe how Phase One did not go as planned due to heavy traffic and the lack of a clear shot and/or getaway at different locations.[19][20][21][22]

Phase Two was meant to take place in Baltimore. Malvo described how this phase was close to being implemented, but never was carried out. Phase Two was intended to begin by killing a pregnant woman by shooting her in the stomach. The next step would have been to shoot and kill a Baltimore police officer. At the officer’s funeral, they would plant several improvised explosive devices. These explosives were intended to kill a large number of police, since many police would attend another officer’s funeral. More bombs were then to be detonated as ambulances arrived at the scene.[23]

The last phase was to take place very shortly after, if not during, Phase Two. The third phase was to extort several million dollars from the U.S. government. This money would be used to finance a larger plan: to travel north into Canada and recruit other effectively orphaned boys to use weapons and stealth, and send them out to commit shootings across the country.[19][20][21][22]

It is so easy to forget the victims, especially when they are in a graveyard instead of the court.

The judge should use this case as precedent:

So, two sentences of life and day, served consecutively.

In determining whether Morris’ original 65 year sentence was Constitutional, the court re-weighed whether Morris’ vicious rape and mutilation of 16 year old Queena Vuong, was, among other things, a’youthful indiscretion.’

The court threw out his 65 year sentence, and sentenced him to life. (That worked out quite well for society, though capital punishment would have worked out better.)

Morris’ mother: “My son is not capable of doing that,” she said.” (More like: “Who ME produce a freak like that?!”)

And grandma? (No, not McConnell, a different granny): “That’s not Kenny, anybody will tell you that,” said Lucina Stevens, Morris’ grandmother. “He didn’t do it,” she said. “He would not hurt no girl.” Wonder what granny has to say about Morris’ mother: she was charged with theft and fraudulent use of credit cards in the 1990s for which she was sentenced to community control. In February, she was sentenced to a year of probation for contributing to the delinquency of a child, reduced from an original charge of child abuse. (Granny would probably, say, “She would not hurt no boy.”

Morris was arrested three times between 2004 and 2005 on charges of cruelty to animals. His mother herself got out of jail about an hour before the crime he committed:
http://www.tampabay.com/news/publicsafety/crime/teen-accused-of-rapes-is-innocent-emotional-mother-says/499192

he’s an adult now: sentence him to death.

alternatively, 25 years for each victim, served consecutively, with no time off for good behavior.

this POS should have been worm food years ago.

As a District Attorney let me give a little background to this decision, as we are also dealing with numerous defendants coming back for resentencing for the same issue, some of which were convicted over 20 years ago. The US Supreme Court held in Miller v. Alabama that it is a violation of the 8th Amendment for defendants under 18 to receive an automatic life without parole sentence without the sentencing judge being able to consider factors relating to them being juveniles and having the option of life with parole or any other lesser sentence. Most states up until that point had an automatic life without parole sentence for anyone convicted of first degree murder. As a result of that decision EVERY person in the country who was under 18 when they committed the crime and received​ an automatic life without parole sentence is having their sentence vacated- there’s no discretion in that. Hence, the Federal District Court judge in this case had no ability to do anything but what he did.

That being said, these defendants can still receive the same sentence on resentencing. It just can’t be the only option the resentencing judge has. He or she has to have the ability to consider the defendant’s maturity, mental capacity, etc., but if after considering those factors he or she feels life without parole is appropriate he or she can impose that sentence at resentencing​.

I have no legal expertise at all, and I’ve never even read the Miller or Montgomery supreme court decisions.

But I read this district court decision from start to finish. Unless the court completely misrepresented Miller and Montgomery, I must agree with Ted Bell. The district court had no choice; the case has to be sent back to the trial court for resentencing.

Thanks for the analysis. For a high profile case like that it would have been inconceivable for the district attorney to make an error in terms of charging him as an adult, so clearly something did change in the interim. Hopefully the new sentence is comparable.

There was no error; he was correctly charged in criminal court rather than in juvenile court, and nobody is disputing that decision. But he wasn’t an adult, and no prosecutor’s or judge’s decision can make him have been one. And under current law it is unconstitutional to subject a minor to an automatic life sentence. Congress can’t change that, and certainly no court lower than the supreme court can change it. So there was no choice but to vacate this sentence.

The prosecution can ask for cert to take the whole issue back to the supreme court and ask it to reverse its previous decisions, but with the current court that’s not a good idea. If and when Ginsburg and Kennedy have been replaced, it might be worth doing.

Well, it’s a good thing the Courts have no backlogs of cases, so they’re free to devote time and effort to the silly stuff.

The main takeaway from the D.C. sniper case, for me, was the glee that the “it’s wrong to profile” media took in constantly pointing out that according to the typical profile these sniper cases were perpetrated by middle aged white men.

And in fact the profile was wrong, which is precisely why it’s wrong to put excessive trust in profiling. That doesn’t mean don’t do it, it means take it for what it is — an informed guess, not certain truth.

You could feel the oxygen being sucked out of the CNN newsroom that so wanted the story about the middle aged white man being the D.C. sniper to be true when it turned out the perps were John Allen MUHAMMAD and Lee Boyd Malvo.

Yes. But not just them. The police messed up by putting too much trust in the profile. These two were looked at and cleared just because they didn’t fit the profile, which is exactly the same as clearing a terrorism suspect because she’s not Moslem. There are some non-Moslem terrorists, and there are non-white serial killers. Just not a lot of them.