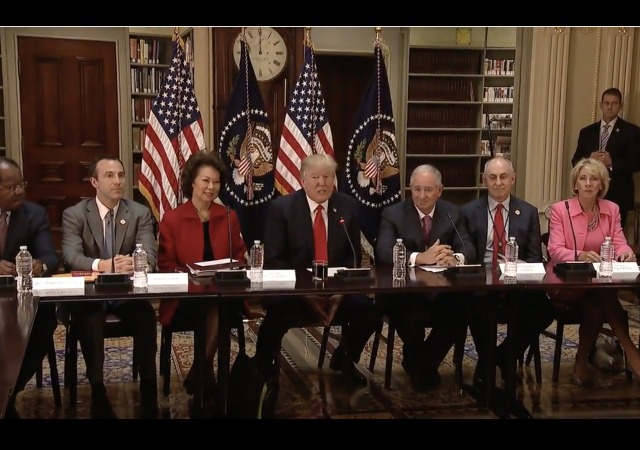 President Donald Trump met with CEOs along with five Cabinet members again today to discuss tax reform, NAFTA, and Dodd-Frank. He believes reforming all of those will help domestic businesses. Fox Business reported:

“At the top of our agenda is creating great high paying jobs for American workers … We’ve created over 600,000 jobs already … and it’s catching on,” the president told the press Tuesday, before adding Americans can expect “some pleasant surprises” regarding NAFTA.

As the president pushes for support for two of his major legislative items – repealing and replacing Obamacare and tax reform – he sought backing and input from twenty business leaders belonging to his “Strategy and Policy Forum” while Congress is away for Spring recess.

Trump did not offer any details on NAFTA, but he constantly criticized the trade pact while on the campaign trail.

Trump told the CEOs about “his efforts to boost job creation.” He mentioned some “tax proposals by saying he would reduce taxes.”

Tax reform remains a hot issue. Yesterday, White House aides leaked that Trump decided to scrap the tax plan he campaigned on and start something new as a way to draw more Republican and possibly some Democrat support. But much like with his NAFTA plans, Trump and his administration have kept tax reform proposals under wraps.

Trump also talked about his environmental policy and cuts in regulations “has already freed up companies to step up production.” One city in Virginia has already felt positive changes for its coal industry due to rollbacks.

When it came to Dodd-Frank, Trump insisted the administration will focus on the regulation. However, he stated that officials will be “keeping some obviously, but getting rid of many.”

Trump vowed to eliminate the Dodd-Frank regulations when he campaigned, but roadblocks have appeared. Republicans in Congress have also stopped trying to trash the law and instead “have pushed for significant changes to how the government monitors major banks for financial risk.”

Last month I blogged that Trump’s promises to overhaul tax codes along with positive sale outlooks have U.S. CEOs optimistic.

The Business Roundtable conducted its CEO Economic Outlook Index, “a measure of expectations for revenue, capital spending and employment,” found that the optimism jumped to 93.3. That’s a jump of 19.1 points and the most since 2009.

It’s a start. But the millionaires in Congress have to get on board or this is all kabuki theater. I say millionaires just to highlight that for most in the elected class the road to wealth is paved by serving more than just the interests of their voters. In fact, those interests only put a small portion of cash in the bank. The bulk comes from other interests who may have a different outlook on tax reform. (No, I don’t think corporations are evil greedmongers like Bernie or Warren.)

I’ll believe any of that when I see REPEAL.