Scarborough: “it’s also very confusing because he does it in Russian” 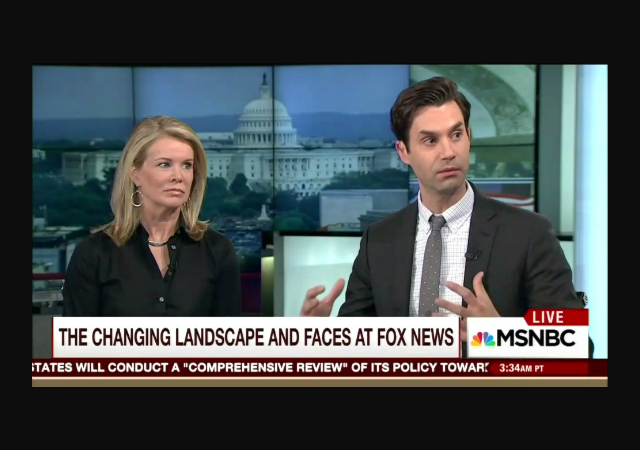 During today’s Morning Joe discussion of the ouster of Bill O’Reilly at Fox News, Joe Scarborough asked, “Do they remake over the entire network? Is anybody else in the [Murdoch] family’s crosshairs right now?”

Replied New York Times reporter Jeremy Peters: “I think you have to look at somebody like Sean Hannity, and question whether or not his almost propaganda-like attitude and programming every night is going to be acceptable in the minds of the family, which is clearly trying to shift the network in a different direction.”

Quipped Scarborough: “it’s also very confusing because he does it in Russian.” Note: that’s a variation on a line from years ago about Pat Buchanan delivering his remarks in German.

So Hannity could be on the hot seat because of his “propaganda-like attitude and programming every night.” Hannity might be a reliable voice of the Republican/Trump line. But are the primetime MSNBC anchors any less devoted to pushing the Dem/liberal talking points of the day? Should they be in their network’s “crosshairs?”

Note: later in the show, Mike Barnicle claimed that many women at Fox were “basically confronted with like a Bill Cosby on cable.”

As per this Washington Post article, “about two-thirds of the allegations [against Cosby] involve drugging and follow a similar pattern, with Cosby allegedly offering the women pills or drinks and the women saying they wake up naked in bed with Cosby after blacking out.”

Contrary to Barnicle’s statement, there have not been such allegations of criminal conduct made against O’Reilly.

Sew the Wind. Reap the Whirlwind.

Getting rid of O’Reilly just unleashed Tucker Carlson. He is much more effective at delivering his message. Going up against Hannity could yield unexpected results.

That reporter is dreaming. Wishful thinking in hopes of getting that issue back into the conversation. Hannity may have been skating on thin ice last year by going all in on Trump but with Trump winning in a landslide, his job at Fox is solid.

Besides, for us conservatives, Tucker Carlson is an improvement over O’Reilly. And it is more likely that they will move Hannity to the 9pm slot to solidify that audience. I expect that “The Five” will fizzle out at that time slot.

The key might be who they put in the lead up slot before Carlson. They seem to be leaning Perino (yikes) because of political correctness or something. But they need to keep Hannity. You can’t clear the decks and expect that you won’t be starting from scratch to build a new audience.

Perino is horrible. TV is not her strength and I don’t care about her dog. She’s not the only person that loves her dog.

CNN Anchor: ‘Many Think That If There Was No Bill O’Reilly, There Would Be No President Donald Trump’
http://www.cnsnews.com/news/article/susan-jones/cnn-anchor-many-think-if-there-was-no-bill-oreilly-there-would-be-no

I’m not here to defend Fox News, nor O’Reilly, but seriously, these people on MJ are ridiculous! Pardon my vulgarity, but anytime I tune in I feel like I’m watching a jerk in the form of a circle.

Hannity is a purely partisan show. No duh. Most of Fox News is light right. All of MSNBC is light to extreme left. Insanity is challenged on Fox. It is assumed normal on MSNBC.

Fox also puts more effort into getting things, although no outlet is perfect. But the contrast with CNN is eye opening. That outfit has become more like a tabloid than a news organization.

I haven’t been able to watch Hannity for years, since his shows remind me of a cross between big-time wrassling and a food fight, but that has nothing to do with whether he will stay or go. If he has kept his personal life straight and not done a bunch of stupid stuff, then he will stay. If he hasn’t, then he should go. (too many of O’Reilly’s former friends and allies turned on him for me to think it was all a left wing plot)

The left hates Mike Pence for publicly having such a strict personal moral code, but I believe they’re mad just because they know that he’s shut down their favorite avenue of attack, and they don’t know what to do about it.

Hypocrisy is thick at MSNBC. What a joke, “So Hannity could be on the hot seat because of his “propaganda-like attitude and programming every night.” If that were true, then all of MSNBC should be on the ‘hot seat.’ Fake news and propaganda is their only product

Just school boy dreaming. The anti-Foxers have gotten their first taste of “carnal knowledge” and can’t stop thinking about it and dreaming up the next scenario.

I know that no one here is likely to believe me, but I think that when the smoke finally clears, there won’t be anything with Cosby either. Years ago, my wife dealt with a lot of famous stars, and most of the guys were slimebags, hitting on her, etc. There were two exceptions: Cosby and Elvis. She visited them on multiple occasions in their suite, and was on a first name basis with the entire family. And, that latter was critical – Cosby was always completely about his wife and family. No sneaking behind her back, etc. Which, as I said, was so atypical of the rest of the men in his position.

I find it somewhat suspicious that all of the Cosby allegations seem to be so similar. Maybe coincidence. But, maybe a bit of copying going on.

Knowing Mike Barnicle’s past and his firing from the Boston Globe, he probably stole that line from a HuffPo writer. Why does this guy still have a job??!! Who is he to cast charges against ANY journalist?

Mr Barnicle, none of Cosby’s accusers were paid off, whether or not their accusations were truthful.

A New York Times & Taco Stand reporter accusing a Fox News personality of having a “propaganda-like attitude”? Is this seriously happening?

The MSM jealously guards its prerogatives. Only the Left is allowed to propagandize in the guise of news. It’s even worse if an enemy propagandist is popular.

I have a basic rule about these shows – if they start yelling over each other then I change channels. Sometimes, one person will allow the other to speak only to be interrupted within 10 words by the other person, repeating the same words at the top of their voice.

I think it would be better if the host has a cut-off button and uses it. I record the basic shows, so I can fast forward and I don’t feel like I have wasted an hour or so.

The best part of Tucker’s show is watching his expressions – he lets you know how he feels while letting the other person continue making stupid remarks.

A good o’le progressive baby hunt. Prepare the barbie. Pull the scalpels. There’s going to be… another baby trial.

“The best part of Tucker’s show is watching his expressions – he lets you know how he feels while letting the other person continue making stupid remarks.”

How long will Tucker’s show last?

Carlson’s show in it’s present form will last until the libs stop appearing. This will happen when they realize that the longer they talk the stupider they look.

If James Murdoch wants to place his stamp on things and make Fox acceptable to his pals at Sky TV, then yeah Hannity is gone regardless of whatever rationale is given in the future.

amazing to read the number of comments whining about one or the other of the FOX anchors/personalities. So if you didn’t like BOR was there a problem with your TV off button? Based on the ratings he got before the effort to sink him apparently he brought in the best ratings. Even if you didn’t like his style – seems like many viewers did. Everyone isn’t interested in pappy Perino or libertarian Carlson. Tucker is the new fair haired boy but his “shocked” sctick is going to get old quickly. He’s sanctimonious just not as overbearing as BOR – more metro.

Seems like there should be room for different styles rather than all BHL progressives like MSNBC or boring platitude from CNN.

They will soon find a much reduced market by peddling drivel by drooling idiot liberals or bland bloodless BS by boring broads.

As usual Liberals infiltrate, abuse, loot, and then destroy. They have been wanting to destroy Fox News for a long time.