Russia now ahead of U.S. 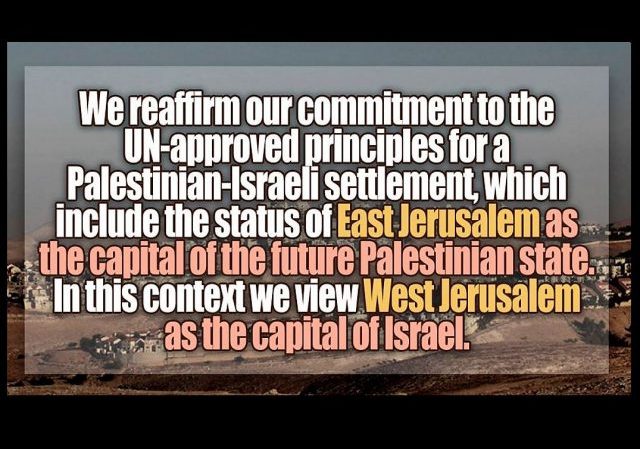 The United States does not recognize any part of Jerusalem as being Israel’s capital.

But Russia now does, though whether it’s a formal recognition or just a statement of policy remains unclear..

The announcement comes as US President Donald Trump’s administration is agonizing over whether to move its embassy from Tel Aviv to Jerusalem, a move that would constitute recognizing west Jerusalem as the country’s capital. No other country in the world recognizes any part of Jerusalem as Israel’s capital.

The statement issued by the Russian Foreign Ministry reads, “We reaffirm our commitment to the UN-approved principles for a Palestinian-Israeli settlement, which include the status of East Jerusalem as the capital of the future Palestinian state. At the same time, we must state that in this context we view West Jerusalem as the capital of Israel.”

This is a sharp shift in Russian policy, which until now has formally held that Jerusalem should eventually be under a permanent international regime. The statement appears in English on the Russian Foreign Ministry’s Russian web site.

While officials in Jerusalem interpreted this to mean that recognition of west Jerusalem as Israel’s capital will only come once east Jerusalem becomes the capital of a Palestinian state, The Jerusalem Post has learned that Moscow intends this recognition to go into effect immediately.

Such recognition doesn’t solve the problem of Jerusalem, because Israel views a united city as its capital. And to make the arbitrary distinction of West versus East pretends that the 1949 Armistice line, which expressly was not supposed to constitute a final border, becomes a final border.

Nonetheless, it is an important recognition. 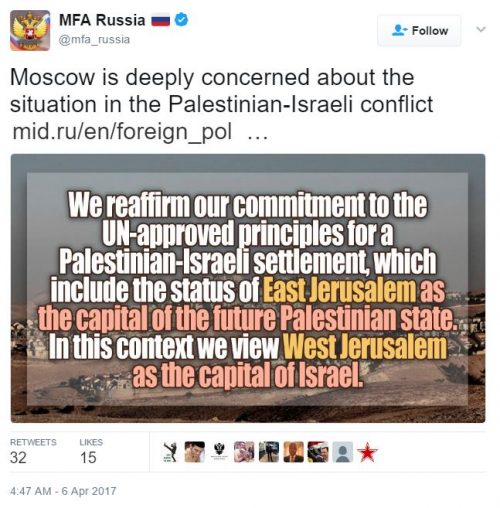 Let’s sent the Palestinians to Germany. I’m sure Merkel would welcome them.

Now that the US is calling out Russia for propping up Assad and his use of chemical weapons, they have to look good in the international spotlight. Consider the time, it’s no coincidence. On the same day that the world is looking at Syria’s crimes and Russia’s complicitness, they announce support for Israel…

Is this a symbolic gesture by Russia to signal that they want better relations with the US and the West?