Halperin on Bannon: One of Few in White House “Who is Creative, Innovative, Takes Risks”

Halperin on Bannon: One of Few in White House “Who is Creative, Innovative, Takes Risks” 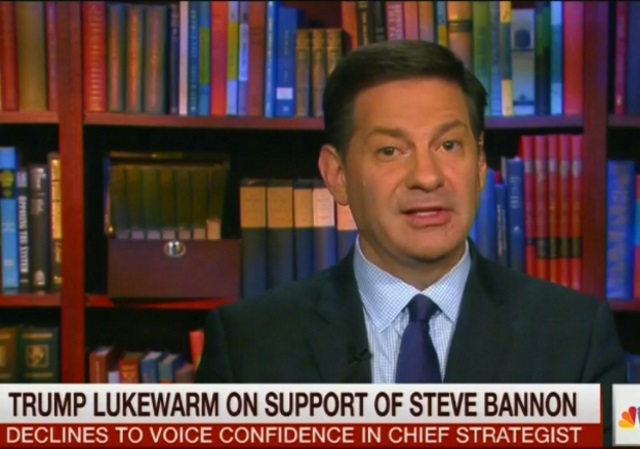 Morning Joe has been on a Steve Bannon-bashing spree the last couple of days, with various panel members predicting his departure from the White House. As Mika Brzezinski put it yesterday, “the end is nigh” for Bannon.

But Mark Halperin made a strong case for Bannon on today’s show, saying that being conventional is not what got Donald Trump elected, and that “Bannon is one of the few people in the White House and in Trump’s life who is creative, who’s innovative, who takes risks, who advocates taking risks. Someone has to be for that.”

This Insurrectionist has found that for some time now, rather than running with the pack mentality, Halperin has demonstrated an ability to maintain an independent perspective on events. Watch for him. He’s not aggressive or flashy, but will often offer a counterpoint to the conventional wisdom of the day.

Halperin’s comments came after Joe Scarborough depicted Ivanka, Jared Kushner, Gary Cohn and Dina Powell as being in the ascendancy within the White House, at the expense of Bannon.

MARK HALPERIN: The establishment and the press in Washington would like a conventional administration. They like when he does things with NATO. They like when he works with Congress in a more traditional way. That is not the essence of what got Trump elected, and so, they need to put together a team, whether it’s with the current people or with some new people, that does those two things simultaneously. Harness what makes Donald Trump a potent political force but also deal with the realities of working with Congress, getting things through the courts. And Bannon is one of the few people in the White House and in Trump’s life who is creative, who’s innovative, who takes risks, who advocates taking risks. Someone has to be for that. And that other group within the White House is a more traditional, more conventional group of thinkers.”

So far, the Soros people have taken out Mike Flynn and K. T. McFarland and are in the process of taking out O’Reilly and Fox News, in general. Bannon is the next target and Stephen Miller will be right behind him. Spicer is another target. They, in concert with the Republican establishment, are fostering a collaboration between Paul Ryan’s globalist point of view and Trump, influenced by Kushner and Cohn. This will not end well……

Kushner is a lovely young man, coiffed and manicured to a t, but he’s a Democrat at heart, and he doesn’t have the experience in the real world that his father-in-law does. Kushner and Cohn are not going to do the things that got Trump elected. Let Jared focus on what he does do best- technology, Israel and millennial “outreach,” but NOT at the expense of Trump’s MAGA agenda. I suspect that Kushner simply is too young and callow to understand the very REAL concerns of the American public. He doesn’t “get” what many of us older folks do, that the Silicon Valley billionaires weren’t so terribly smart, but that many just got lucky and now think of themselves as “visionary” to justify their being in the right place at the right time.

President Trump, listen to Jared and Cohn, but fit their advice into what you know in your gut- the agenda you ran on.

I am growing so weary with all of these talking heads espousing their opinions for all of us to suck up, over and over and over again. Enough already! Can we please just get back to the business of living, and praying that our country will in fact get back to what made it great to begin with?

Trump benefits having Bannon around. Halperin is way smarter btw than Scarborough

“If we are all thinking the same way, then someone is not thinking.”

“And Bannon is one of the few people in the White House and in Trump’s life who is creative, who’s innovative, who takes risks, who advocates taking risks.”

You could say the same things about Woodrow Wilson and Huey P. Long.

That’s not necessarily a good thing.

So in other words Bannon is more thoughtful than the reflexive career politicians and lifelong hangeron’ers? I’m shocked…….