“here are our words: there is no evidence of any wrongdoing” 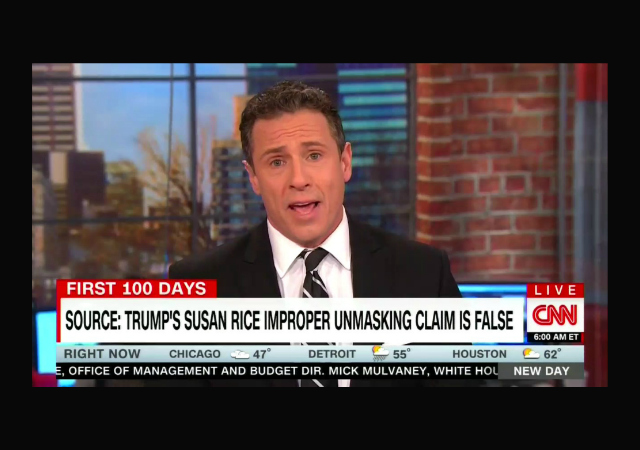 Move over, Democrats. There’s a new opposition party in town. And its name is CNN.

Opening his show this morning with a discussion of the emerging controversy over the unmasking of the names of Trump associates in intelligence intercepts, Chris Cuomo said, “so President Trump wants you to believe that he is the victim of a ‘crooked scheme.’ Those are his words. And here are our words: there is no evidence of any wrongdoing.”

So it’s Trump’s words vs. “our words.” As if Trump and CNN are two opposing political movements.

Which they evidently are. Cuomo then blithely dismissed the entire matter as a “fake scandal being peddled by right-wing media.”

It is particularly absurd to so quickly dismiss a controversy when the people at the center of it are the highly-politicized Susan “the video did it” Rice, and her deputy, Ben Rhodes.

Note: you have to view the video to hear how Cuomo bites off each word of “there is no evidence of any wrongdoing.” CNN really, really wants you to ignore this story.

Note segundo: check out the chyron in the screencap. CNN helpfully informs viewers that the allegations of wrongdoing are “false.”

CHRIS CUOMO: So President Trump wants you to believe that he is the victim of a ‘crooked scheme.’ Those are his words. And here are our words: there is no evidence of any wrongdoing. And in fact, if anything the NSA asking for identities was a reflection of exactly how much traffic there was involving Trump people and foreign players. The White House blasting the press for not reporting on another fake scandal being peddled by right-wing media.

Did Joe Scarborough have Chris Cuomo in mind when he ripped the “hallelujah chorus” that is dismissing the controversy over Susan Rice’s unmasking of the names of Trump associates caught up in intelligence intercepts?

Whereas Cuomo blithely dismissed the matter as a “fake scandal being peddled by right-wing media,” Scarborough took Rice’s actions much more seriously on today’s Morning Joe.

After reading from a Bloomberg story reporting that the intercepts unmasked by Rice contained valuable “political” information on the incoming Trump administration, Scarborough posed  this killer question: “what if Dick Cheney had asked for the unmasking of names for Barack Obama’s incoming administration?”

JOE SCARBOROUGH: Mark Halperin, this Bloomberg report says that one official familiar with reports say they contained valuable political information, not Intel, but valuable political information on what the Trump transition team was doing, including who Trump was meeting, who the Trump team was meeting, what the views were of Trump associates on foreign policy matters and plans for the incoming administration. I don’t understand —

MARK HALPERIN: If that report is accurate, it begs a lot of questions about what was going on. And people who want to dismiss it as routine I think are uncurious.

JOE: Well, what if Dick Cheney had asked for the unmasking of names for Barack Obama’s incoming administration? I mean, it’s a very simple question to ask the next time anybody says this is much ado about nothing.

Again, we don’t — there are a lot of things we don’t know, a lot of questions we don’t know. I do know this, though, I heard the hallelujah chorus come immediately on queue last night saying, and Richard [Haass] is laughing because he saw it too: nothing to see here, move along, move along. Let’s just replace Susan Rice’s name with Dick Cheney’s name, the incoming Trump administration’s name with the incoming Obama administration’s name and then Willie, let’s go from there.

And here are our words: there is no evidence of any wrongdoing.

“Because the only good evidence is what we manufacture.”

And, next week we move to this Meme.

“What I meant to say was there is plenty of Evidence but there is no intent.”

Cuomo *is* the guy who says “hate speech” isn’t protected and we should just let him tell us whats in the Wikileaks releases becuase he’s more “qualified”, so….

Evidence of wrongdoing? Since when did that become a concern of the Democrat party and CNN (pardon the redundancy)? Where is the evidence of wrongdoing with regard to the so called “Russian collusion scandal?” Now, if evidence of wrongdoing is a prerequisite, they have plenty of that with the Hillary unsecured server issue (and actual Russian collusion: see Clitnon Cash). I have yet to find a single Democrat, liberal, socialist, Communist (again, apologies for the redundancies) that can reconcile what Comey said with the actual statute. Not one. Doubtless, CNN can muster up one, probably Cuomo.

Cuomo getting hysterical just tells me that this rabbit hole goes deep.

Too bad CNN doesn’t have any journalists on staff to look into this matter.

You can dispute the evidence. Call the sources (note: not anonymous ones this time) liars. Call the evidence circumstantial or call for us to suspend judgement until we hear more about the still-classified sources.

But just stating that there’s no evidence — blatant lie.

And he didn’t just do it on his own behalf — they are “our” words. He’s speaking for CNN.

(Also… in the transcript… it should be “on cue” not “on queue” — totally different thing.)

““what if Dick Cheney had asked for the unmasking of names for Barack Obama’s incoming administration?””

Well of COURSE that would be a scandal. Dick Cheney was evil which you can tell because a) he’s a Republican and b) He’s not a Democrat.

Really, why do you people have such a difficult time with facts?

Give Cuomo some credit here: It takes some level of skill to make a meaningless “news” source even less meaningless.

He’s one of those people who that it would be a real treat to watch him take a horizontal butt stroke.

As usual, the lack of ideas from these goofs is striking. For all the whining they’ve inspired, the effectiveness of Trump’s tweets is hard to dismiss—with little effort, he’s turned the tables on the Left, and put them on the defensive, and in the exact same place they’ve been trying to put him. To do this, it doesn’t matter if there’s anything factual behind Trump’s accusations (though I believe there is). He can fight fake news with fake news at least as well as CNN can. And CNN has no response prepared, beyond rote denial and Cuomo’s pitiful bleating.

They were spoiled by George Bush, who was basically a gentleman who wouldn’t get down into the D’rat’s home territory—the mud. But Trump seems to have no reservations about grabbing them by the p—y … and squeezing.

They have taken journalism to a whole new realm, there is a term for it, if memory serves, it is called FICTION. Their cable network should be purchased by Comedy Central, it would then be CCCNN, no one would notice. It would be right at home.

Wouldn’t that pull the comedy channel’s rating down?

Let’s see if I have this right so far (paraphrased)

Press: Trump conspired with the Russians to rig the election! We have transcripts of his phone calls!

Press: What transcripts? We don’t have any transcripts! But there’s still evidence of his evil conspiracy to sell the country to the Russians.

Nunes: You mean these log files showing Susan Rice arranging the release of Trump campaign members conversations with names to the press?

Press: We don’t see that! Nananaa! I can’t hear you! Russians!

Well that didn’t take long.
Chris and all the other DNC loyalists – I mean fair and impartial journalists – have received their marching orders:

If that doesn’t work, Joy Reid will toss the race card.

It really doesn’t surprise me the Obama administration did this; they’ve *always* treated their political opposition as if they were the “real” enemy.

Susan Rice: “I know nothing”

Rice source: “Nothing illegal here even tho she said she knew nothing”

CNN: “This is a Trump diversion”

Sgt Schultz wasn’t created until the 60’s, but I think he may have been based on my life in the late 50’s. Funny how it worked for him though.

This scandal is HUUUUGGGGEE. This is not a DUI of an elected official. This is not sex with an intern in the Oval Office by a sitting, married President. This is not a President’s attempt to cover-up a criminal act by private citizens working on his behalf. This a Presidential administration using the official assets of the US Government to, essentially, spy on private citizens engaged in legal behavior during a Presidential election campaign. And, it involves an extremely highly placed government official who is a close associate of the President. If Trump were Barack Obama and Obama was Bush, in this scenario, the press would be SCREAMING for Bush’s head. Instead, it is “Nothing to see here, move along”, from most of the media. While at the same time, the media has convicted trump of colluding with the Russian government to gain an advantage in the recent election, with NO evidence at all of such collusion or even suspicious contact.

Thank you Dem/Lib/Prog/Media coalition. There are less painful ways to commit political suicide.

The media: moving deeper into irrelevancy one day at a time.

There is a new meme rising to the surface and it is that the entire Russian involvement with the Trump campaign is a made up story due to the many recordings of private conversations Rice read of Trump and his associates talking about the campaign and other business matters. Since there was no evidence of any wrong doing they simply made it a “Smoke and fire” issue knowing that the msm would ALWAYS say that there is a fire here somewhere. This is the same judgment that Rhodes and Rice used on the Benghazi video lie and look how well that went for them. What this tells us about the obama regime is that they were totally without ethics or morals. The ends justifies the means. We can only imagine if hillary had won and these policies had not only been continued but enhanced and we know they would have!

Some commentators have called this a “scandal” and, in a normal world, it would be. A big one. But times have changed.

For a scandal to exist, there are two elements that must be present, first the questionable act or acts and secondly reporting to the public of the act(s). Of the two, the more crucial to scandal creation is, I believe, the second.

And so, in this case, there will be no scandal just as there was none regarding Benghazi, the IRS, Hillary’s uranium sales to Russia, Obama’s pledge to Putin to be more flexible “post 2012 election” and many other Obama/Hillary/Democrat misdeeds.The media simply will not report it; those relying upon and trusting in the “mainstream media”will never know much of anything about this. Ergo, there will be no scandal. None. Zero. Nada.

Indeed, as I indicated above, a scandal can be ginned-up out of nothing. There was no “there” there regarding Flynn but no matter. Relentless media coverage caused him to be run out of his position.

We may be doomed.

Drudge had a link up this morning about CNN’s Don Lemon telling CNN viewers to ignore the Susan Rice ‘fake news’ last night.

I know CNN’s Don Lemon and Chris Cuomo are just images on my TV screen but, still, I smell … fear.