Evidence suggests it dates back to the last ice age. 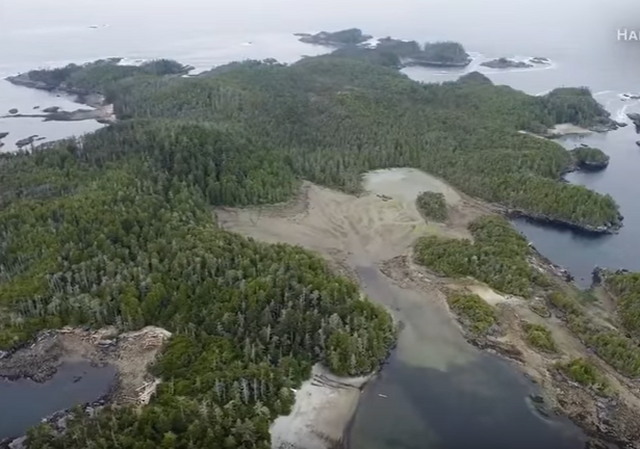 This is a fascinating story and kind of a fun break from politics. Researchers have discovered an ancient settlement off the west coast of Canada that is approximately 14,000 years old.

14,000-year-old village discovered in Canada one of oldest settlements ever found in North America

An ancient village believed to be one of the oldest human settlements ever found in North America has been discovered during an excavation on a remote island in British Columbia.

The village, which is estimated to be 14,000 years old, has been found on a rocky spit on Triquet Island, about 500 kilometres northwest of Victoria, Canada.

It is estimated the village is older than Egypt’s pyramids.

Scientists said the artefacts being unearthed, which include tools for lighting fires, fish hooks and spears dating back to the Ice Age, are painting a picture of how civilisation began in North America, CTV Vancouver Island News reports.

Alisha Gauvreau, an anthropology PhD student at the University of Victoria and a researcher at the Hakai Institute, which supports the archaeological team, took part in the excavation work.

She told the Canadian television network: “I remember when we get the dates back and we just kind of sat there going, holy moly, this is old.

This short video from CNN has more:

Adding another interesting aside to the story, the Heiltsuk tribe which has lived in the region for thousands of years says this discovery matches their oral history.

An ancient archeological find on Triquet Island on B.C.’s Central Coast is adding credence to the oral histories of the Heiltsuk Nation.

“Heiltsuk oral history talks of a strip of land in that area where the excavation took place. It was a place that never froze during the ice age and it was a place where our ancestors flocked to for survival,” said William Housty, a member of Heiltsuk Nation.

B.C. archaeologists have excavated a settlement in the area — in traditional Heiltsuk Nation territory — and dated it to 14,000 years ago, during the last ice age where glaciers covered much of North America.

“This find is very important because it reaffirms a lot of the history that our people have been talking about for thousands of years,” Housty said.

The world is an amazing place.

“Delicate stone arrowheads and tools and a wide variety of marine and bird skeletons unearthed on the Channel Islands off the coast of California provide strong evidence that North America was settled by two separate groups of immigrants some 13,000 years ago, one that came overland from Asia and a second group of maritime explorers who sailed along the coast.

Archaeologists generally agree that one group of hunters migrated from northern Asia across the land bridge that connected Asia and North America through the region known as Beringia, slaughtering large mammals with spears and arrows fitted with characteristic stone tips known as Clovis points.

But a slowly growing body of evidence hints that a separate group of people, who originated perhaps in Japan, sailed along the coasts of both continents, traveling as far south as Tierra del Fuego and migrating as far inland as the glacial lakes of the Pacific Northwest…”

Meanwhile – Pre-Clovis sites on the East Coast are evidence that someone came over from Europe at least 15,000 years ago. This suggests there were white people in America before the “Native Americans” got here.

“White” is probably not the most useful term. They were most likely North African.

I don’t know about the rest of you. But I’m Italian. At certain points in the duration of the empire 25% of the population consisted of slaves working the latifundia.

And I’m OK with that because that makes me an American.

Race, unlike biology, is a social construct.

Caucasoid maybe would be a better description. Cro-Magnon, — probably better yet.

Yeah, there is a fierce battle against any study of pre-Clovis inhabitants of both North & South America. It is politically incorrect to speak of any of the archaeological or DNA evidence that points out that the current indigenous people of the Americas were not the first nations but in fact usurpers.

True. For lack of a better term the early Americans may have been the Solutreans.

Funny thing about Kennewick Man is that the depiction of his likely image resembles that of Jean-Luc Picard(Patrick Stewart).

And how adaptable human beings really are. Humans can adapt to, and survive, a lot of challenges…including an ice age.

Yeah, we’ll make it through winter, but not before I beat a few people up.

Reading about this find reminds me of the video I once saw explaining the evolution of the human race. They showed a large glass jug full of jelly beans being poured out of the narrow neck of the jug. Then they stopped the flow and concluded that the small amount of variety of human species was like a few jelly beans that came through the neck. Most of the earlier humans were killed off either through sickness, combat, or extreme weather events. What is left is what we see today although other species died off after the neck of the jug events such as the Neanderthal. It is exciting to think that there are still undiscovered ancestors waiting to be found.

For the past 3-4 years, the topic of ice age civilizations has fascinated me. There has been a growing scientific/archeological re-examination of generally-accepted geological history going on based on the abundance of evidence challenging the status quo.

I don’t know what is true but there are two key questions that this discovery may shed light on is. One, when did the Ice Age really end? The evidence is increasingly suggesting that it more likely ended 6,000 years ago rather than 12,000. Two, the status quo scientific assumption is that geological change occurred gradually (gradualism) when there is ample evidence making it clear that geological catastrophes occur quite frequently.

Both of those are relevant in this case because this settlement is being dated 14,000 years ago placing it firmly in either theory of the Ice Age. It also brings into question whether the climate could have been so different from the rest of the northern continent. Maybe that part of the continent was further south at the time?

What triggered my latest interest in this (I’ve had questions since I was a boy) was my interest in understanding how the ancient Phoenicians and Egyptians could possibly have calculated the circumference of the earth so accurately. The answer is so simple. The basic geometry that can be demonstrated with a compass and ruler.

The question being answered related to navigation and made it very likely that ancients sailed the seven seas long before Magellan and with better “technology”. The Polynesians used to sail 6,000 miles across the Pacific to Rapa Nui. Ancient Egyptian ships were found at the mouth of the Amazon river. There were tools dated to 45-80,000 years ago found in Mexico in the 1950s. And there is the omnipresent “biblical flood myth” found in the oral creation myths of every culture on earth.

Clearly, we really don’t know as much about the past as we like to believe. And no, spare me the “ancient astronaut theory” nonsense. Those people are nuts.

I’m also fascinated by that time, and by the great creatures that used to roam the North American plains. Hard to imagine that geologically, it was just a few blinks ago that we had great herds of Mammoths roaming all across what is now the USA.

I believe the end of the Ice Age is usually dated to about 12,000 years before present, because that’s when the glaciers turned around and began a permanent decline, and also about the time the great Megafauna extinctions occurred. But, I recently saw a program with good evidence that the English Channel wasn’t completely created until about 7,000 years ago. (ie, when the dimly remembered “Doggerland” vanished beneath the waves forever)

I also am partial to the claim (although the evidence is inconclusive) that the Sphinx is actually about 10,000 – 12,000 years old, probably originally with the head of a lion, and only later did the Pharaohs build their capitol in its shadow, and then re-carved the head to represent themselves. Anyone can look at it and note that, for sculptors who were so good, the head is very obviously too small and out of proportion to the rest of the monument. This theory offers an explanation as to why that was necessary, and also offers an explanation as to why the base appears to show weathering from an amount of rainfall that hasn’t happened on that plateau for about 10,000 years.

You may find this book interesting if you are interested in the natural history of North America.

“Join Professor Valerius Geist and photography Michael Francis as they salute the pronghorn antelope, the little brother of the American bison. This swift, smart, beautiful animal is the last survivor of North America’s original large mammals. Val Geist of Calgary tells the fascinating story of the pronghorn, which has preserved through harsh and constant threats..”

I know nothing of the others, but Polynesian navigators had no “technology” at all; they closely observed the rising and setting of certain stars, patterns of wind and swell, and animal behavior.

And the swaying of their testicles. Look it up.

“”A man’s testicles might not seem like something to be used for navigation, but they were and are in native Oceania…

Apparently, they had developed a very good sense of direction of the generations and knew how to orient themselves based on what they and their ancestors learned about a lot of things including prevailing wind and ocean currents. They would start off by riding a monsoon. Like most of the ancients, from what I have read, they judged distances by how long it takes to get there rather than by standard distance measurements.

The 15th century European explorers marveled at their unique internal sense of direction. Wrong. They just had better knowledge and more experience in using their navigation skills. It was utterly impossible for the Europeans to even consider that maybe those “savages” were actually superior navigators. That’s a constant problem when reading history, those who write it automatically assume that they are superior to earlier peoples. I guess it depends on how you define “superior”. Today, we flatter ourselves with our “superior” technology. Maybe in the past it was more spiritual.

I’ll give the Polynesians sailors their due, but if they were better navigators than the Europeans, how is it that Europeans sailed to them before they sailed to Europe?

Enjoy if you are so inclined.

I love ancient and old traditions and oral histories. Especially those that are made up as you go along. That way they can be much more contemporary.

As the inventor of the Pyramids, Al Gore does not appreciate being one-upped by this settlement.

They withheld from the news release is how they also discovered evidence as to why this village died out. It seems that so many left because of overregulation and too high taxes the village just wasted away. It appears that those who left migrated to an area now known today as Southern California.