Want to Work? ‘Dirty Jobs’ Star Mike Rowe Has a Scholarship for You

Want to Work? ‘Dirty Jobs’ Star Mike Rowe Has a Scholarship for You

“If you want to weld, you’re going to work.” 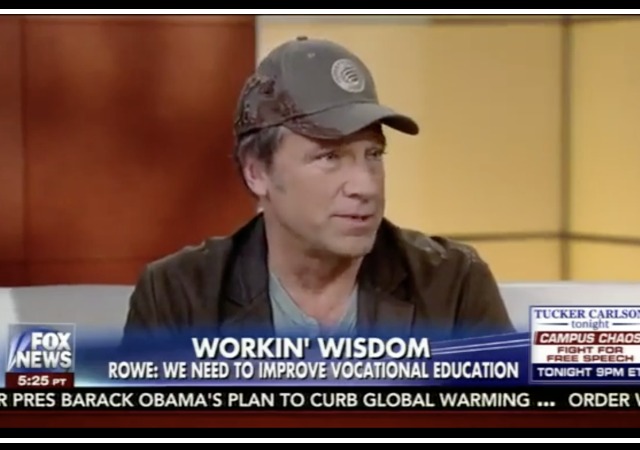 Who doesn’t love Mike Rowe?! The Dirty Jobs star has become well known for his videos that encourage people to learn a trade and get to work. For the fourth year in a row, he has launched a scholarship for those who want to learn a certain trade:

“Every year, we do a work ethic scholarship,” explained the 55-year-old on “Fox & Friends” Tuesday. “It’s not huge, but we set aside five or six hundred grand and we put it in a pile and we invite people who want to learn a skill that’s actually in demand to make a case for themselves [such as] an essay, video, references.”

Each applicant must sign the S.W.E.A.T. (Skill & Work Ethic Aren’t Taboo) pledge, which means the person cannot “become a lazy, self-entitled drone who blames others for their troubles and expects to be taken care of.”

Rowe reminds people that these jobs are already available:

“If you want to weld, you’re going to work,” he explained. “We’ve trained a lot of kids, many of whom are making north of six figures. Carpentry, the construction trades — they’re all in demand right now… if you can really operate a welding torch, and you’re willing to travel, you’re going to kill it.”

Rowe acknowledged these jobs may not be someone’s “dream job,” but they should still attempt the work because who knows? Maybe it’ll be a fit. If anything, at least a  new skill can be learned:

“If your whole model for job satisfaction is based on finding your ‘dream job,’ right – it’s a bit like going out in the world and looking for your soul mate,” he said. “It’s difficult. Find the thing that’s available, be great at it and then figure out how to love it […] You have to work. You have to own it.”

His thoughts reflect on a video for PragerU last June that said “follow your passion” is terrible advice. Of course, the left jumped on Rowe, who was busy giving people the truth they needed to hear:

“If we’re talking about your hobby, by all means, let your passion lead you,” he said. “But when it comes to making a living it’s easy to forget the dirty truth: Just because you’re passionate about something doesn’t mean you won’t suck at it. And just because you’ve earned a degree in your chosen field, it doesn’t mean you’re going to find your ‘dream job.’”

Rowe explained that many people chase after dreams and, as a result, have no chance of finding meaningful work or developing a genuine passion for the jobs they already have.

“Dream jobs are usually just that — dreams,” he said.

You can apply for the scholarship by May 19.

I grew up knowing I was going to college. Grew up in a college prep high school (one of the best public HS in the country – thanks Mom and Dad!). Went to college, got a degree, and work in my field still (over 30 years!). At the time – I thought EVERYONE should go to college. At the time – tuition was in the $4 to $12 per hour range.

Today, college is wrong for a lot. Garbage degrees that lead to nowhere jobs. Tuition is through the roof. I have come to realize college is a future value calculation. Do the homework – right degree, right school, right person, low or no debt – it makes sense.

Mike Rowe has shown a lot of valuable jobs, that can not be outsourced, decent money – for the willingness to work. Typically a four year head start over college, so earnings immediately. A lot to be learned listening to Mike Rowe.

I saw Mike during one of his speaking tour engagements promoting skilled trades. He offered the audience a well-honed and very entertaining presentation.

I view Mike as the anti-Michael Moore — a refreshing antidote of rational, thoughtful and common sense socioeconomic perspectives as compared to the latter’s sweaty, infantile, self-aggrandizing and buffoonish antics and histrionics.

My grandfather was a Georgia farm boy raised in the Depression, and when he was offered an opportunity, he reply was always “Yes, thank you very much”. I don’t have the space to tell you what this man accomplished in his lifetime, and even if I did, you’d think I was making it up. And yes, he did get his dream job and more, right about the time he turned 45.

But you know what, I do have to defend the millennials a little because nobody’s going to put themselves through college milking cows nowadays, given that college costs $50,000 a year and all the farms jobs are done by illegals. They really did get the rawest of deals.

“Willing to travel.” He sort of just threw those words in there, but they’re a big deal. The ones who willing to travel are the ones pulling the six-figure incomes, and it is for that reason that they get those wages.

The nomadic life, and never knowing where you’ll be next when your current project is complete, is not a life for everybody. I work in the international construction market, and turnover among new-hires is north of 60% during their first year; the divorce rate among the longer term folks is sky high. I expect that the domestic market is not much different.

A six-figure income sounds great but, believe me, you will earn it. Companies who pay that kind of money are not screwing around.

The problem is with those not willing to do what is necessary to earn a wage they’re demanding. If you can’t afford or don’t want to go to college to earn a degree in a high paying field then sacrifices need to be made, which in most cases include moving to where the jobs are instead of trying to attain that little brick house with a white picket fence. On the other hand, if you do have the opportunity to go to college, then studying and majoring in a low wage industry or having unrealistic expectations for your job opportunities with a feminist studies degree is pure folly.

I’ve heard that those feminist studies courses don’t even teach you how to sweat a joint in copper tubing. What a waste….studying how to be a victim.