U.K. implementing its own ban and Canada may follow. 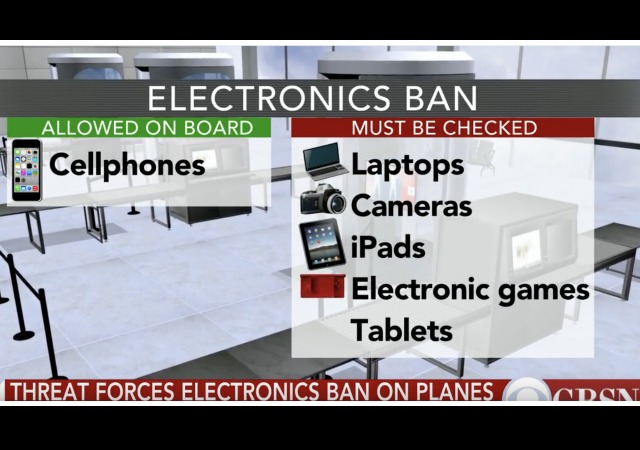 “We’re concerned about ongoing interest in targeting commercial aviation,” a DHS official said. The official cited terrorist attacks on airports in Brussels and Istanbul as part of a pattern or attacks that justified the ban

Some people have lashed out at President Donald Trump, thinking its another slap in the face towards Muslims. However, the United Kingdom has also adopted this same rule and Canada may follow.

Rep. Adam Schiff (D-CA), the top Democrat on the House Intelligence Committee, agreed with the ban after DHS officials briefed him on concerns over the weekend. Schiff stated “that the rules are ‘both necessary and proportional to the threat.'”

The rules apply to ten airports and the nine airlines from those listed countries. Passengers must check in laptops, tablets, and cameras:

Airlines on Tuesday moved quickly to comply with the U.S. directive. Saudi Arabia said the new restrictions will affect U.S.-bound flights on Saudia, as the national carrier is known, from the international airports in Riyadh and Jeddah. Emirates Airline, the world’s No. 1 carrier by international traffic, and Turkish Airlines also instructed passengers about the new electronics restrictions. Others followed.

However, the rules do not affect those on flights to those countries. It also does not apply to U.S. airlines “because they don’t directly serve the airports subject to the restrictions.”

People have lashed out at the ban:

This new ban otta solve all the problems those pesky Muslim electronics have been causing.

But is Trump onto something?

UK appears to be following US lead on electronics ban. Maybe it's more than just another Trump outburst https://t.co/kf9KovgsUo

The United Kingdom has announced a similar ban on direct flights from Egypt, Jordan, Lebanon, Turkey, Tunisia, and Saudi Arabia:

The restrictions, which also apply to tablets, DVD players and phones over a certain size, follow a similar US ban affecting eight countries.

Downing Street said they followed talks on air security and were “necessary, effective and proportionate”.

US officials said bombs could be hidden in a series of devices.
The ban applies to any device, including mobiles and smart phones, larger than 16cm long, 9.3cm wide or 1.5cm deep.

BBC home affairs correspondent Daniel Sandford said that the UK’s rule change looks like a “part of co-ordinated action with the US.” He also said that an “attempted downing of an airliner in Somalia last year was linked to a laptop device, and it appears the security precautions are an attempt to stop similar incidents.”

The UK stopped its airlines from flying to Egyptian beach resort of Sharm El Sheikh after the Egyptian arm of the Islamic State took “responsibility for the October 2015 bombing of a Russian Metrojet airliner.” The crash killed all 224 people.

A source within the transportation department in Canada has told The Globe and Mail that officials have started to review the U.S. ban and may implement its own rule:

For the time being, a spokesperson from the Canadian Air Transport Security Authority said late Tuesday morning that the security agency has not been told to screen passengers any differently since details of the U.S. plan quietly began rolling out Monday night. “Procedures of passenger screening from Canadian airports has not changed, and passengers should prepare just as they did before these new measures,” the spokesperson said.

The Wall Street Journal has listed other incidents caused by gadgets in the cabin: 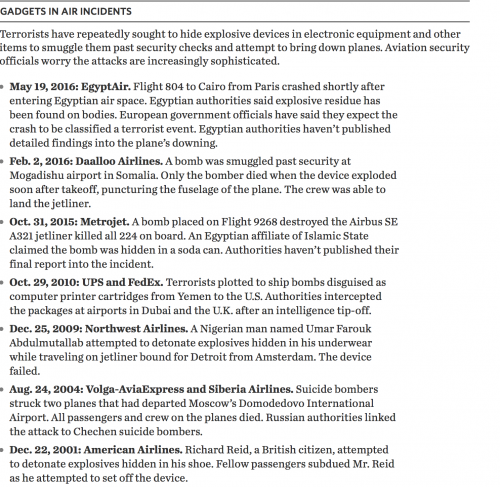 You’re seeing a strong correlation with items that either weren’t being checked or that can be destructive without obviously containing explosives.

Shoes and underwear were not being checked. Prime place to put explosives.

Due to their contents, print cartridges could conceal explosives from all but trained experts – in the actual bomb planted, explosive experts LITREALLY took it apart without realizing it was a bomb.

Any drink container could contain liquid that is not dangerous until mixed with another liquid or solid chemical. There is literally no way to check.

And now we’re at laptops. Which contain a battery big enough that it can be rigged to ignite/explode easily. If you don’t believe its possible look at the Samsung Galaxy Note 7. This ACCIDENTALLY catches fire, and the battery is a fraction the size of a typical laptop.

Frankly I was shocked that laptops weren’t banned years ago.

In short, terrorists focus on items and areas that they realize security either isn’t searching or naturally camouflages a bomb. Then they fuck it up badly enough that the only solution is an outright ban.

You do realize that past incidents is not the only reference that DHS has to look at when setting policy, right? That there are things like HUMINT, SIGINT, and good old found documents and materials from raids that also play a factor?

So many people weigh in on issues such as these that have absolutely no idea what information is fueling the decision and yet they speak so authoritatively.

Hmmmm….its possible the thing that joins all these dots together is a certain religion of peace? Naw, that can’t be it cannot precious?!?!?!

Since a tablet is essentially a cellphone with a larger screen and a bigger battery (and usually no cell connection) and since tablets are banned but cellphones are not I’d have to assume the issue can’t be the just the electronics.

Since the usual security test is just to boot the electronic device, and since tablets and laptops have really big batteries, perhaps it’s not too much of a jump to suppose some homicidal maniac might substitute a tiny battery inside that big battery pack (to provide enough energy to run the thing for at least a few minutes) and then use the remainder of the in there for, umm, something else?

Say an American has flown to one of these countries with a tablet or camera, can they bring it back home with them?

anyone can bring them on the plane, they just have to be in CHECKED luggage.

So I guess the authorities are admitting that their explosive sniffers don’t work.

Explosive sniffers don’t work if there are no explosives.

Take a significantly bigger laptop battery, put it in a bag containing plenty of flammable materials, maybe buy a couple tiny bottles of alcohol to use as an accelerant, and you could make a BIG fire on a plane, without any explosives.

And of course if they actually have a way to make the battery itself explode its more than big enough to blow out a window and decompress the cabin.

All without a single shred of actual explosives.