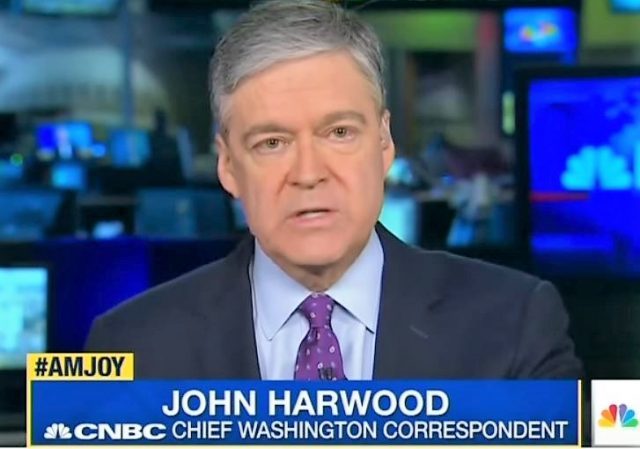 John Harwood is the CNBC journalist who advised Hillary’s campaign on how to handle Ben Carson and later bragged to Hillary campaign chairman John Podesta about the rude questions he posed to Donald Trump during a debate.

Harwood’s attacks on Republican candidates as a moderator of a Republican primary debate were met with near universal mockery.

Harwood claimed that Republicans are “radically opposed to government itself” and asserted that “governing is about taking action to solve people’s problems.”

JOHN HARWOOD: On this question of opposition party versus governing party, the modern Republican party is radically opposed to government itself. They’re radically opposed to taxation. What is governing? Governing is about taking action to solve people’s problems. They want government to do less rather than more. And so what they’re trying to do on health care is an act of negation, it’s an act of taking things away that President Obama did.

It goes without saying that Republicans, and more particularly constitutional conservatives, are not opposed to “government itself.” To the contrary, they passionately support the kind of government that was conceived by the Founders and established by the Declaration of Independence and the Constitution.

But whereas Harwood thinks that government should be about “solving people’s problems,” the Founders believed that the role of government is to respect the freedom of citizens to pursue happiness as they define it, in exercise of their unalienable rights of life and liberty.

Of course government has a necessary role, but it should generally be limited to doing only those things, such as defending the country against enemies foreign and domestic, that individuals cannot do for themselves.

“Government, even in its best state, is but a necessary evil; in its worst state, an intolerable one.” Thomas Paine

It’s full-on evident that John Harwood, the Clintons, and the Democrat Party are OPPOSED to government.

They prefer Medieval, Dictatorships instead.

Governing is about taking action to solve people’s problems.

So, why do the liberal Dimocrats in government just seem to cause people’s problems?

John Harwood is just one more liberal hack in the news media!
A true nobody!

“Government is not reason, it is not eloquence, it is force. Like fire it is a dangerous servant and a fearsome master.”

Radically opposed against bad government, yes we are. And terrible reporting by hacks.
Everyone hurry up and dump cable TV so this particular hack can learn if people would like fries.

“governing is about taking action to solve people’s problems.”

This as stupid a statement as that made by the MENSA from CA, Kamila Harris, who said that she would not vote for Gorsuch because he favored legalisms over fairness. This is right up there with obama’s claim that a “Tune up and tire pressure can equal the same amount of oil per year as ALL of our offshore drilling!

I always listen to the opinion of a slow-witted crook.

Not quite. The Declaration of Independence, The Constitution, it’s our government. However, the regime full of overlapping and convergent special and peculiar interests is hostile to the People and our Posterity, the first and second parties to the social contract.

Government is the greediest, mot corrupt and murderous force on Earth. It’s not even debatable.

Government is a necessary evil, but because of its potential for evil its power must be strictly limited by the rule of law, and its powers must be subservient to the rights of the people from which those powers derive.

notamemberofanyorganizedpolicital in reply to JoeThePimpernel. | March 25, 2017 at 6:59 pm

“He who governs best, governs least.”

“radically opposed to government itself”

Patently false. A significant portion of Republicans love government. As much as the Democrats. They just want to be the ones in charge.

How does he think we almost got RINOcare?

If Republicans were truly opposed to government than Obamacare would have been repealed on day one of the Trump administration.

Even though his statement is easy proven partially false, it still succinctly explains how progressives view both the government and the governed. People NEED to be guided by the higher authority, the learned and expert ruling class. And that is why progressives are so active in defining both classes of victims and “problems” that MUST be solved by the wisest people. The elected class in their minds. And it explains why any opposing view is so quickly and routinely dismissed as anti-intellectual and even ignorant.

Maybe John Harwood should get off his lazy, self promoting, and propagandizing a$$ and go help someone!

Government is actually the worst failure of civilized man. There has never been a really good one, and even those that are most tolerable are arbitrary, cruel, grasping and unintelligent. H. L. Mencken