The rollout of Chelsea Clinton’s political career is right on track. 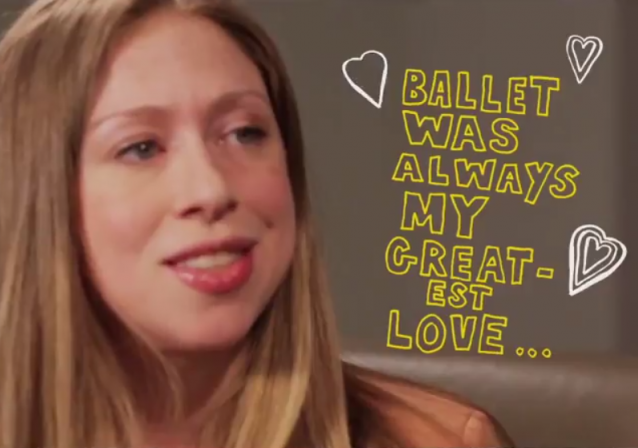 Now things have gone too far.

The political career of Chelsea Clinton is being carefully nurtured, and she now is the topic of favorable media coverage almost daily, frequently after she has tweeted in opposition to Trump.

Because she is a female Clinton, nothing is spontaneous (Bill is another story).

We posted just after her mother lost the presidential election how Chelsea Clinton Being “Groomed” For House Run. Since then, Clinton World has been sure to put Chelsea at the center of opposition to Trump….

Chelsea is being groomed. Take that to the bank.

Now there is news of more Chelsea absurdity, Chelsea gaining a “Power of Women” Award from Variety magazine (emphasis added): 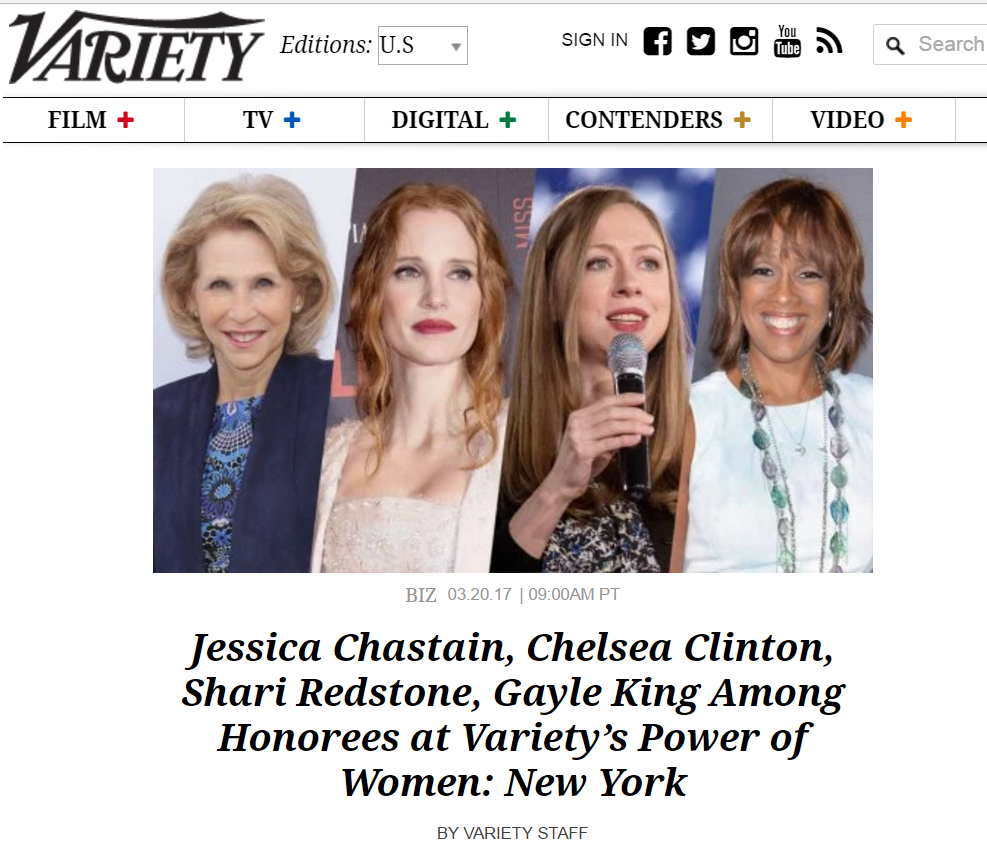 In partnership with Lifetime, the six women have been selected as Variety‘s Lifetime Impact Honorees for their humanitarian work. Each of the recipients will be featured on a cover of the magazine’s upcoming issue, which hits stands on April 18.

The Power of Women: New York event is tied to the annual New York Women’s Impact Report, which profiles women who made a significant impact in entertainment and media in the past year….

Clinton, vice chair of the Clinton Foundation, will be honored for her work with Alliance for a Healthier Generation, which empowers kids to develop lifelong healthy habits.

Most of the headlines have called this a “Lifetime Achievement Award” — but it’s only an Award through the Lifetime network. 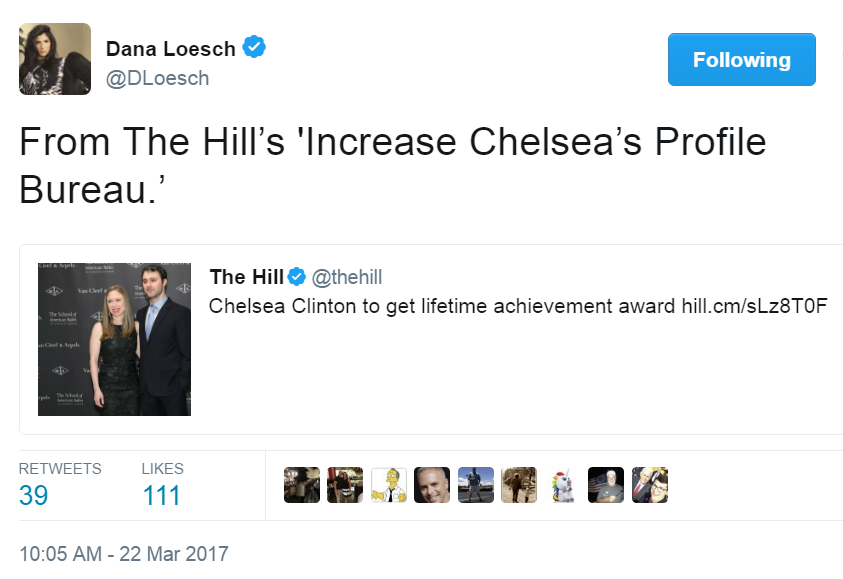 Chuck Ross at The Daily Caller summed it up well:

The Alliance for a Healthier Generation, which helps fight childhood obesity, is affiliated with the Clinton Foundation, where Clinton serves as vice chair.

Clinton’s other achievements include being born to one of the most skilled politicians in American history, growing up in the White House, landing a $600,000 contract with MSNBC, marrying a hedge fund millionaire, and tweeting constantly about President Trump.

I hope she runs for something. Anything. She will create an even bigger schism in the Democratic Party, and a “lifetime” of mockery from the right.

It’s a hard scrabble life for Chelsea getting by on nothing but white privilege.

White Privilege doesn’t exist. She is getting by due to her birth into the CCC – the Clinton Crime Corporation. Her resume is available at Borders, in the Crime Fiction section.

notamemberofanyorganizedpolicital in reply to Walker Evans. | March 22, 2017 at 7:02 pm

Getting by on multiple millions of dollars donated by Mummy’s Saudi slave masters.

This “award” is an insult to women.

“The Alliance for a Healthier Generation, which helps fight childhood obesity, is affiliated with the Clinton Foundation, where Clinton serves as vice chair.”

That’s appropriate. Everyone associated with the Clintons is involved in vice at some level.

Oh, piffle. Anybody who’s a total nobody should be able to land a Nobel Peace Prize, at least.

As ridiculous as it seems, she probably deserves this award more than Obama did his Nobel Peace Prize. Which ain’t saying much…

At least it’s a lesson to remind all of us why our forefathers rejected the entire idea of hereditary Nobility which old Europe was so addicted to. By the time you get to the 2nd or 3rd generation, you always end up with some addled headed knock knee’d cow eye’d mental midget, who everyone is supposed to stand around praising all day because they’re being paid to do so by the family she represents. It’s always been a pathetic spectacle.

Look on the bright side…she’s an only child.

It is hard to believe that there aren’t a lot of little Bill’s running around out there.

What about the black guy in Arkansas?

This is getting nauseating.

The media needs a counter for Ivanka. They can’t admit that Trump has the prettiest first lady in history as well as the most successful and talented first daughter.

Speaking of Ivanka. Last night I happened to scroll past CNN when Amanda Carpenter (a supposed republican and Ted Cruz’s alleged ex-mistress and one time advisor) was spouting off horrible statements about Ivanka Trump and how she is a horrible example for women, unqualified to advise President Trump on anything, and shouldn’t be allowed to have a position in the whitehouse.

All of it complete BS from a woman (Carpenter) who is a literal living example of the Peter Principle and how to sleep your way to income and position far greater than her intellect and abilities would otherwise allow.

The MSM are not only desperate to elevate Chelsea they are desperate to denegrate a actual real woman of accomplishment and training like Ivanka Trump. No room in feminism for an intelligent successful woman who isn’t an over the top progressive. This despite the fact that Ivanka is closer to be a moderate democrat on many issues and isn’t really a conservative at all.

Just prepping her for the next open New York Senate seat.

Which senator do you think Hillary will have killed to make room for Clinton 2.0?

I was listening to the Chris Plante Show in DC today and he said that Chelsea will probably run for Senate when Gillibrand steps down to run for President.

I can’t decide which is funnier. Clinton in the Senate or Gillibrand anywhere near the Presidency.

Thank God for Hillary Clinton, for without her, Donald Trump might not have been elected instead of Bernie Sanders.

More power to the talentless Chelsea Clinton: may she ride in save us from the democrats.

I doesn’t bother me in the least that Chelsea is being groomed — as long as they remember to sterilize the scissors before starting in on my Old English Sheepdog. 😉

Just like Mama and Obama. Rewards for showing up but no actual achievements. The next generation of the LibDem Party.

Clinton is so tiring I stopped listening to Delbert McClinton.