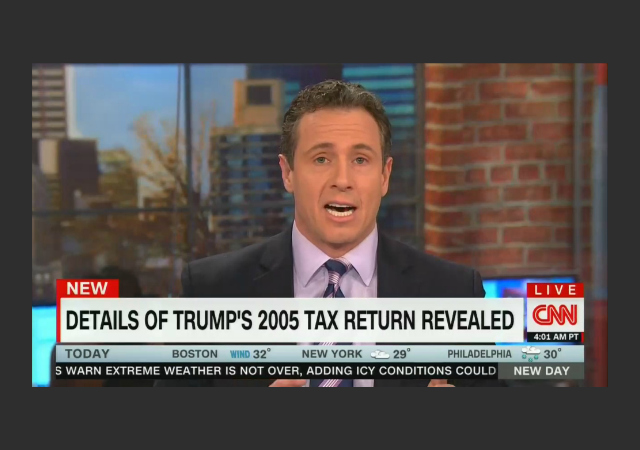 You might think that—given the chance to chide the star of a competing network—CNN would have called out MSNBC’s Rachel Maddow over her failed, overhyped “scoop” on Donald Trump’s taxes. But nary a discouraging word about Maddow could be heard on CNN this morning.  Liberal media solidarity more important than beating the competition?

Instead, commenting this morning on the release of Donald Trump’s 2005 tax return, CNN’s Chris Cuomo described the Alternative Minimum Tax [AMT] he paid as a “benefit” to Trump. It was just the opposite. The AMT Alternative Minimum Tax is designed to prevent people with large incomes from using deductions to reduce their tax liability beyond a certain amount. No matter how little a taxpayer would normally pay, the AMT imposes a higher minimum.

In Trump’s case, but for the AMT, he would have paid only about $5 million in taxes on income of about $150 million. But because of the AMT, he paid about $38 million. So the AMT hurt Trump to the tune of about $33 million. But describing the two pages of the return that were released, Cuomo said “they really just show you what he paid in taxes, what he could have paid if he didn’t have the benefit of the alternative minimum tax.” Benefit? Really? Fake news at its worst.

Note: CNN has also apparently decided to lay off Rachel Maddow for her highly-embarrassing, failed scoop on Trump’s taxes. Maddow had breathlessly hyped the release, only for it to turn into a modern-day version of Geraldo Rivera’s empty Al Capone safe. Far from hurting Trump, as Maddow no doubt had hoped, most in the MSM are conceding that the release helps the president by demonstrating that he earned a lot of money and paid a lot of taxes both in dollar amount and as a percentage of his income.

Have a look at the screencap from this morning’s CNN. It shows a tweet by President Trump’s son, Donald, Jr. In displaying it, CNN highlighted the body of the tweet and the first hashtag. But it didn’t highlight, or mention on air, Donald Jr.’s second hashtag, an allusion to Rachel’s big backfire: #thankyouMaddow. 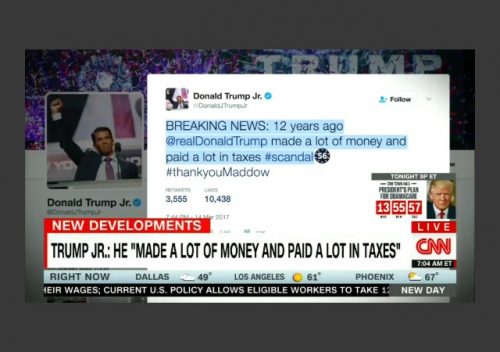 YUP this is the TPM. Commented on a HuffPo article because it made the same exact play

Now the AMT is a benefit? They’ve lost their minds.

Did they pay theirs?

Isn’t this the same guy who is ok that grown men should be allowed in female bathrooms and showers where minor girls could be undressed?

The AMT actually is a “benefit”, but certainly not to the taxpayer. It’s more like welfare for the US Treasury.

His Daddy has started campaigning for the 2020 Presidential Circus. Guess he has started his campaign to replace Daddy.

It’s his brother who is the NY governor.

I’m sure we are all on the same page here, and I know that I just can’t wipe the smile off my face as these libs are getting just deserves.

Every time they think its a “gotcha moment” well it is but on them.

Rush was having a blast today….chuckle-chuckle

too bad he didn’t do any research on the AMT, when it was put in a few decades ago, the either never considered inflation or deliberately ignored it, so few taxpayers not even in the same ball park as the Clinton’s have to pay taxes they shouldn’t.

The AMT is horribly complicated, and it usually makes it impossible to take the standard deduction. The fact that Trump had to use the AMT to figure his taxes was a big pain in the neck for his accountant. The lefties never met a tax they didn’t like. The way they get elected is to soak less than 50% of the population and give the money to the rest (over 50%) of the population. Then the recipients are likely to vote for you, and you are assured of winning using other people’s money.

He also said only the media could legally look at the Wikileaks emails and he would have to do it for us peasants.
I’ve watched him a few times and decided if he studies his material and really works at it he may just make it as a moron.