Geert Wilders Vows to Take the Netherlands Out of EU, Leads Polls Ahead of Election

Geert Wilders Vows to Take the Netherlands Out of EU, Leads Polls Ahead of Election 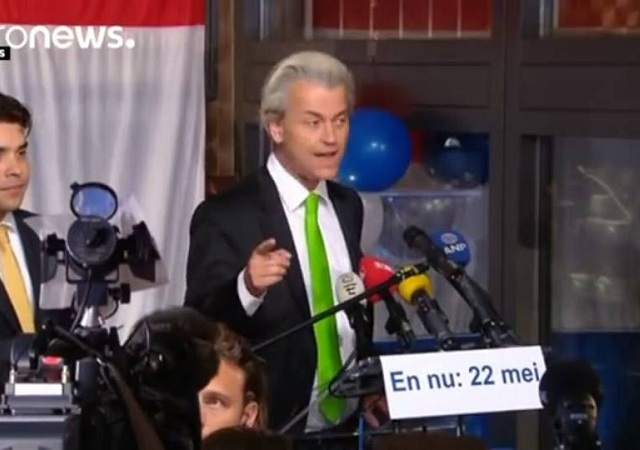 With five weeks to go before Dutch elections, politian Geert Wilders’ Party of Freedom (PVV) is leading all the major polls with just below 20 percent of the votes. If Wilders’ PVV manages to emerge as the single largest party, as polls currently suggest, the 53 year old Dutch politician could be called to build the next coalition government with him as Prime Minister.

Capitalising on last year’s Brexit vote and President Trump’s victory in the U.S. election, Wilders is campaigning with the slogan “The Netherlands is ours again.” His 11-point programme aims to “de-Islamise” the country and end the E.U.-mandated Open Borders Policy.

With 28 other parities in the fray, Wilders success would depend on his ability to form a coalition government. So far, most of the parties have rejected the idea of joining Wilders-led government. But going by the past record, other parties might end up working with Wilders.

On Sunday, the latest poll of polls, an amalgam of five separate opinion polls, suggests the PVV has the support of 18 percent of voters and would win between 25 and 31 seats in the 150 seat lower house of parliament.

Dutch projections come at a bad time for the E.U. and German Chancellor Angela Merkel.

Wilders vows to take his country out of the E.U., saying he will call for a Brexit-type referendum as soon as he assumes the office of Prime Minister. “The European Union is a political bureaucratic organisation that took away our identity and our national sovereignty. So, I would get rid of the European Union and be a nation-state again.” Wilders told media last week.

The Netherlands belongs to the six core state that founded European Economic Community (ECC) — the predecessor of the E.U. — almost 60 years ago in 1967. Netherlands’ exit from the E.U, or Nexit, will undoubtedly spell doom for the German-French ‘European Project”.

The trouble for Brussels doesn’t just end there. In France, Marine Le Pen of Front National has 26.5 percent lead over her conservative rival in the polls. The first round of the two-stage presidential election is set to take place in April, followed by a possible second round in May. “Le Pen will kill the EU,” her presidential rival Emmanuel Macron ‘warned‘ the French voters this week.

German Chancellor Merkel is slipping in polls ahead of September election. Her Pro-E.U. Social Democratic challenger Martin Schulz continues to gain ground, with right-wing Alternative for Germany (AfD) party also gaining strength as third-largest political force. Embattled Merkel is doubling down on her ‘Refugee Welcome’ Policy, reiterated this month that there will be no upper-limit to migrant intake if she succeeds in her re-election bid.

With Merkel serving as the poster girl for unregulated mass-migration into Europe, AfD is surging ahead in recent German polls. With more than eight months to go, German election remains up for grabs.

With millions of voters in Germany, France, and the Netherlands heading for polls this year, 2017 could be the year of democratic ‘European Spring’ as nation-states of Eurozone take back their sovereignty back.

Video: PVV leader Geert Wilders vows to take the Netherlands out of the European Union, February 2017

If Wilders’ PVV manages to emerge as the single largest party, as polls currently suggest, the 53 year old Dutch politician could be called to build the next coalition government with him as Prime Minister.

With less than 20% of the vote?! Not likely. Other parties may have been willing to accept Wilders’s help, but they will not agree to serve under him. They’ll tell the King this, and he’ll look elsewhere for a PM. There may be three or four failed attempts, and maybe even a new election, but the King will not ask Wilders, not unless he gets at least 30% of the vote.

I agree, and think it is much more likely that several of the opposition parties will be asked to form a coalition government. Of course, they will only be united in their opposition to Wilders, so it will be a very weak and fractious government that cannot last for very long.

I also think that this may be a wonderful political gift to Wilders. As long as he is out of power he will not have to take responsibility for any of the consequences of hard decisions that the government will be asked to make, while at the same time the coalition government will have to treat him very gently, since he may have enough votes to be able to bring the government down anytime one of its constituent parts becomes disgruntled.

Yes, this is exactly right. And next time he may get 30%, which would make it much more likely that the king would have no choice but to give him a crack at forming a government.

Netherlands should get out before the EU collapses on top of them. But, remember that Netherlands population has highest per capita debt in Europe. Not government debt. Personal debt.

Well, Wilders has been ahead of the curve on this for more than 10 years. PM Rutte says he won’t work with Wilders, meanwhile, he sounds more and more like him. There have been times when it took them 6 months or so to come up with a government. We’ll see.

The Migrant Crisis of the past couple of years has done a lot to rip the blindfold off of the eyes of Europeans about what letting massive amounts of islamic “refugees” into their countries will do to them. The growing push back against the policies and institutions responsible for these disasters is heartening to see. I just hope it’s not too little to late to save a number of these nations from being taken over by the growing muslim populations already there.

What is happening in Holland is similar to what happened here with Trump. The average guy has been lied to for so long that he realized that only a radical could change the system. Wilders is that radical and he will change the system if his party wins enough to throw its weight around. The establishment there is like the Demorat party here and they are doing all within their power to block or slow him down. It will dawn on the Dutch EU enthusiasts that the people are fed up with the “Can’t we all get along” BS that they are being fed. And like the Demorats here who are trying to block everything Trump tries to do, they will pay a steep price come next election.

The author seems a little mathematically challenged. 1967 is precisely 50 years ago, not “almost 60.”

Looking forward to more of it.

The Netherlands has proportional representation, so unless Wilders can form an anti-EU coalition, nothing will come of his party receiving a plurality.

France has a run-off, and Le Pen getting a plurality in the first round does not guarantee other parties won’t coalesce around her opponent (as happened before in the French Presidential election before the last, IIRC).

Interestingly enough, Italy might be the next one, and first within the Euro currency community, to go, with three anti-EU parties (Five Star Movement, Forza Italia, and Lega Nord) polling, combined, at over 50%:

Now our globalist masters are telling us Wilders can’t win election in the Netherlands, and I’m suitably impressed.

sir geert wilders for prime minister of the netherlands!!!!!!!! wilders is crushing it!!!!!!
he will be a fantastic pm!!! all of the biased liberal media are trying to help his opponents, but he is still crushing it!!! his pvv party is gaining huge strength and momentum!!!! rutte and the vvd are complete failures, as well as all of the other loser liberal politicians!!! all talk and no action!!! they had lead the netherlands down the drain, and now they are trying to blame, not only a man, but the entire pvv party, for their liberal complete failure!!! these liberal politicians have been awful for the great dutch people, and they are absolutely sick of rutte and his cronies!!!!! telling the dutch time and again how wonderful integration is and will be, while their country is literally going down the damn drain!!!! i would be furious too, if my gov let foreigners come into my country and literally took it away, because my gov was to gutless to stand up and fight for our country!!! the vvd now threatens to shut down the damn gov, if they do not get their way!!!! rutte and the vvd are disgusting!!!!!
utterly disgusting!!!! how anyone could vote for these losers is beyond me!!!!!