Filmmaker Confirms Numbers on Refugees And Crime in Sweden

Filmmaker Confirms Numbers on Refugees And Crime in Sweden

“the murder rate [in Sweden] is up almost 70 percent” 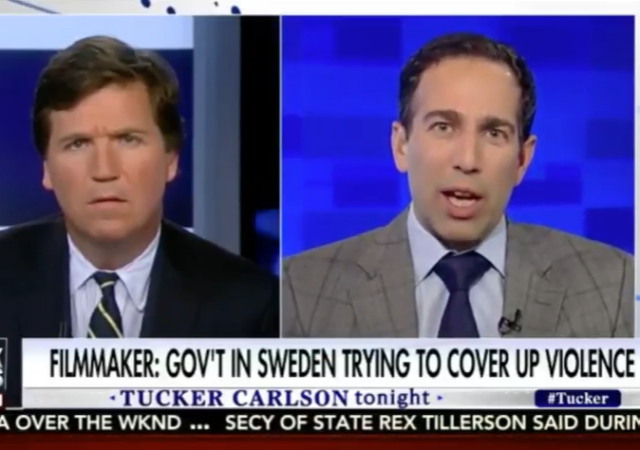 During his rally in Florida this weekend, Trump brought up the problems some countries in Europe and elsewhere are having with refugees. He singled out Sweden and the left, including many people in media, jumped on it.

It turns out, Trump was basing his claims on a segment from the Tucker Carlson show in which filmmaker Ami Horowitz described a documentary project on the subject. Ami returned to the show last night and after Tucker replayed the clip, Horowitz backed up his project with numbers directly from the Swedish government.

Filmmaker Ami Horowitz defended his investigation of refugees in Sweden Monday night amid a blacklash after President Donald Trump cited his work during a campaign speech over the weekend.

“Between 2012 and 2016 the murder rate [in Sweden] is up almost 70 percent,” Horowitz told “Tucker Carlson Tonight,” citing the Swedish National Council for Crime Prevention. “Rape between 2007 and 2015 is up a similar number, almost 70 percent. These are their statistics, not my statistics.”

At the Florida event Saturday, Trump said Sweden “took in large numbers” of refugees and was “having problems like they never thought possible.” Trump later specified on Twitter that he was referring to Carlson’s original segment with Horowitz, which aired Friday night.

Trump’s remarks, which implied that a terror attack had hit Sweden Friday night, was roundly criticized by Swedish officials and mainstream media outlets. A pair of policemen Horowitz interviewed for his film also took issue, with one referring to him as a “madman.”

“Can you imagine the amount of pressure that must be on them from their bosses because of this maelstrom that they’ve kind of found themselves in?” Horowitz asked. “They’re the ones who discussed [how] they didn’t want to be considered racist. They’re the ones who used the words ‘no-go zones’ in describing these Islamic enclaves [in Swedish cities], not me.”

Later in the program, Tucker spoke with Anne-Sophie Naslund, the U.S. correspondent for the Swedish newspaper “Expressen” about the fact that in Sweden, people can face investigation and even jail for saying the wrong thing.

He suggested that this makes it difficult to know what people really think about these issues because they live in fear of being prosecuted as a racist.

You can watch the exchange below:

This is what people mean when they say the left wants America to be more like Sweden. Progressives are hell bent on bringing thousands of unvetted refugees to the U.S. and you’re a racist if you disagree.

I’ll leave you with this. Note the source of the numbers.

These #’s are four years old. Anything current?

2016 sounds pretty current for statistics:
“Between 2012 and 2016 the murder rate [in Sweden] is up almost 70 percent,” Horowitz told “Tucker Carlson Tonight,” citing the Swedish National Council for Crime Prevention. “Rape between 2007 and 2015 is up a similar number, almost 70 percent. These are their statistics, not my statistics.”

I don’t know if this was mentioned in the video elements (Can’t watch them from where I am) but things got so bad that the Swedes stopped recording statistics on how many crimes were directly tied to their migrant problem rather than admit they have a migrant problem.

yep – once any government starts taking actions to officially erase any data that might look bad, that guarantees that it’s looking really bad.

I watched Bob Beckel on TV yesterday and what I saw was astounding and indicative of what the Left is doing today. Beckel talked about Trump’s remarks in his speech when her referred to what had happened in Sweden that contained no reference to a terrorism event though one could infer that is what Trump meant if one refused to see the comment in any other way.
>
Beckel claimed that this was an outright lie since there was no terrorist event that occurred there. When Beckel was shown Trump’s clarification that he was referring to Tucker’s interview that had aired on the night in question, Beckel refused to accept this completely plausible explanation and instead adamantly kept the claim that Trump was lying about a terrorist event in Sweden that never occurred.
>
How has the Left gotten so off the rails where they are nw demanding that Trump’s statements mean only what they want them to mean? What this amounts to is nothing less than creating lies about Trump’s statements in an effort to paint Trump the liar. Will this circus ever end? Is there any question left as to why the Left and the MSM has little to no credibility left?

Beckel must have had to double down on toeing the liberal line for Fox. Because he used to be outspoken in his condemnation of Islamic/Muslim attacks.

Bob Beckel should have listened to Dean Wormer’s warning: “Son, fat drunk and stupid is no way to go through life.”

Trump, Trump, Trump. See, Trump just had to mention the problems in Sweden and his words engender riots in the Swedish Islamic/Immigrant community (Pun).

Probably the only reason the AP reported the riots is because others could then use the argument suggested above.

Riots are not new in Sweden. The Swedes have had bad Islamic problems since they started to import Muslims.

notamemberofanyorganizedpolicital in reply to davod. | February 21, 2017 at 2:44 pm

“The clashes started late Monday when a police car arrested a suspect…” I wonder if there were any actual police in the car when it arrested the suspect. SMH

Certainly, a gun jumped out of the car and pointed itself at the suspect first. We have that kind of problem with self-aware firearms here too.

notamemberofanyorganizedpolicital in reply to georgfelis. | February 21, 2017 at 2:46 pm

Must have been that criminal, Swedish Panda again.

Next, they’ll claim rape is up 70 percent because racist Swedish men are raping refugee women.

If you have to attack someone for things he didn’t actually say, perhaps he’s not really the villain you’re claiming.

This is the Achilles’ heel of all propaganda. And it’s now where the attacks by the D’rats, the Libs, the Press, the Never Trumpers, etc. fall flat.

The US media just gained another enemy. The Swedish government had pretty much covered up the huge immigrant crime problem that they have, until the media brought it to the world’s attention when they attacked President Trump over a statement which they didn’t understand and did not wait to get an explanation of. Now, in their overweening need to attack Trump, they have embarrassed one of the most liberal countries in the West. Gotta love the Law of Unintended Consequences.

Don’t you think that is exactly what Trump intended?

I see and have seen Swedish politicians doing the ‘Animal House’ scene for far too long. “Remain calm! All is well!”

And they’re reversing it by approaching US racial and ethnic diversity levels.

Mother Jones? Seriously. That must be some good ganja.

SDN: And they’re reversing it by approaching US racial and ethnic diversity levels.

Not according to the data. More particularly, it directly contradicts the claim made on Fox News.

As already noted, the chart is from Brottsförebyggande rådet, an agency of the Swedish government.

That’s “rape”, though on second thought …

The claim was the the murder rate has increased by 70%. That claim was false.

Homicide is not murder.

The original Swedish refers to »Antal fall (offer) för dödligt våld» or number of cases (victims) of lethal violence. They also distinguish these cases from obscure deaths which were initially counted as murders (mord), but were later proved to be due to other causes.