Whatever happened to those liberal bumper stickers from the W days: ‘Question Authority’ and ‘Dissent is the Highest Form of Patriotism’? 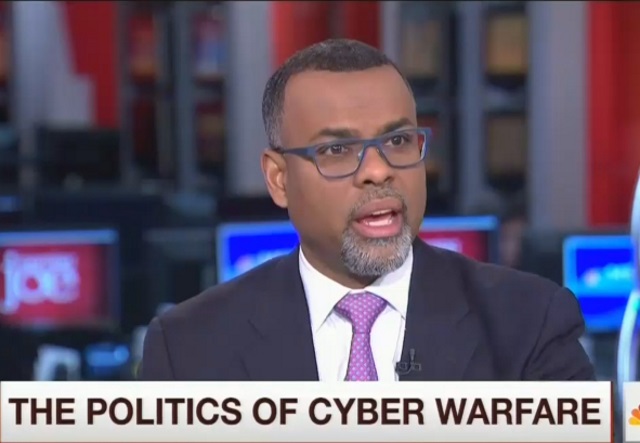 Whatever happened to those ‘Question Authority’ and ‘Dissent is the Highest Form of Patriotism’ bumper stickers that flourished on liberals’ cars during the dark days of George W.’s administration?

Now, in the waning days of a Dem presidency, a touching trust in the judgment of the president is in evidence on the left. On today’s Morning Joe, Prof. Eddie Glaude Jr., chair of Princeton’s African-American studies department, said he is “struck” that anyone would question President Obama’s judgment that sanctions against Russia are warranted. After all, argued Glaude, the president “has sworn to protect this country.”

There are two parts to the question here. One is whether the hacking actually occurred. President-elect Trump will be fully briefed on the matter this week, and in a Morning Joe appearance today, Trump White House spokesman-designee Sean Spicer said Trump is open to accepting the conclusion that Russia did indeed hack.

The second is whether the sanctions imposed by Obama were proportional. Spicer pointed out that when China hacked the most personal information of millions of federal employees, the Obama admin never uttered a peep of protest against China and imposed no sanctions. It’s only response was to offer one-year of free credit monitoring to people whose personal data had been hacked.

Spicer wondered out loud whether the alacrity and extent of the Russia sanctions were not politically inspired, in response to Hillary’s defeat. But that kind of thinking would be “bizarre” in Glaude’s view.

Donald Trump will also swear to protect this country. Will Professor Glaude be so ready to accept the national security judgments of the president come January 20th, or are he and his cohorts on the left dusting off those old bumper stickers even as we speak?

EDDIE GLAUDE JR.: What I’m really struck by in the conversation is that the President of the United States, the person who has sworn to protect this country, has decided, based on the intelligence that he has received, that sanctions are warranted. And we are questioning, right, whether or not that is true. Whether or not the Russians have actually impacted our elections. The President of the United States has received the intelligence and has acted on it. So the actual act of questioning whether or not it happened, and all, it just seems to me really bizarre.

Yep, those stickers will be in vogue on a new generation of priuses. Funny how the bias works.

“The President of the United States has received the intelligence and has acted on it. So the actual act of questioning whether or not it happened, and all, it just seems to me really bizarre.”

Where was this idiot when ALL of the intelligence services in the world told us that there were weapons of mass destruction in Iraq? Did he question GWB’s actions? What do you want to bet he was livid over them?

He read about it in the paper.

Yep, all the AA credentials are in place. Who’s surprised at the predicated political support of one bro for another bro.

Glaude, chair of Princeton’s African-American studies department. Ya know, one of those really tough-as-nails disciplines like chemistry and physics.

The math is the hardest part of AA studies. Wait, there isn’t any math. Sorry!

A whole department dedicated to AA?? I recall an essay by Shelby Steele in which he questioned a school having a Women’s Studies department, with all the Chairs, and clerical staff and office space dedicated to it, when a few directed elective courses in the English or the Sociology Department that concentrated on female authors would do the trick. The same concept might fit for AA. Keep those college costs down.

I know a lot of cops who liked those bumper stickers. It helped them, when they were confronted with multiple offenders, decide which car to stop and cite.

Someone seems to be forgetting a major factor wherever Obama is involved.

The president “has sworn to protect this country” from all threats, real and imagined.

Why did Russian hacking only become sanctionable after Hildebeeste lost, instead of when it was brought to his attention?

Why wasn’t Chinese hacking of OPM sanctionable AT ALL?

It was the unclassified email systems, but resist the temptation to say the word “only” when discussing said systems. Their security was so lax that they do discuss classified information. Especially the political appointees. They think they’re clever they can “talk around” it. They’re idiots. Any adversary who has other intelligence means and methods can easily fill in a lot gaps. They’re just giving it away. This is particularly true in the case of the State Dept.; when I was in the Navy we intel types considered Foggy Bottom largely useless at it’s day job and otherwise a major threat to national security.

But, hey! These hacks (actually intrusions would be the correct word) only compromised national security. Nothing really important. This time, though, Putin went too far. He ruined the Dems chances of keeping the WH, or so Obama thinks, by making the Dems live up to their promises of Transparency.

“…Anyway, their new theory – as I understand it, because it seems coherence-challenged – is that the Russians somehow forced us to vote for Trump by releasing authentic emails that revealed the depths of Democrat perfidy and the media’s Clinton collaboration. Basically, the Russians unfairly told us the truth that Democrats and their media minions wanted to deny us, and that “hacked” the election. Oh, and Trump is insufficiently mad about Hillary and Company not being able to effectively hide their web of corruption and lies thanks to John Podesta not understanding that you don’t click the link in the email from the Oil Minister of Nigeria, Crown Prince Goodfellow Scamoscammer.

Intimate knowledge of Clinton’s WaterCloset suggests that Deep Plunger was a DNC insider, perhaps from the Obama faction or Obama himself, or a disenfranchised Sanders supporter.

How quickly people forget the facts of the 2003 Invasion of Iraq.

First of all, the 2003 invasion was NOT a separate war. It was merely a continuation of the 1991 Gulf War. The 1991 hostilities ended in a cease fire, which was contingent on the Iraqi Hussein government adhering to certain specified conditions. Iraq violated those conditions regularly throughout the decade following the war.

Second, due to the repeated cease fire violations during that time, culminating in the expulsion of the UN weapons inspectors, no further justification was required for the US and its allies to take military action against Iraq.

Third, the WMD evidence was not necessary to justify the invasion of Iraq and the removal of Saddam Hussein. However, the Bush administration made the information available to the public, along with the foreign intelligence sources, for objective analysis. If any of it was erroneous, or even false, is largely irrelevant to the justification required for the invasion.

In the case of President Obama’s actions, in re: the Russian “hacking” case, NO evidence has been submitted, for public inspection, which in any way shows that the Russian government was responsible for any of the actions claimed by the Obama administration. And, such evidence WOULD be REQUIRED to justify the actions taken by President Obama.

Just another example of the “most transparent administration” in US history.

He was struck with a stupid stick. I always run politicians actions through my Gulf of Tonkin Resolution filter. I “Remember the Maine” when I read a newspaper.

When it comes to bizarre, he is an expert.

I turn to AA Studies Profs for my Foreign Affairs and National Security Advice. Always

Based on the JAR from the FBI/DHS and Mr Obama’s reaction, I would have to assume that every Nigerian in the country had been sent back by now.

Another clueless academic speaks. Where were those sanctions when Russia invaded Crimea and Ukraine? Oh but Hillary lost and the Russians can be a scapegoat. All govs hack each other. The dems were warned and did nothing to prevent any hacking. The GOP managed not to get hacked.

Yes, Professor Glaude, as strange as it may seem, questions are allowed, even ones that you think are “bizarre.” It’s one of the important bases of our American society. Moreover, up until more recent times, questions, not matter how odd or strange they might seem, were very much a part of higher learning.

It seems odd that you, a professor, would hold such a position as the one you articulated. Setting aside the topic of the questioning of a President’s decisions, isn’t it the nature of education that ideas are proposed and put out there for discussion and debate? Isn’t it also its nature that if such ideas are not valid this discussion in the arena will disprove them and if valid this will be demonstrated as well. Isn’t this a trademark of an educated, intelligent person: to be able to field all sorts of questions, whether we might find them comfortable or not?

Seems to me that the only ones fearful of questions are ones who have an idea of what the answer might be and it is this which is the foundation of their fear. Questions: they’re how we learn, they’re how we are tested and grow, and, they’re also a test of our character.

Anyway, didn’t mean to lecture you. So, good luck with that whole teaching thing, Professor Glaude.

Note that we have never needed an Anglo-Saxon studies department. We call that History, Economics and Science instead.

Blacks and women will never be regarded as true equals as long as these special programs exist. And of course, that is the intent of these programs – to keep the race and gender envy alive.

The GOP is the American political wing of the Kremlin.

This fellow is an expert on grievance. It does not take any brains, just the sure knowledge that you are scared to attempt a real academic field of study. Just like his hero, Obama.

1) “Obama has sworn to protect this country.” Indeed, and the ultimate proof that he has done a superb job with this has to be the agreement he and Mr. Ketchup arranged that gave Iran billions of dollars they immediately used to enhance their construction of nuclear weapons.

2) “Obama was given intelligence about Russian hacking.” First, the best the CIA’s analysts can say is that there are indications that Russia may have been involved with the entry into the DNC’s servers; there was NO hacking of the election. Second, I believe it would be a wonderful thing if someone, anyone, could give Obama some intelligence; it has been sadly lacking these last eight years!