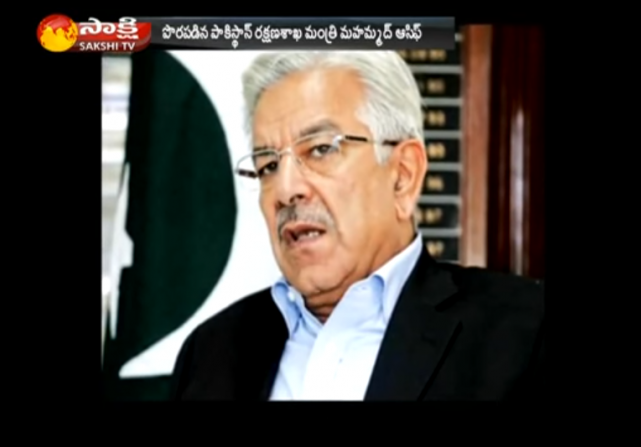 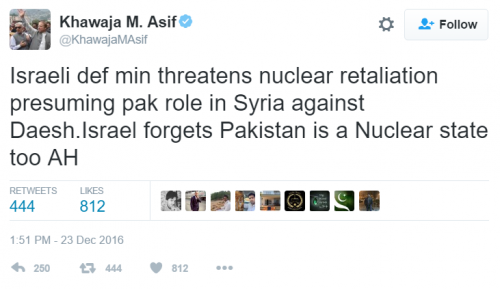 Israel had made no such threat, as the Israeli Defense Ministry responded on Twitter: 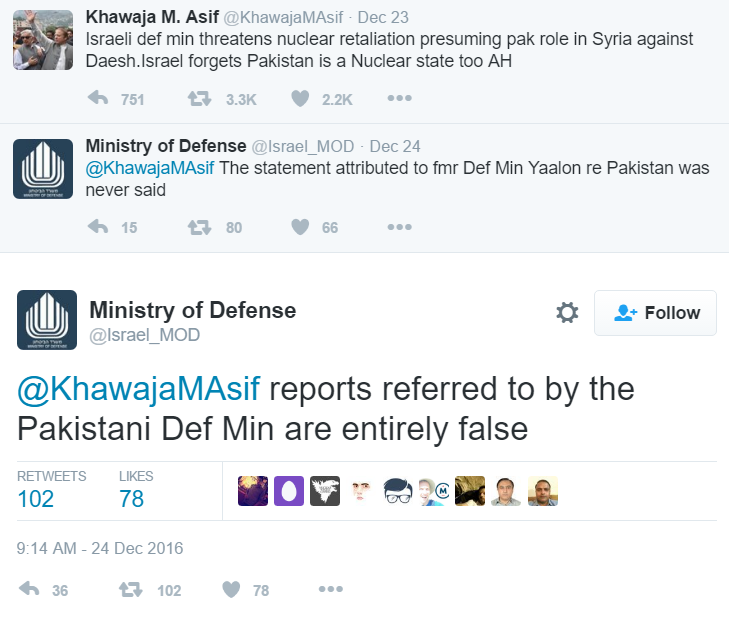 A senior Pakistani foreign ministry official told the Financial Times that the episode highlighted a “double risk”. The person referred to “the use of social media, which allows people to react without thinking through their response; and the fact that the defence minister does not appear to have consulted anyone”.

Ali Sarwar Naqvi, a former Pakistani ambassador to the International Atomic Energy Agency, said: “This was a very ill-thought statement without verification of the source of this news. The foreign ministry should have been consulted.”

In other Twitter nuclear news, Washington Post columnist Greg Sargent reports that Donald Trump could spark a nuclear war through his tweets, Could Trump help unleash nuclear catastrophe with a single tweet?

Arms control experts I spoke with suggested that Trump’s willingness to Tweet about nuclear weapons raises the possibility of Trump doing the same as president — and more to the point, the possibility of him doing so amid some species of international crisis or escalation.

Jeffrey Lewis, a nuclear non-proliferation expert at the Middlebury Institute of International Studies, points out that in peacetime, any belligerent Trump Tweet about nuclear weapons might not appear as alarming, simply because “confirmation bias” might lead key actors not to interpret it in its most frightening light at that moment. Amid rising international tensions, though, that confirmation bias might work in the other direction, he says.

“Imagine we’re in a crisis — if he recklessly Tweets, people could read these things in the worst possible light,” Lewis tells me. “The North Koreans have a plan to use nuclear weapons very early in a conflict. They’re not going to wait around. If they think we are going, they’re going to use nuclear weapons against South Korea and Japan.” …

“Imagine if the North Koreans are looking for any signs that we’re about to attack as their signal that they have to go,” says Lewis, adding that if Trump “says the wrong thing” and “gives the impression that we’re about to act,” the North Koreans might “decide not to wait around to find out if that’s true or not,” and might hit “targets throughout South Korea and Japan where U.S. military forces are stationed.”

The nuclear tweet threat imagined by the “expert” consulted by Sargent seems not unique to social media. A leader could make a provocative statement anywhere that could get a reaction, not just on Twitter. You know, like joking on a hot mic:

And it’s not comparable to the Pakistani example, where there actually was a threat, albeit not immediate, made.

The immediate problem, it seems, is not so much Twitter, but how “Fake News” is used in the Muslim world to spread conspiracy theories about Israel:

The Israeli/India partnership must worry the Pakistanis.

I tried Twitter a couple times, never liked it, killed my accounts both times, and this is why. I did not want to be responsible for starting a nuclear war.

Social media in general is more a curse than a blessing.

It tends to amplify the very worst “thinking” all over the world, and traps and re-amplifies the worst feed-back in a disgusting loop.

Yippee! Thanks to the internet the whole world has its fingers on the launch button!

Tyrant Obama the Liar helped Iran to develop nuclear weapons and funded their domination of the Middle East, yet this idiot is worried about Trump’s tweets?