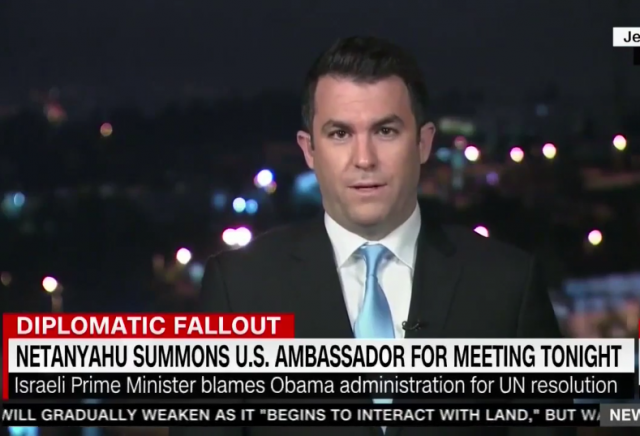 No one with any credibility believes that the anti-Israel, anti-Jewish UN Resolution to which the U.S. abstained on Friday just happened without Obama administration urging.

A question has been just how much Obama colluded.

The U.S. certainly sent signals that this time would be different, that the U.S. wouldn’t use the veto. That was the green light, enough.

But Obama is being accused of much more, actually pushing and colluding in the resolution.

David Keyes, Netanyahu’s spokesman, said as much on CNN this morning:

Well, we have ironclad information, frankly, that the Obama administration really helped push this resolution and helped craft it, from sources internationally and from sources in the Arab world, and it’s really an unfortunate legacy, kind of last minute jab at Israel that actually distances peace…. We have full confidence that the information is accurate ….

Keyes repeated the claim of “ironclad information” on Fox News.

The White House already has acknowledged President Obama made the decision for U.S. Ambassador Samantha Power to abstain. Unclear was how involved the Obama administration was in crafting and pushing the resolution itself – which initially was put forward by Egypt, and then pursued by New Zealand, Malaysia, Senegal and Venezuela.

The White House so far has not responded to the Netanyahu government’s latest criticism, which included similar remarks by the prime minister himself before a gathering Sunday of cabinet ministers. “From the information that we have, we have no doubt that the Obama administration initiated it, stood behind it, coordinated on the wording and demanded that it be passed,” he said, according to The New York Times.

The Affordable Care Act became tagged with the eponymous name Obamacare. Will the next round of the Intifada or perhaps even a wider war in the Middle East be known as Obama’s War? Surely, more bloodshed will follow Obama’s snake in the grass strike against Jews and Israel.

I’ve got one problem with the simple narrative that 0bama and Powers simply took advantage of their lame duck status to let their inner antisemites out. It sounds easy and obvious, but if so why did they abstain and not make the resolution unanimous? Surely they would have wanted to, so what stopped them? The fact that they merely abstained tells me that something else is going on, but I don’t know what.

Plausible deniability for the alphabet networks?