Most Likely to Block People on Social Media Due to Political Beliefs? Democratic Women

Most Likely to Block People on Social Media Due to Political Beliefs? Democratic Women

Raise your hand if you’re shocked

Turns out there’s a particular group of gals more willing to block or “unfriend” people on social media due to their political beliefs — Democrats.

A survey conducted by PRRI found that only 13% of respondents fessed up to blocking, unfriending, or unfollowing “someone on social media because of what they posted about politics.” Given how nasty this two-year-long election season has been, 13% seems low.

Both Democrats and those identifying as moderates were more likely to eliminate someone from their political circles than Republicans.

Only 13% of the public say they blocked, unfriended, or stopped following someone on social media because of what they posted about politics. Again, sharp political divisions emerged in the tendency to remove people because of the political opinions they expressed.

Nearly one-quarter (24%) of Democrats say they blocked, unfriended, or stopped following someone on social media after the election because of their political posts on social media. Fewer than one in ten Republicans (9%) and independents (9%) report eliminating people from their social media circle.

Political liberals are also far more likely than conservatives to say they removed someone from their social media circle due to what they shared online (28% vs. 8%, respectively). Eleven percent of moderates say they blocked, unfollowed, or unfriended someone due to what they posted online.

When those groups are broken down further, Democratic women are most likely to excommunicate someone for their political beliefs. 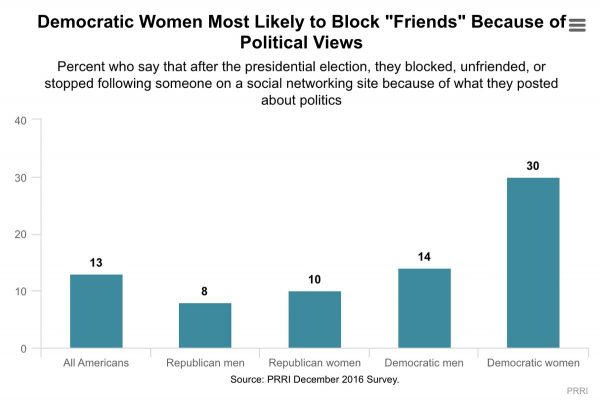 There is also a substantial gender gap. Women are twice as likely as men to report removing people from their online social circle because of the political views they expressed online (18% vs. 9%, respectively). Notably, the gender gap also differs significantly across political affiliation. Three in ten (30%) Democratic women say they removed an individual from their online social network because of a political opinion they expressed, while only 14% of Democratic men reported doing this. Republican men and women are about equally as likely to say they blocked, unfollowed, or unfriended someone on social media because of political posts (10% vs. 8%, respectively).

Contrary to pop-culture depictions, Republican women are the least caddy of the groups surveyed.

That can be a blessing.

Bitterly clinging to their feminism, liberalism and whateverism.

If we have to eventually elect a president just because she has a vagina wouldn’t it make sense to elect a better looking vagina holder?

This could be a result of selection bias. Not in the study, but in the selections made by the “public” concerning who they “friend” on social media. Conservatives may be initially more discriminating (or “judgmental”) than liberals, and therefore select people initially who are less likely to later offend politically. This is not necessarily a bad thing (as liberal would like people to believe). Your parents may have told you to pick your friends carefully, or at least to avoid certain types for your own good. It’s possible that conservatives were brought up in a household more likely to instill this form of discrimination/judgment, and as adults these people may continue to be discriminating in their choices of friends, in both real-time and social media. So naturally they would have less cause and fewer opportunities to “unfriend” someone because they made good choices of friends in the first place.

….and do I know about this! A Lib/Prog/Dem classmate of mine who is currently a VP at CFU unfriended me after she posted a picture shaking hands with Bill Clinton and I asked her if it was the same hand that Ole Bill had diddled Monica Lewinsky with.

I would add one other classmate here too, a male former Democrat Lt. Governors of MI, John Cherry, who has unfriended me after commenting on his inane FB memes.

I had an account for barely two weeks when Facebook started, but the “friending” drove me crazy, so I shut it down as fast as I could.

Politics is to rough-and-tumble for the little ladies. If they can’t take the heat, they should go back to their kitchens.

This might be a matter of people categorizing what they do differently– the percent that have unfriended for “politics” seems to reflect the groups’ tendency to consider things political.

I know I’ve never had a Republican man talk about my having more than two children as a “political statement,” but an awful lot of Democrat women seem to categorize it that way.

Heck, refusing to support the actions of bullies who say that they’re leading an “anti bullying” group, or saying “Merry Christmas,” is insisted on as being “political.” Only if you disagree with them, though– if they agree with you, it’s just good sense. 😀