Kristof to fellow Liberals: ‘We want to be inclusive of people who don’t look like us — so long as they think like us.’ 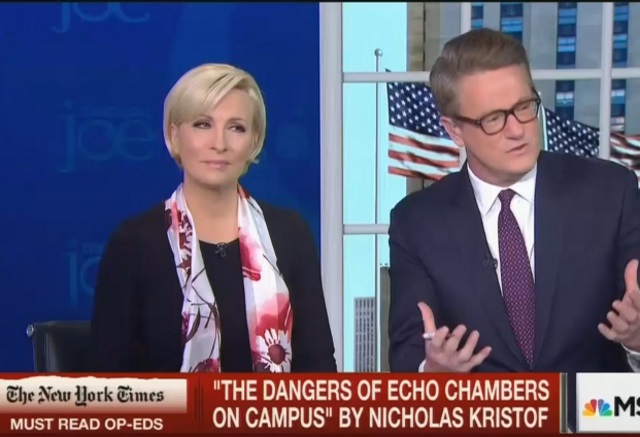 The notion that American academia is a liberal bubble and echo chamber is nothing that Legal Insurrection hasn’t documented and decried a thousand times. But it is refreshing to hear that complaint coming from the lips . . . of a leading liberal journalist.

Today’s Morning Joe devoted a segment to self-described liberal Nicholas Kristof’s New York Times column, “The Dangers of Echo Chambers on Campus.” Key lines: “We liberals . . . too often, we embrace diversity of all kinds except for ideological . . . We champion tolerance, except for conservatives and evangelical Christians. We want to be inclusive of people who don’t look like us — so long as they think like us.”

Also encouraging was the panel’s consensus in praise of the column, including by Dems Mika Brzezinski and Harold Ford, Jr., and even from fellow Timesman Jeremy Peters.

Note: Morning Joe‘s opening segment was, in essence, a brief in support of the selection of Rex Tillerson as Secretary of State. It was repeatedly mentioned that Bob Gates, James Baker and Condi Rice have praised Tillerson to the Trump transition.

MIKA BRZEZINSKI: Nicholas Kristof writes in the New York Times “The Dangers of Echo Chambers on Campus. Part of it reads like this:

MIKA: — let me get through it.

“terrified students who asked: How could this possibly be happening?

“I share apprehensions about President-elect Trump, but I also fear the reaction was evidence of how insular universities have become. When students inhabit liberal bubbles, they’re not learning much about their own country. To be fully educated, students should encounter not only Plato, but also Republicans.

“We liberals are adept at pointing out the hypocrisies of Trump, but we should also address our own hypocrisy in terrain we govern, such as most universities: Too often, we embrace diversity of all kinds except for ideological . . . We champion tolerance, except for conservatives and evangelical Christians. We want to be inclusive of people who don’t look like us — so long as they think like us.”

Ouch. Yes. That would be a big yes.

HAROLD FORD, JR.: It is embarrassing that every elite conservative or liberal kind of got this race wrong with the exception of a handful. One of the things the country has to do after every race is to raise the hood and understand, Democrats and Republicans. What happened? Why was there such disconnect? David Brooks had one of the better columns during the year when he said I’ve got to leave my office. You and Mika commented on this. Leave this tower I sit in and get out and try to understand what’s happening in the country. Universities: it has to start there. at universities. If kids don’t feel they can have honest conversations there —

FORD: — if the kids don’t feel comfortable having honest, vigorous debates there, or conversations there, it won’t lead from it.

JOE: The arguments are so closed off. I feel sorry for the kids there. I really do because they are so closed off. And this isn’t just Ivy League. Again, I went to the University of Alabama. A very conservative southern state school culturally.

I was a liberal arts major. I can’t remember a single conservative-to-moderate Republican professor I had. They were all obviously Democrats, which again is fine with me. Because I spent my entire life sharpening my arguments. But, again, everywhere you go, if people say you’re right, no matter how weak your argument is, it creates an intellectual laziness that allows you to see your party collapse and you wake up one day and you only have 11 or 12 governors nationwide.

JEREMY PETERS: And this notion that an opposing political view is not just wrong but it’s offensive. That you can’t possibly bear the thought of having to be exposed to the other side’s argument. It’s so corrosive.

RICK TYLER: It’s arrogant, too. If a speaker comes to your campus and you don’t want to listen to him, don’t go to the speech. But to say, I don’t anybody else to listen to him —

For an intentionally left-leaning network like MSNBC to handle this topic this clearly is a credit to the network. I didn’t watch the rest of the show, but this segment is impressive in its candor.

I noticed this occurrence when some my progressive “friends” were meltdowns about this. Good for Kristof for once.

But really, nothing will change.
A few short weeks from now, they will convince themselves that they were right all along .. and who will be there to question the logic ? .. nobody.

Insanity: doing the same thing over and over again and expecting different results — Albert Einstein

Aw hell, they are on to it. Scramble the STA teams. This has to be a quick grab and bag. And somebody tell Brownshirt Trolls to get to work discrediting these people. STAT!

LI: “Uhm Fen, we don’t have any STA Teams. Nor do we have a unit of paid trolls…”

LI: “Nope. No contacts with Russia either”

I am glad to see a glimmer of good sense.

Last weekend, I attended a yoga class that has a side of philosophy, and there was a woman in tears (yes!) over the election, by that time three weeks past. Her acquaintances very kindly calmed her down, pointing out that the half of the country that voted for the president elect was the same set of friends and neighbors as they had been, before.

Just what in the living Hell are the Democrats saying amongst themselves to whip themselves up in this fashion?

In my opinion, the DNC and the Clinton Campaign have sown the wind by encouraging violence against American voters.

Each week since November 8th the journolist managers spin a wheel to see which liberal talking head has to swallow his or her pride and disgust to publish a column, article, or blog post that appears to contain sense, to thereby have a post to which they may point as evidence of their newfound collective fairness and openmindedness. This week was Nicholas Kristof’s turn. Expect his idea to die on the liberal vine within… seven days.