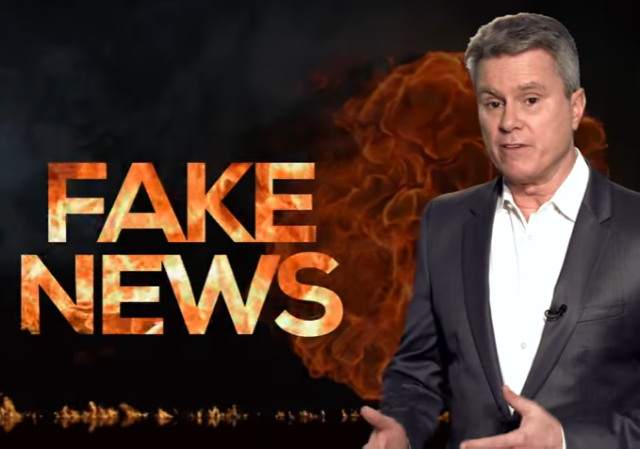 There’s been plenty of talk about “fake news” since the election. In fact, some people in politics and media have even suggested that fake news contributed to Hillary Clinton’s stunning loss.

But what about the supposedly legitimate media. Aren’t they to blame as well?

In his newest Firewall video, Bill Whittle puts it all in perspective.

“AFTER THE CONSTITUTIONAL CONVENTION…”

“IT’S WELL KNOWN THAT BENJAMIN FRANKLIN WAS ASKED WHAT FORM OF GOVERNMENT THE NEW NATION WOULD HAVE. ‘A REPUBLIC,’ HE REPLIED, ‘IF YOU CAN KEEP IT.’”

Now on to the antithesis of everything Benjamin Franklin and the Founding Fathers stood for.

Now that part IS true. Many videos showing Hillary Clinton to be a warm, trustworthy and tough Presidential candidate flooded YouTube, Facebook and all the rest throughout 2016..

Like causing liars, traitors and felons to lose Presidential races.

“THIS ISN’T ABOUT POLITICS OR BIPARTISANSHIP.”

This is Whittle’s key point:

Maybe all this fuss is to turn us away from the realization that EVERYTHING we hear from the main stream media, from the earth is dying hysteria to mom-and-pop bakeries in Oregon is ALL fake news, reported by, presented by, edited by and spun by the mainstream media, which has devolved into the publicity department for the Democratic Party in General and the progressive movement in particular.

One thing is sure. Instead of figuring out that the American people are onto them, the media has doubled down since the election, which means there’s a lot more fake news to come.

What’s the matter, “Ministry of Propaganda” is already taken?

And the so-called “mainstream media” has been the Democrat’s Ministry of Propaganda for decades.

Clearly, the dems, political elites and media types want nothing to do with a constitutional republic or individual rights. May they all go the way of the loyalists after the patriots won the war for independence. They have done enough damage to this country.

It’s rare that I’ll ding a Bill Whittle production, but he engages in “fake news” here.

Hellary Clinton did NOT say that “Americans were a basket of deplorables”.

She simply did not.

She didn’t even say that all T-rump voters were “a basket of deplorables”. If you doubt that, look it up.

There’s some other stuff he gets wrong in this production. Fake news is NOT a puff piece on Hellary being a loving grandma. It just isn’t. No more than a piece on how swell the T-rump children are, or what Ivanka is wearing at an appearance. It is just fluff, but NOT “fake news”.

If we’re not careful with how we use that term, and allow it to be used, it will lose all validity. Just like “racist”.

Well, Whittle does opinion and analysis, so it’s not “fake news,” but you are right that he is wrong. She said half of Trump supporters belong in a basket that she calls the basket of deplorables. Then she “apologized” that she’d said “half.”

I really don’t think we need to protect the true meaning of “fake news”; it’s already been so grossly misused that it is now beyond redemption. And yes, it has already come to mean “anything I disagree with or that I wish were untrue.” Shrug. This fake war on fake news is no longer a serious attempt to silence conservative voices (how it started) and has become a punchline. That’s a good thing. Let’s keep laughing and mocking it; treating it seriously is, in my opinion, a very big mistake.

This is also “fake news”, and you cannot successfully rationalize fake news as “opinion and analysis”, Fuzzy. Not by any standand which I can hold valid. Bullshit is just bullshit, and Whittle was stating something as a fact in support of his presentation…something we know to have been false. I know and understand polemics, and that ain’t it.

Which leads us to a problem I think has to be addressed; we need a good, accepted, and policed definition of what “fake news” means. I agree it can mean the absence of a story that should be published.

What I meant was that Whittle’s “Fake News” piece was not a news report. He wasn’t a journalist presenting the facts of a story; he was opining. When we opine, we can and do generalize or otherwise gloss facts, err, and etc. It’s not an alien notion, right? Op-eds are not “news stories” to begin with, so they cannot be “fake news.”

I’m not sure, Rags, that we want to wander down this path anyway. A lie is fake news, a misspoken word or sentence is fake news, a hyperbolic point is fake news, a Freudian slip or other gaffe is fake news . . . where does it end? The goal of all of this is to silence conservatives, and our jumping on the incredibly asinine “national conversation” bandwagon plays into their hands.

Loonies like Alex Jones proclaiming that FEMA is all set to round up [insert whatever group here] and shuffle us off to detention and/or reeducation camps = fake news.

Mark Twain says quitting smoking is easy (erm, except he didn’t: he said quitting smoking was so easy that he’d done it hundreds of times . . . indicating, of course, that it’s not easy at all) = quoting out of context, intellectual dishonesty (not fake news)

I have a serious problem with this “fake news” thing and think it’s a huge mistake to help progressives in their little crusade against free speech. Look at what they count as fake news, and look at what you do. Whose definition do you think is the one taking root (hint: not yours, whatever it might be).

If we have learned nothing more from the progressive attack on language and culture, we must learn that we cannot win on their own playing field with them changing the rules on a whim. It’s not only doomed to failure (as when we tried to explain what “racist” actually means), but it stops us from engaging on matters that . . . well, actually matter.

She said half of Trump supporters were a basket of deplorables. Your pint is stupid.

My point is factually correct. You are stupid.

She said half of Trump supporters were a basket of deplorables. Your point is stupid.

And every time a Progressive Democrat invokes Christianity and American Freedom, that will be immediately followed by a proposal that reduces American Freedom and is an insult to Christians.