“And who better than Larry? He’s one of the great economists in this country” 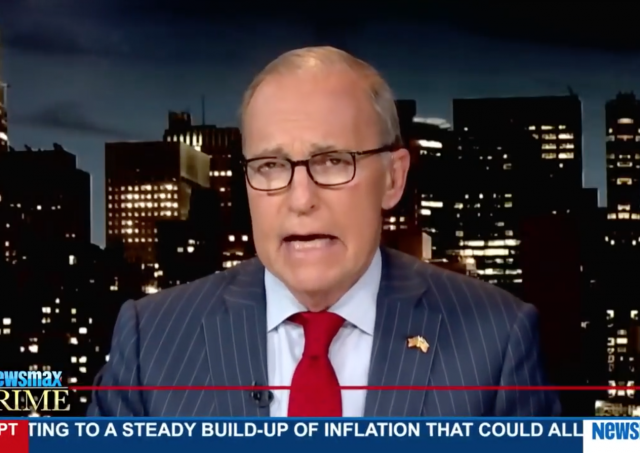 Thursday, a Trump Advisor confirmed CNBC business analyst Larry Kudlow has been chosen to lead the White House Council of Economic Advisers. Kudlow served as an advisor to Trump’s campaign.

Reports suggest the announcement will be official sometime in the next two days.

“And who better than Larry? He’s one of the great economists in this country,” said Moore, who has been advising Trump on tax policy in the transition.

A Trump transition team spokesman could not be immediately reached for comment.

Kudlow, who previously hosted his own CNBC show called “The Kudlow Report,” remains a senior contributor for the business news cable television network.

Trump has drawn criticism for tending towards protectionism over free market principles:

But the two conservative economists had one central disagreement with Trump over trade, Moore said.

Moore said Trump told him and Kudlow they could “agree to disagree” on his plans to renegotiate or walk away from international trade pacts, such as the North American Free Trade Agreement.

“(Trump) said, ‘But I want you guys to work on tax policy and fiscal policy … regulatory policy,’ ” Moore said. “And I respect that … he’s not just going to surround himself with yes men, but people who may disagree with him.”

“We’re going to go from having the highest tax rate to virtually the lowest,” Moore said at Michigan State University’s Kellogg Center. “… Every single small business in America is going to be taxed at 15 percent.”

On Dec 9th according to CNBC, Trump picked Goldman Sachs president & COO Gary Cohn to be National Economic Council Director. What’s the relationship or difference between the two positions?

So Kudlow’s “big idea” to help the economy is for the U.S. to issue 100 year bonds? I’m having difficulty understanding how that would work.

OK, I read the article. I still don’t understand how letting the government fiddle with long term rates will help the economy. What fool would buy a 100 year bond yielding 5% when the real rate of inflation is running twice that? Oh, by “economy”, I mean the dwindling number of Americans who actually produce goods and services (e.g. wealth). If the government actually wanted to help them, it would lower taxes and regulations, and stop spending our children’s (and grandchildren’s) inheritance by running up unsustainable debt. Kudlow’s idea is just more kicking the can down the road.

Kudlow is frequent guest on local news station, has his own show which station also carries, and regularly writes at NRO. So, he is familiar name.

And my, admittedly layman, impression of him is that he is thoroughly mediocre as an economist. He is not a lefty, sure; he just isn’t much convincing as a righty. Main reason he is being picked is that he has been brown-nosing Trump for months.

All about more more more immigrants coming to America.