Nothing says “Happy New Year” like a giant Trump rooster 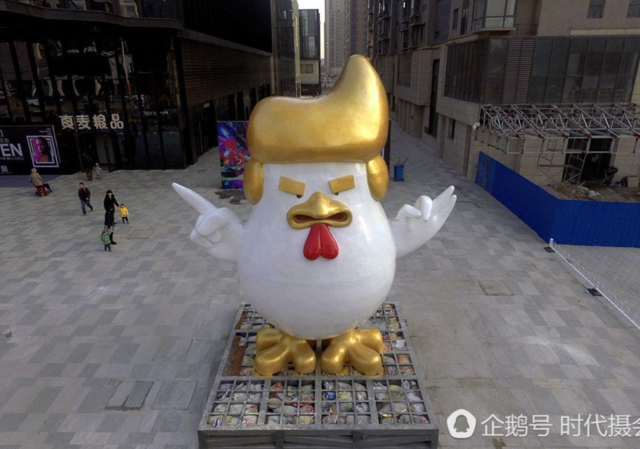 The Trump rooster has arrived to help ring in Chinese New Year. The city of Taiyuan is hoping the statue will bring tourists in by the bus loads.

According to People’s Daily China:

A giant rooster figure, sporting a Donald Trump hairstyle, has popped up outside a shopping mall in downtown Taiyuan, north China’s Shanxi Province. The designer said the sculpture – heralding the upcoming Chinese Year of the Rooster – was inspired by the American president-elect, by both his iconic hairstyle and gestures.

The sculpture was commissioned by the company that owns the mall and will be its mascot, Cao Mingliang, the deputy director of planning department from N1 ArtWalk Mall, told CNN.

Cao said a series of products and smaller replicas will be available for sale in the future, though some are already being sold on Taobao, the Chinese e-commerce giant owned by Alibaba.

“I think the rooster is very cute and funny, the hairstyle and eyebrows look very much like Donald Trump. I’m sure it will attract a lot of customers,” he said.

At least four stores are selling the Trump rooster, with prices starting from $57 to a whopping $1,739 for a statue that’s 32 feet tall.

Somehow, the Trump rooster is perfect. Hilarious and perfect.

I can’t resist being sophomoric — “Look at the size of these wings!”

And, of course, one can accurately observe that the sculpture depicts a giant, highly stylized cock…

These are the exact size of the wings you get at Donald Trumps House of Wings,

It does sort of capture him.

2017 is the Chinese Year of the Rooster.

You can’t say the Chinese Zodiac doesn’t have a sense of humor.

Why did this come to mind?

It kinda makes sense though when you realize that Pence looks like Race Bannon from Johnny Quest.

That’s not ginormous. In this instance, the proper adjective is yuge.

“The rooster’s crowing was significant, as it could awaken people to get up and start to work. In Chinese culture, another symbolic meaning of chicken carries is exorcising evil spirits.”

If they sell the “garden gnome” size here in America for Chinese New Year, I’m going to buy one and put it on my porch.