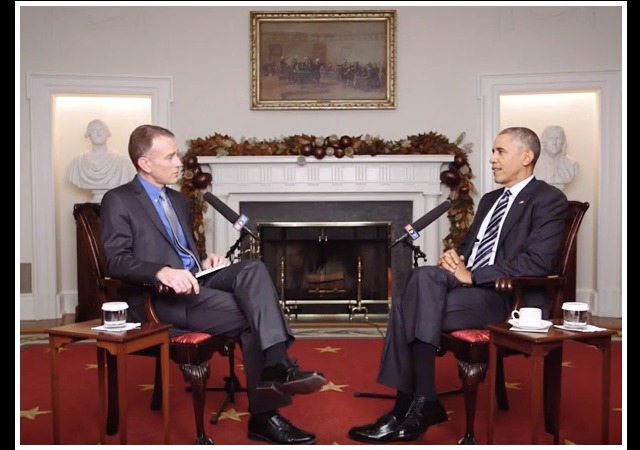 PRECIOUS! During an interview with NPR, President Barack Obama advised president-elect Donald Trump not to abuse the executive orders privilege:

Should President-elect Trump, once he’s inaugurated, use his executive powers in the same way that you have?

I think that he is entirely within his lawful power to do so. Keep in mind though that my strong preference has always been to legislate when I can get legislation done. In my first two years, I wasn’t relying on executive powers, because I had big majorities in the Congress and we were able to get bills done, get bills passed. And even after we lost the majorities in Congress, I bent over backwards consistently to try to find compromise and a legislative solution to some of the big problems that we’ve got — a classic example being immigration reform, where I held off for years in taking some of the executive actions that I ultimately took in pursuit of a bipartisan solution — one that, by the way, did pass through the Senate on a bipartisan basis with our help.

Weirdly enough, his use of executive orders increased as Democrats lost power in Congress. Now he is telling Trump that “it’s preferable to work with Congress” mainly because it will be harder for future administrations to undo the legislation:

So my suggestion to the president-elect is, you know, going through the legislative process is always better, in part because it’s harder to undo.

And that doesn’t mean, though, that he is not going to come in and look at the various agencies and see the rules we’ve passed and if he wants to reverse some of those rules, that’s part of the democratic process. That’s, you know, why I tell people to vote because it turns out elections mean something.

Okay, bro. In his eight years in office, Obama has issued 260 executive orders. Yes, I know President George W. Bush issued 291, but 260 is still a lot! In August, The New York Times even noted that Obama, who once expressed skepticism over executive power, embraced it to “reshape the nation with a sweeping assertion of executive authority and a canon of regulations that have inserted the United States government more deeply into American life.”

Back in 2014, USA Today published an article about how Obama skirted around the executive orders by issuing them as “memoranda,” which means his number is higher than the 260 listed:

He’s already signed 33% more presidential memoranda in less than six years than Bush did in eight. He’s also issued 45% more than the last Democratic president, Bill Clinton, who assertively used memoranda to signal what kinds of regulations he wanted federal agencies to adopt.

Obama is not the first president to use memoranda to accomplish policy aims. But at this point in his presidency, he’s the first to use them more often than executive orders.

“There’s been a lot of discussion about executive orders in his presidency, and of course by sheer numbers he’s had fewer than other presidents. So the White House and its defenders can say, ‘He can’t be abusing his executive authority; he’s hardly using any orders,” said Andrew Rudalevige, a presidency scholar at Bowdoin College. “But if you look at these other vehicles, he has been aggressive in his use of executive power.”

Unlike executive orders, these memorandas are not always published and do not receive any numbers. This means people cannot always count them. At the time of the USA Today article, the Federal Register had 195 executive orders along with 198 presidential memoranada.

So, yeah, I find it precious when Obama and his Democrat allies brag that he has shown restraint by not abusing his power. However, I crack up when Obama warns the incoming president not to abuse executive orders and to work closely with Congress.

I agree! With a GOP House and Senate, pass LEGISLATION, sign it with a flourish, then slam it in their face!

Well, yes, but after issuing one executive order on day one that rescinds every EO and memorandum issued by Ogabe. Then, by all means, press forward with legislation in regular order.

Keep in mind though that my strong preference has always been to legislate when I can get legislation done.

Excuse why I stop choking.

Trump can lead by example by rescinding every single EO issued by Obama.

Irony alert! The sad thing is Obama does not recognize that this is irony. He doesn’t see it. He doesn’t get it. You can’t explain it to him. This is an example of where the conman conned himself. The emperor has no clothes, but you can’t convince him of that. Till the day he dies, Obama will think is the greatest person who ever lived.

It’s amazing how he projects every single one of his own faults onto Trump. Mind boggling.

And seems to have no conscience while doing. No shame at all…

Oh I think he does know. He’s just so arrogant that even though he’s gone January 20th he still wants to keep telling everyone he’s the smartest person in the world.

“I held off for years in taking some of the executive actions that I ultimately took in pursuit of a bipartisan solution”
He also knows that if he got even one repub, he could claim the cloak of bipartisanship.
Well hopefully come January 20th the gloves come off and he’s told to bend over for some bipartisanship.

If there was a Nobel Prize for arrogance, he would have won two.

Nothing new here. Mike bends him over all the time.

O’s advice to the next generation of Democrat grifter masters, “Now the first thing ya gotta do is develop this big chip on ya shoulder. And once there, keep it there. A steady sense of entitlement will help a lot, especially if ya got affirmative action working for ya. And Joe BIden’s right when he said this about me, ‘I mean, you got the first mainstream African-American who is articulate and bright and clean and a nice-looking guy. I mean, that’s a storybook, man.'”

I hate to oversimplify things, but really, this guy is just an asshat.

I hate being a grammar Nazi, but you misspelled ‘hole.”

“Keep in mind though that my strong preference has always been to legislate when I can get legislation done.”

What an arrogant twat. What he means is that it’s his way or the high way. Fuck you Obama, good riddance.

In other news Gus Bradley has left instructions on how the new Jacksonville coach should use Blake Bortles .

He just can’t shut up.

Suggested Trump response: “Thanks, Barack, for the advice. Don’t steal any silverware or let the door knob hit you in the ass on the way out of the White House, okay?

Mr m1: I would remind you that Eisenhower had just successfully completed a war and around those rounds of golf he rehabilitated both Germany and Japan. Lay off.

“So my suggestion to the president-elect is, you know, going through the legislative process is always better, in part because it’s harder to undo.”

Obama should know, most of his crap is about to be undone. The sad part is, families have already paid extra thousands for their crappier health insurance and Iran has already received their billions.