Dem on Trump: ‘To kill a hog, you have to jump down in the mud sometimes to get him’

Dem on Trump: ‘To kill a hog, you have to jump down in the mud sometimes to get him’

What if a Republican had said something similar about President-elect Obama in 2008? 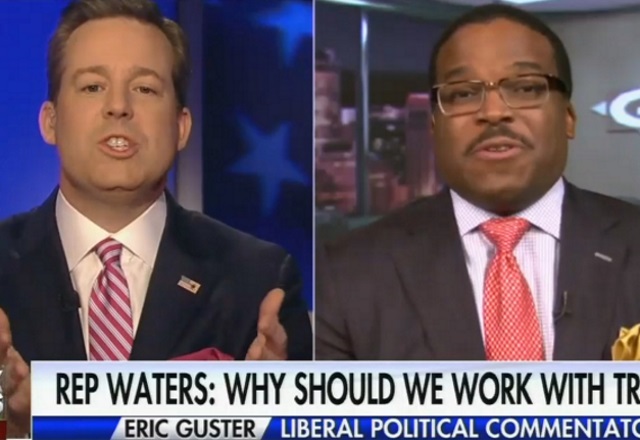 Donald Trump has not yet been inaugurated, but at least one Dem is talking—figuratively we presume—about what it would take to “kill” him.

On Tucker Carlson’s Fox News show this evening, guest host Ed Henry was questioning Dem attorney Eric Guster about Rep. Maxine Waters’ statement that she would not meet with Trump if invited to do so. What about Michelle Obama during the campaign saying “they go low, we go high,” wondered Henry? Responded Guster: “if you’re going to kill a hog, you have to jump down in the mud sometimes to get him.”

Need we bother to observe that—after the election of Barack Obama in 2008—if a Republican had speculated on national TV, even in the most figurative terms, as to what it would take to “kill him,” the MSM would have had a collective meltdown?

But we can say with some confidence that this Dem’s presumably facetious remark about killing Trump won’t cause even the slightest ripple in the liberal media.

ED HENRY: Okay. Let’s get something, I know you also want to talk about this. Maxine Waters is a senior member of the Congressional Black Caucus. In terms of whether or not she will work with this incoming president, here is what she told MSNBC.

MAXINE WATERS: I have no intention of pretending everything’s all right. That we’re going to work together. For me, as the ranking member of the Financial Services Committee, where he said he is going to bring down Dodd-Frank and he is going to get rid of the Consumer Financial Protection Bureau. I’m going to fight him every inch of the way. And I would hope.

MSNBC HOST JACOB SOBOROFF: Congresswoman, if I could just interrupt here one second. Excuse me. I just want to get this straight. Are you saying then that you would not sit down with President-elect Trump if he invited you to the White House to meet on common ground?

ERIC GUSTER: That’s a very complicated issue, Ed. But I love Maxine Waters. And I love her digging her heels in and fighting for what she believes in.

HENRY: I’m all for fighting but she won’t sit down with the man?

GUSTER: He was the most divisive candidate that we have seen in decades. And I understand her position.

HENRY: My question to follow up for Maxine Waters and for you is, what happened to Michelle Obama in the campaign saying they go low, we go high?

I assume this ass has spent a lot of time in the pig pen eating slop.

Guster: “if you’re going to kill a hog, you have to jump down in the mud sometimes to get him.”

Says the man who has clearly never seen, let alone killed, a hog in his life.

Full-grown hogs are around 400 lbs, are unbelievably strong, extremely territorial, and have real short tempers and a bite that literally crushes bones. There’s a reason that hunters who go after feral hogs prefer to do so at ranges exceeding 100 yards. Or why, if they must go “in the mud”, they take dogs with them, and the dogs wear kevlar.

Nobody in their right mind wants to go toe-to-toe “in the mud” with a hog. Guster is full of gusto, but lacking in sense.

Domestic hogs are double that weight, but no easier to deal with. Only a mindless idiot who’s never dealt with hogs talks so cavalierly about “jump down into the mud sometimes to get him”. He’ll get you, not vice-versa.

all democrats are pigs.