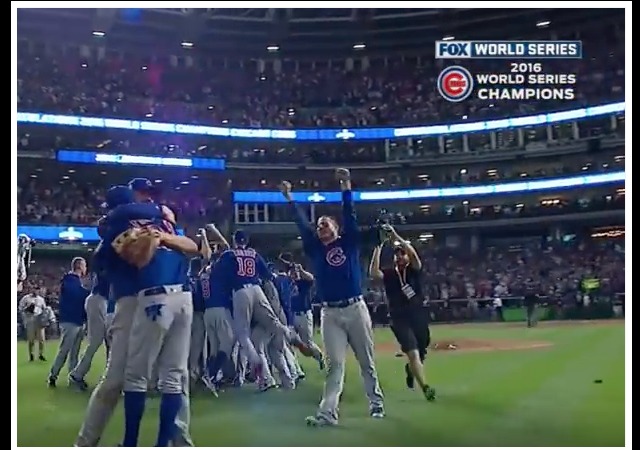 As Professor Jacobson described me correctly when he called me a batshit crazy Cubs fan. I am hopelessly devoted to them and you could not imagine my joy when the team not only went to their first World Series in 71 years, but won the championship for the first time in 108 years. It should come to no one’s surprise that the Associated Press named the Cubs World Series win its Sports Story of the Year:

The Cubs’ first World Series title since 1908 is the runaway winner for top sports story of 2016, collecting 48 of 59 first-place votes and 549 points in balloting by AP members and editors. The death of Muhammad Ali after a long battle with Parkinson’s disease was second with 427 points, and LeBron James leading the Cleveland Cavaliers to the franchise’s first NBA title took third with 425 points.

In a year that seemed to be more about what we lost (Ali, Arnold Palmer, Gordie Howe, Pat Summitt, Jose Fernandez and the plane crash that killed most of the Brazilian club soccer team Chapecoense) than the winners on the field, the Cubs provided a feel-good moment that warmed at least the north side of Chicago well into the city’s notoriously brutal winter. They drew huge ratings throughout the playoffs, with much of the country tuning in to see if it finally was the year.

“I think a lot of casual fans were initially drawn to the Cubs in the postseason because of the 108-year drought and the curse narrative,” president of baseball operations Theo Epstein said. “But when they tuned in, they saw a talented team full of young, exciting players who are also team-first, high-character people.”

Kris Bryant. Anthony Rizzo. Javier Baez. The list goes on. Not to mention the fact that this was beloved catcher David Ross’s last season. And who doesn’t love manager Joe Maddon? The World Series also saw the return of popular catcher/outfielder Kyle Schwarber, whose regular season ended in April with a leg injury.

Plus, Game 7 is one for the ages. The Cubs came back to tie the series after the Indians took a 3-1 lead. The teams kept exchanging the leads through the game. I think I felt every emotion possible! Then tied….to make it worse, RAIN DELAY. But why not? I mean, the game had everything else after all! But the delay became a blessing:

After Chicago blew a 6-3 lead in the finale, outfielder Jason Heyward got his teammates together during a short rain delay before the top of the 10th. The Cubs caught their breath, and then finished off the famed Billy Goat Curse with an 8-7 victory that will live on in the bars of Wrigleyville for many years to come.

“The players-only meeting during the rain delay was emblematic of this team,” Epstein said. “Instead of lamenting the blown lead or pointing fingers, the players rallied around one another and picked each other up.”

(I admit I cried when I rewatched that video.)

I think my friend Ollie, who loves baseball as much as I do, is the only one who could possibly understand exactly how it felt to win the World Series. It’s hard to put the emotions into words, but all I know is that I can die in peace. I never though I’d see my Cubs win the World Series.

The better part? The jokes and jabs will end! No more talk about goats, black cats, and Bartman.

Congrats to the Cubs, but I would have loved to see my Indians win! As Cleveland sportsters always say, “There’s always next season.”