DOJ Official Sent Podesta a ‘Heads Up’ On Hillary Emails

DOJ Official Sent Podesta a ‘Heads Up’ On Hillary Emails

Conflict of interest much? 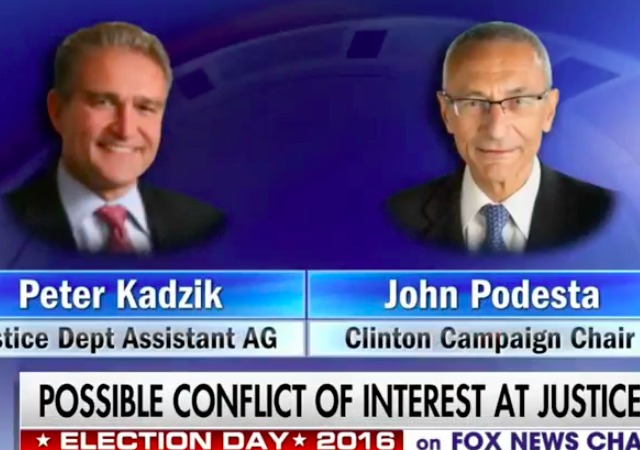 Not only does the media collude with Hillary Clinton, but a Department of Justice official leaked information to the campaign about the investigation.

Assistant Attorney General Peter Kadzik, who is also involved with the probe into emails found on Huma Abedin and Anthony Weiner’s devices, warned John Podesta, Hillary’s campaign chair, when the State would release the emails and on hearings: 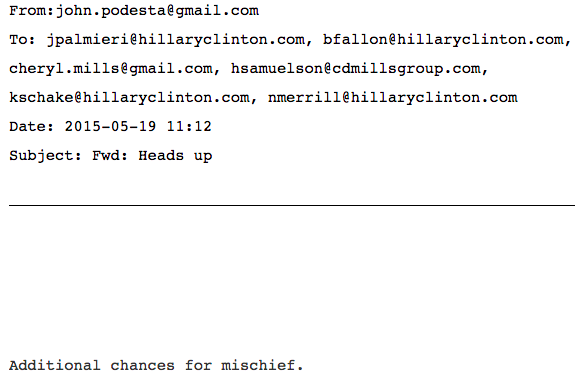 I wrote about Kadzik yesterday when outlets reported he is involved with the new probe and promised Congress the DOJ will provide “quick work” on the new investigation.

Now, the DOJ said Kadzik “is not directly overseeing the investigation and his job is to respond to inquiries from Congress.” But Kadzik does “have the power to deny a request for a special prosecutor.” He did just that last November when GOP lawmakers asked “to appoint a special counsel to lead the investigation.”

Plus, as the email shows, he has channels through the DOJ, which allows him to acquire information and pass it to Hillary’s campaign. Kadzik works in the legislative affairs department.

In one Wikileaks release, Podesta sent an email to President Barack Obama aide Cassandra Butts in 2008 about Kadzik, saying the lawyer “kept me out of jail” and the campaign should bring him on to help. Podesta did not specify which incident Kadzik kept him out of jail, but he represented Podesta during the Monica Lewinsky investigation after he “had made false statements to a grand jury impaneled by independent counsel Kenneth Starr.”

Kadzik also represented Marc Rich, who the IRS wanted for evading a $48 million tax bill and the government also believed he was involved “in illegal trading activity with nations that sponsored terrorism.” He “lobbied Podesta heavily,” who was President Bill Clinton’s chief of staff. An Oversight Committee report in 2002 concluded that Rich recruited Kadzik because of his connections to Podesta.

Clinton eventually pardoned Rich on his last day in office.

Weirdly enough, late yesterday, the FBI posted documents associated with the Rich case. The FBI heavily redacted many of the 129 pages, but as The New York Post points out, the agents left just enough information “to demonstrate that the FBI had taken a sweeping investigation into charges that the pardon was a payoff.”

Rich’s ex-wife Denise donated a lot of money to the Democrats and the Clinton Foundation. A memo said the details show “that required pardon standards and procedures were not followed.”

One more thing. The only person at the DOJ to receive notification of the pardon? Then-Deputy Attorney General Eric Holder. Yes, THAT Eric Holder.

This is it, America: If Hillary wins your destruction is a done deal.

At first glance, FBI release of the Marc Rich material seems peripheral. But the Rich case was yyooouuuuuggggeee; the biggest case of tax evasion in US history, as well as racketeering, wire fraud, trading with a terrorist state, etc. Then when Billy Jeff threw the big prize fish back in the water for nothing but a (hypothetical) tawdry bit of bribery (not to mention a tawdry bit of Denise Rich), there was a lot of grumbling in law enforcement circles. Even FBI types made the news with their grousing … which is very unusual for what even today is usually a rather tight-lipped bunch. I wouldn’t be terribly surprised if some old career men in the Bureau figured that if this is payback time, that would be no bad thing.

Now, to be fair, Bill can’t be blamed for hanging around very polite people in his inner circles.

They said “Pardon me” when they bumped into him back in the day, and Bill, ever the southern gentlemen, did.

The beauty of running a political party like a crime syndicate is that you can count on your minions in “key locations” to do your bidding without every having to make direct contact and without leaving a trail. Capo Clinton has learned to master this after 30+ years of practice.

Giving a “head’s up” to people involved in a criminal investigation is highly unethical. So, will someone in Congress take the usual strong action and send a letter to DoJ requesting an investigation? Hey, maybe they could hold hearings and ask – ever so politely – if Kadzik remembers doing this?

What do you expect Congress to do? I mean, according to their charter under the Constitution.

I don’t know that there’s anything “unethical” about passing along information that an investigation may be launched. Maybe you could point to a canon of ethics for us, because it is not really that uncommon in criminal law practice.

You may not like it…I don’t…but lets stay in reality.

Why did you put unethical in scare quotes?

Ah c’mon Rags, don’t be a coward with the down vote. Explain yourself – why did you put Ethics in scare quotes?

Ring and Run Rags has a nice “ring” to it. LOL.

Obviously this is simply a subtle aspect of NAFTA: we have imported Mexico’s method of governance.

When the DOJ is full of Chimps you end up with a Banana Republic.

Congress can legally install a special prosecutor. But of course they won’t. If Trump is elected his Attorney General can appoint one.

In a bygone era, this would have been grounds for immediate dismissal. In today’s climate of political cronyism, it is the normal thing to do. Since Donna Brazille has been exposed for passing debate questions on to hillary, there hasn’t been one single Demorat to ask her to step down from her leadership role at the DNC. Nor has there been any criticism of hillary for accepting the illegal info. I am sick that I have to vote for the likes of Trump but compared to the totally unethical and self-serving grifter called clinton, I will willingly vote for him to stop her. She has refused to name one single SCOTUS that she is considering and we can only guess what that means. If any of you have seen the YouTube about her meltdown after the townhall with Lauer you know how unstable she is and what a threat to the entire world she would be. I did not know that she does not allow any of her staff to have cell phones when she is at an event such as the townhall. That is why there is never any videos of her going nuts. Google YouTube for this story.

On a related note, Hillary’s IT guy that ignored a subpoena to appear before Congress? Did anything ever happen to him?

I remember my younger days, when I failed to appear in court. I spent the night in jail and got 3 months probation with a 60 day jail term hanging over my head if I violated probation.

And the GOP wonders why no one respects their investigation.

So what happened to the IT guy? Did he even gat a harsh letter?